Despite failing to prevent terrorist attacks so far, Egyptian President Abdel Fattah al-Sisi has made more promises to increase security in the wake of attacks on two Coptic churches on Palm Sunday. 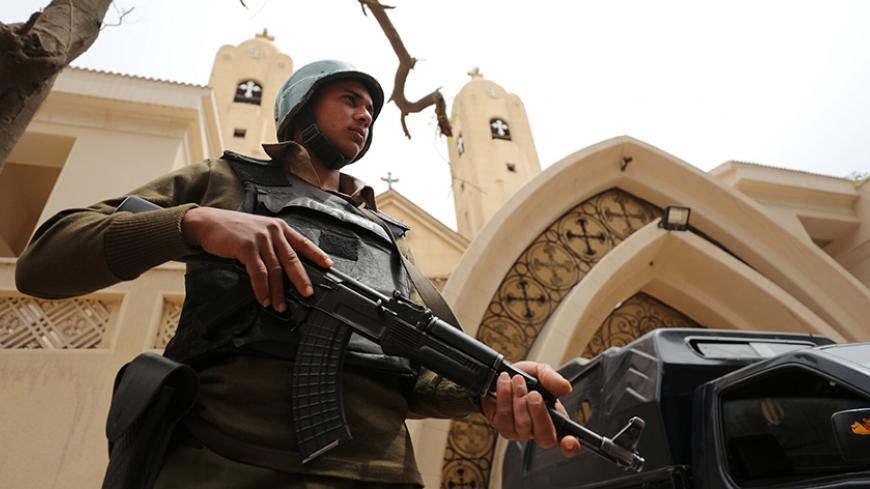 In December 2016, the Islamic State (IS) bombed St. Peter and St. Paul Church in Cairo, killing 29, and in the aftermath declared that there will be more attacks on “infidels.” A week before Palm Sunday, a Christian feast celebrated the Sunday before Easter, a bomb was found and defused at St. George’s Church in Tanta in Al Gharbeyya governorate. On Palm Sunday, thousands of Christians all over Egypt headed to their houses of worship, making them easier targets for terrorism. At 9:05 a.m., an IS suicide bomber blew himself up from inside the prayer hall of the same Tanta church, claiming the lives of at least 28 and injuring 71.

“The explosion in Tanta was a huge security failure. The terrorist walked into the church from the front door,” said Mina Thabet, a researcher on minorities and vulnerable groups at the Egyptian Commission for Rights and Freedoms.

A few hours later, a second church was attacked. Another IS suicide bomber detonated a belt at the gates of St. Mark’s Cathedral in Alexandria, right after Pope Tawadros II and other leading religious and government officials left. There is a possibility that the attack was targeting the pope, Thabet said. Nevertheless, 17 people died and 41 were injured.

“A terrorist organization stated whom they were going to target and when, and then you have this catastrophic security performance. They should have been very alert,” said Aly El Raggal, a political sociologist. It was ’Am Nseem, the church’s guard, who stopped the bomber from entering the church.

In December, President Abdel Fattah al-Sisi vowed punishment for those behind the terror, and he promised to increase security. It was the same promises that brought Sisi to power in 2013, when millions took to the streets to authorize a man with a military background to get “rid of terror,” while two demonstration camps demanded President Mohammed Morsi’s return. Sisi violently dispersed the camps and made the war on terror his mission.

Yet multiple attacks have been carried out since, most of them in el-Arish in the northern Sinai Peninsula. Sinai is where the militants reside and operate. The crisis reached its worst when 300 Copts were forced to leave their homes after seven civilians were murdered. IS threatened that others would follow, Thabet said. “There is no security in that area.”

Ashraf El Sherif, a professor of political science at the American University in Cairo, said IS’ strategy in Egypt has multiple goals: portraying the regime as a weak one that is unable to provide security and stability, shaking the state’s credibility and frightening religious minorities.

Security is lacking, but the state will never admit it, as this would take away the base of its legitimacy, Sherif said. He added that the state would never assume accountability and allow public and community oversight of its actions.

Security industry veteran Ayman Ashour argued that Sisi is winning the war on terror on the security front, yet the security apparatus can still improve.

“The system of rotations of security officers makes it hard for professionals to become experts in their roles and their environment. The system of creating bottlenecks at entrances of airports, churches or road checkpoints is not compatible with the nature of threat that Egypt faces. Terrorists want crowded bottlenecks to cause maximum damage,” he explained. “An additional point is the incredibly long shifts security operatives work and the lax supervision over their professional performance,” Ashour added.

However, Raggal believes that there is “something fundamentally wrong” with the security system. “It thinks in terms of repression and not in terms of providing smart and soft security,” he said.

“Is this the security we gave up our freedoms for?” said Shady Nour on social media.

Indeed, the clampdown on dissent in the name of security has left Egypt with more than 40,000 political prisoners, a muffled media, forced disappearances, extrajudicial killings and the Ministry of Interior electronically spying on citizens, amid other measures taken under the umbrella of the “war.”

The problem of terrorism is not the main problem, stressed Ashour, adding, “You have unprecedented political and societal polarization, and Egypt ultimately needs a path of reconciliation with the Islamist elements that can be peeled off extremism. You have societal and political failures that no security can fix.”

Sherif added more pieces to the puzzle: “Terrorism is a derivative problem in Egypt. It is derived from other crises that are the fundamental ones, such as inclusive state-society relations … and of course religious reform and economic restructuring.”

In the IS statement that claimed both attacks on Palm Sunday, the group vowed that “children of Copts will pay in rivers of blood.”

On Sunday night, Sisi gave a speech where he assured that the two attacks were not a result of lax security. Yet he announced a state of emergency for three months. The public, which had been expecting Interior Minister Magdy Abdel Ghaffar to be fired, now expects more oppressive measures. The parliament, which was to question Abdel Ghaffar over security negligence and Justice Minister Ahmed El-Zend for failing to amend the criminal law as decided in December, dismissed the general committee session.

On the night of the attack, the issue of pro-state Al Bawaba newspaper that was to be distributed the next day was confiscated after it pointed fingers toward lax security.

“We declared our opinion that there is a shortage in security, which calls for holding those accountable responsible, and changing the current security strategy,” the newspaper said.

The state of emergency is not effective because the regime has been already employing utmost repression, to no avail, said Sherif.

“Too much militarism, too much money, too much violence, and very little efficiency,” Raggal concluded.

On April 10, the day after the double attacks, a reporter walked into a church, carrying a bag, without being inspected.