Egypt's Coptic Orthodox Church has maintained a ban on Copts visiting holy sites in Israel and Palestine since 1978, but some are debating its merit. 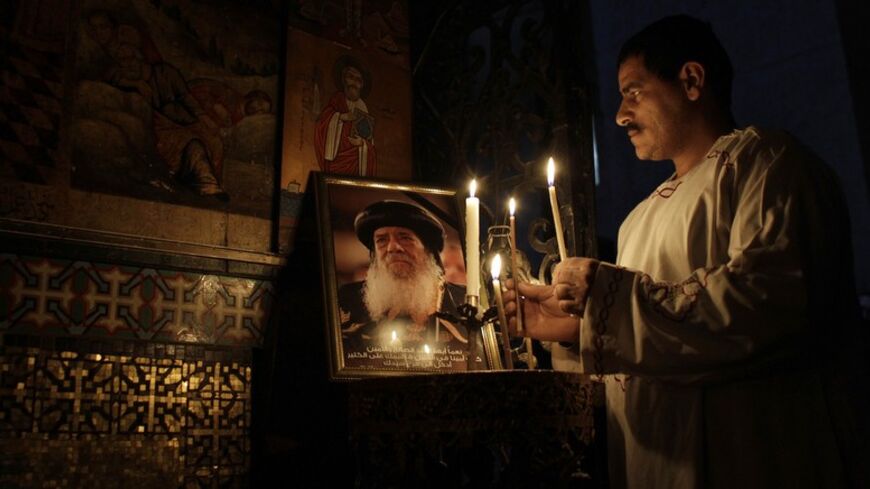 A Coptic Christian priest holds candles next to a picture of Egyptian Coptic Christian Pope Shenouda III in the Church of the Holy Sepulchre in Jerusalem's Old City, March 18, 2012. - REUTERS/Ammar Awad

"It was always one of my greatest hopes to go inside the tomb of Jesus Christ," he smiles, talking at length about the Garden of Gethsemane, the Old City and the Holy Sepulchre. "It was always a dream for me, to live it — not just to see it." To do that, Lotfy had to disobey a decades-old church order banning Copts from visiting Jerusalem. "I want to go again and again, but we must respect the order of our pope."

Lotfy is a practical man, but talks piously. On the wall behind his desk, a photograph proudly shows Lotfy meeting Pope Shenouda III, the former head of Egypt's Coptic church and the man responsible for the 1978 ban, before his death in March 2012.

Shenouda was a soldier during the 1948 war against Israel, and his ban was a response to Israel's occupation and the Camp David Accords and 1979 treaty, which are still unpopular with many Egyptians. The ban was also in response to the failure of Israeli courts to return the Deir El-Sultan monastery to the Coptic Church. The monastery has been disputed by Egyptian and Ethiopian churches in the Holy City for decades — yet another story of appropriation, dispossession, claims and counter-claims in a city that has become internationally recognized for such controversies.

"From the Arab national viewpoint, we should not abandon our Palestinian brothers and our Arab brothers by normalizing our relations with the Jews," Shenouda reportedly said in 2002, arguing the ban's motivations were twofold. "From the church point of view, Copts who go to Jerusalem betray their church in the case of [Deir El-Sultan] that Israel refuses to give to the Copts." According to the church, Copts shouldn’t go to Jerusalem until the city has been “liberated.”

Shenouda's successor, Pope Tawadros II, has maintained the ban. But Lotfy says he was not aware of this until after he’d planned his trip, got permission from a Catholic vicar in Alexandria and taken the Air Sinai flight to Ben Gurion Airport.

This year has been no different. Al-Masry Al-Youm cited Father Royce Morcos, official spokesman for the Alexandrian Coptic Orthodox Church, as saying that those violating the ban would be punished. All the while, the newspaper reported, at least 300 Copts had left for Tel Aviv ahead of Palm Sunday.

In the past, those violating the ban could face "ecclesiastical punishment," including one-year excommunication or — as some Coptic Christians told Al-Monitor — smaller punishments, like not being allowed to take communion for short periods of time.

Egyptian Christians can't always just pack up and go to mark the "Week of Pains" — the week between Palm and Easter Sunday. For younger Egyptians, some of whom feel more of a link with Palestine, Jerusalem is that place across the desert they may not get to see.

Nonetheless, Tamry believes being in Jerusalem is a more useful act of solidarity. "Going to Jerusalem and visiting Palestine is pro-Palestinian," he says. "It's about being close to the Palestinians, which is better than being far away and just shouting from Egypt." Tamry claims it's about bearing witness to the Israeli occupation and talking face-to-face with those living under it, as well as making a pilgrimage to the holy sites.

There is also not always consensus within the church itself. Bishop Marqos of Shubra El-Khemeina diocese best summed up his position in 2009 during an interview: "Pilgrimage. Absolutely not. But for business, it's OK." Coptic businessmen are purportedly free to go to Israel for work, while multi-billionaire Copt Naguib Sawiris, ranked as the 13th-richest Arab according to Forbes Middle East, is known to have several business links in Israel.

Palestinian Christian organizations have meanwhile told Copts to not go on pilgrimage as an act of boycott.

The so-called Kairos Palestine Document of 2009 marked a call by Palestinian Christian organizations endorsing "nonviolent resistance" against the Israeli occupation. Kairos — meaning "moment of truth" in Greek — calls on "all the churches and Christians in the world" to take a "position of truth with regard to Israel’s occupation of Palestinian land." The document was signed by an Egyptian Coptic representative in Jerusalem.

"Palestinian civil organizations, as well as international organizations, NGOs and certain religious institutions call on individuals, companies and states to engage in divestment and in an economic and commercial boycott of everything produced by the occupation," it says, directly allying itself with the Boycott, Divestment and Sanctions Movement.

Refaat Kassis, Kairos Palestine's general coordinator, says that bans like Egypt's operate as a peaceful form of resistance to occupation and Arab Christians should adhere to them.

"We feel that visiting Jerusalem while it is under occupation is an act of normalization with the occupation," he told Al-Monitor from Bethlehem. "So we prefer that these visits not be conducted while Jerusalem is still under occupation."

But can Egypt's Coptic Church economically boycott Israel, urging businessmen to cut ties, and still allow ordinary Copts to go on pilgrimages? Isn't it easier for Egyptians to build solidarity with Palestinian Christians if they actually go to Jerusalem? "I've heard this argument many times before, but actually even when Egyptians or others come to the Holy Land, most of the time they fail to use this as an act of resistance," Kassis claims. "Guides are monopolized by Israeli operators who don't allow [visitors] to see what's really going on. In practice, these visits do not function as an act of resistance or an act of solidarity with the Palestinians."

Lotfy admits this was the case during his pilgrimage last year. "For the Israelis, this is income," he says. "It's business."

"If there's an Israeli and a Palestinian, and the Israeli offers the same for a better price, why not buy from him? I bought lots of stuff from Israelis in Jerusalem. I don't care where he's from."

The pilgrimage is a journey ridden with complications. It is a much-sought-after opportunity for religious observances in the Holy City, but in Jerusalem, politics is never far away.

"Whether we like it or not, there is a connection between politics and religion," says Kassis. "So visiting the holy shrines … it can wait." Perhaps it's not what people believe in, but whether they believe that Jerusalem will one day be the “liberated” Palestinian capital, that defines their decision to pilgrimage or boycott.