Turkey’s Department of Religious Affairs elicited protests from an unexpected quarter when it added Jerusalem to its Umrah pilgrimage. 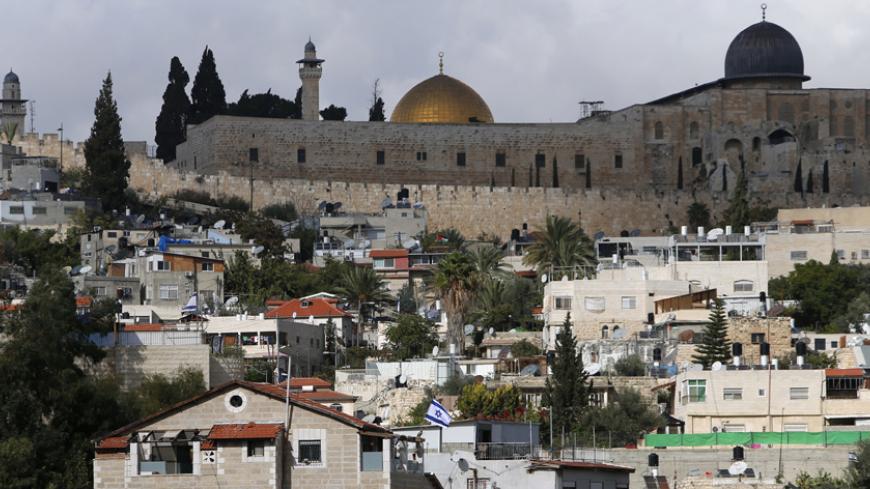 The Dome of the Rock and Al-Aqsa Mosque are seen in the background as an Israeli flag flutters from atop a home of Jewish settlers in Silwan, a mostly Palestinian district abutting the Old City, Nov. 3, 2014. - REUTERS/Ammar Awad

Director of the Department of Religious Affairs (DRA) Mehmet Gormez delighted Turkey’s Muslims when Jerusalem was added to the itinerary of Umrah tours (the noncompulsory pilgrimage to Mecca and Medina). Gormez first announced Jerusalem’s inclusion on the tour the last week of December 2014, saying that an agreement was reached with Israel. Interestingly, negative reactions came from a small group of Palestinians.

The DRA added Jerusalem to the tour in response to heavy demand, and the first group of 149 pilgrims and five officials left Istanbul’s Ataturk Airport for Tel Aviv on April 15. Palestinian activists, charging that inclusion of Jerusalem on the Umrah tour means legitimizing Israel’s occupation, launched a campaign against the DRA decision.

Bearing in mind that Israel-Turkey relations have not been normal since the Israeli attack on the Mavi Marmara flotilla going to Gaza in 2010, the DRA’s decision could be interpreted as a new step in that direction. Preacher Burhan Sener, accompanying the group as a DRA escort, said, "The entire Christian world is there to visit the church from where Prophet Christ ascended. Jews are there to visit the Wailing Wall. Only Muslims were staying away. The step by the DRA will be a significant material and spiritual support to Palestinians."

Sener said that, with visas obtained from Israel, the group will go to Jerusalem for a three-day visit via Tel Aviv. They will visit Al-Aqsa Mosque, the Dome of the Rock, Hebron, the Dead Sea and a list of holy sites before going to Amman and flying from there to Mecca. According to the DRA’s website, during their Umrah trip that costs $1,695-$1,780, visitors will stay at the Royal Wings Hotel in Jerusalem.

Yasar Capci, the chief of of Umrah Services at the DRA, said that his department's adding Jerusalem to the Umrah trip was a historic first for Turkey. Jerusalem used to be included in Umrah pilgrimages during the Ottoman reign.

Every year, about 400,000 people participate in Umrah tours to Mecca and Medina. This number is bound to increase with the addition of Jerusalem.

What were the objections of the Palestinian activists?

Boycotting Israel in Support of Palestine Initiative held a press briefing in front of the DRA's Ankara offices a week before the first tour left. The group declared that hundreds of thousands of Palestinians are forced to live away from their land and do not have the right to go to Jerusalem or even have the right to buy property in this city. "Visiting Jerusalem means supporting Israel," the group said.

The Palestinian group continued their protests April 15 as the first tour group was leaving Istanbul. “We are calling on Turkey’s Muslims to protest this support given to Israel’s apartheid regime on pretext of Umrah," the group said.

Palestinian activists speaking to Al-Monitor said that the baggage of the Umrah passengers was not checked at the Tel Aviv counter of the airport, but rather at check-in counters marked London and Manchester, using for the first time a sign that said, "Istanbul-Jerusalem."

A spokesman for the activists said that the Palestinian Businessmen Union had earlier contacted the DRA requesting that the trip be made via Jordan using West Bank travel agencies, thus contributing to the Palestinian economy. But somehow Palestinians were left out of the equation.

Sener, answering questions at the airport, said the group will stay in East Jerusalem, yet their hotel is located in Jewish West Jerusalem. A Palestinian activist said, "As you can see, this has nothing to do with financial support to Palestinians."

It may not be easy to understand so harsh of a reaction from Palestinian activists in a country where tough statements about Palestine are routine. Although there are incessant calls for "freedom for Gaza" from the media and political rostrums, calls for boycotting Israel don’t garner much support.

During the late Egyptian President Anwar Sadat’s sensational visit to Jerusalem in 1977, which led the way to the 1979 Camp David agreement, Israeli Prime Minister Menachem Begin had invited the Egyptian Copts to visit Jerusalem for a pilgrimage.

When Sadat informed the head of the Coptic church, Pope Shenouda III, of Begin’s offer, the answer was: “I am sorry Mr. President, but I can’t accept this invitation.”

After Sadat quickly ended their meeting, Shenouda III answered questions from journalists: "To visit Jerusalem with [an] Israeli visa means contributing to Israeli occupation and their shedding of Palestinian blood. Although Copts dream of pilgrimage, I can’t allow the Copts to be put in that position. Copts can go to [the] Holy Land only when their Muslim brothers can."

Later, the Coptic Church Council presided over by Shenouda III banned trips to Jerusalem so long as it was occupied. Sadat, infuriated by the refusal of Shenouda III to change his mind, removed him from the head of the council in 1981 and punished him by exiling him to the remote church at Wadi el-Natroun.

Shenouda III was confined to that church for about 40 months and returned to the head of the church in 1985 with an amnesty declared by Hosni Mubarak. Shenouda III said, “I am inviting the Copts who are dreaming of going on pilgrimage to restrain themselves. It is not yet time to go to Jerusalem. There is still no peace, and Palestinians still suffer under occupation.”

Copts obeyed Shenouda III’s call until his death in November 2012. The Coptic church’s official position did not change with the new pope, Tawardos II.

Paul Khalil, spokesman for the Coptic church, said, “Our position of not permitting Christians to go to Jerusalem until our Muslim brothers are allowed as well is clear.”

Later reacting to reports that Copts had begun visiting Jerusalem, Khalil said those violating the rule will be punished.

A similar argument broke out in January 2015 between Al-Azhar University and the Organization of Islamic Cooperation (OIC). Iyad Amin al-Madani, the secretary-general of the OIC, issued a call to visit Jerusalem. Deputy President of Al-Azhar Abbas Shuman said they would reject this call, continue with their boycott of the occupation and not permit normalization with Israel.

Despite much rhetoric about Jerusalem, there is no such debate about a boycott among Turkey’s Muslim communities and the DRA. It appears that the Palestinian activists are getting more solidarity from anti-Zionist Jews than the Muslims of Turkey.