The Coptic Church in Egypt is not happy about some of its followers joining the Salafist Nour Party, whose platform it believes is sectarian and anti-Coptic. 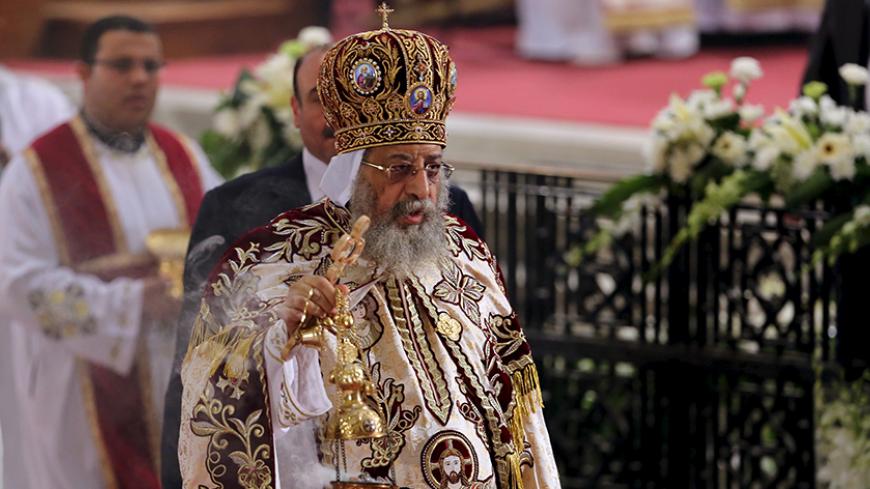 Coptic Pope Tawadros II, head of the Coptic Orthodox Church, carries a censer of burning incense as he takes part in a ritual as part of a Coptic Orthodox Easter mass at the main cathedral in Cairo, April 11, 2015. - REUTERS/Mohamed Abd El Ghany

CAIRO — Pope of the Coptic Orthodox Church Tawadros II (the 118th and current pope of Alexandria & Patriarch of the See of St. Mark) issued a Aug. 1 decision barring Egyptian Christian Copts from joining the Salafist Nour Party. While the church is not legally allowed to issue official decisions in Egypt, Coptic activists told Al-Monitor that the parishes received oral instructions from the pope's secretariat to keep track of the names of the Copts who join the Nour Party, in preparation for barring them from the church.

Many young Copts were upset. Most of them belong to Coptic 38, a group that objects to the Egyptian Coptic Church’s refusal to grant young people permission to remarry.

These young people expressed their discontent over the pope’s position, protesting that he has always declared that the church is a religious institution dissociated from politics and that its places of worship are for only that. These young people consider their participation in any political party a question of personal freedom. Nader el-Sarafy, one of the co-founders of Coptic 38, said in press statements that joining a party is a political matter and not related to religious belief.

Assaad added, “When the Nour Party ran in the 2012 parliamentary elections, it did not put a single Coptic person on its list and replaced the pictures of its female candidates with pictures of roses without names under them. … So the party discriminates among citizens on the basis of religion and gender.”

Assaad pointed out, “The main reference for the Nour Party is the Salafist committee in Alexandria,” and “The party has issued many strange religious fatwas, such as deeming saluting the flag to be apostasy and that the Christians are infidels, which basically means that a Muslim driver may drive a citizen to a bar but may not drive a priest to a church. It also issued a fatwa that it is not permissible for a Copt to be elected as a member of parliament or to assume leadership positions in the state such as a governor, minister or president. When the constitution of 2014 was approved, 24 seats were set aside for Copts and Nour said that this constitutional article was forced upon them. So Borhamy, spiritual father of the Nour Party, issued a religious fatwa declaring that "necessity knows no law" and approved the inclusion of Copts because he couldn't have had [valid] lists without Copts, and thus would be unable to compete in the elections.”

Assaad believes that there are two kinds of Copts who join the Nour Party: political opportunists who want to become deputies, and members of the Coptic 38 group. These Copts have problems getting permission for a second marriage from the church. So they settle their accounts with the church through trying to weaken its position by joining the Nour Party.

Assaad opposes church intervention in the political process, saying, “[The church] has no right to say to Coptic citizens that they may not join this or that party. The intervention of the church in politics since the era of Pope Shenouda, the 117th pope of the Coptic Orthodox Church, has gained Copts the enmity of Islamic movements and created a climate of sectarianism that the Copts are still feeling now. Pope Tawadros II of Alexandria has increased this enmity with the Islamic currents by appearing during the statement of July 3, 2013 [the day President Mohammed Morsi was isolated]. Also, at a time when the church is barring Copts from joining certain electoral lists, it cannot back up other lists in any way because it is against the constitution.”

Naguib Gabriel, a Coptic lawyer and head of the Egyptian Union for Human Rights, told Al-Monitor that the Copts who joined the Nour Party have sold their consciences, their religion and their homeland because the party's principles are no different from those of the Islamic State, which slaughtered Copts in Libya.

He added that the Nour Party "opposes the building of churches," wants to make Copts pay a yearly tax imposed on non-Muslims and does not consider them equal citizens. "How can a Copt join a party that despises their religion?” Gabriel pointed out. “The [news about the] pope barring Copts from running on Nour Party lists is untrue, since the church does not interfere in political life. … The church only offers guidance to its flock, who have freedom of choice after that.”

Salah Abdel-Maboud, a member of the Nour Party’s high commission, told Al-Monitor, “The presence of Copts in the Nour Party is natural because we are a political party for all Egyptians and not for a particular faction. … We were the first political party that completed its lists and submitted them to the High Elections Committee. This shows that we are a [diverse] party that includes Copts, women, young people, workers and peasants. We give special attention to people with special needs and we nominate them on our lists. The enthusiasm all sectors of society showed for us at a time when many parties have failed to form their lists shows that we are a party that does not exclude anyone. The Nour Party is being subjected to an unjustified smear campaign. Some say our party has a religious basis, but we are a party whose reference is religious in accordance with Article II of the constitution, which states that Islamic Sharia is the reference of the Egyptian state.”

Regarding their previous ban on Copts joining the Nour Party, Abdel-Maboud said the party "does not bar nor encourage anyone, but only adheres to the law and the constitution.”