Why some in Egypt are banning campaign photos of female candidates

The Nour Party is being criticized for banning campaign photos of female Coptic candidates running on its parliamentary electoral lists. 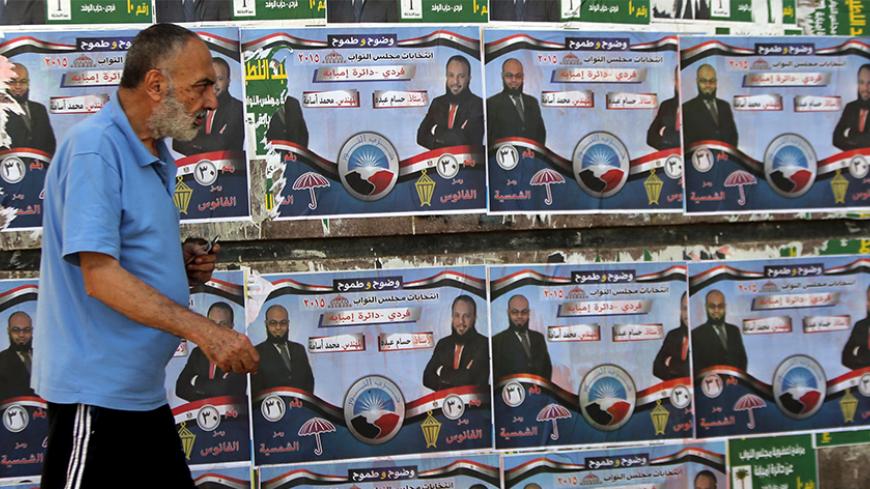 A man walks past election posters for parliamentary candidates of the Nour Party, Hossam Abdo and Mohammed Osama, in the Imbaba district of Giza, Egypt, Oct. 13, 2015. - REUTERS/Mohamed Abd El Ghany

The party had earlier faced opposition from its own members for allowing Copts on its lists in the first place, a decision that appeared to violate the spirit of fatwas issued by affiliated leaders. One fatwa issued after the January 25 Revolution by the Salafist Call, for which Al-Nour is considered the political arm, forbids even extending best wishes to Copts on their holidays. Another fatwa, issued before the 2012 elections by Yasser al-Borhami, deputy head of the Salafist Call, declares that Copts should not be allowed on any parliamentary ballots. Borhami stressed, “Christians should not run for parliamentary elections, as parliament is the legislative and regulatory authority. Should Christians be part of it, they could oust the president and hold the government accountable [for its actions], matters that infidels [Christians] are not permitted to handle."

Nevertheless, Article 5 of the law on the House of Representatives stipulates that each political party must include at least seven female candidates and three Coptic nominees on its 15-seat electoral list, and for their 45-seat list include at least 9 Copts and 21 females.

The Nour list Copts have been fiercely attacked by liberals and other Copts for joining forces with the Nour Party. During an Oct. 4 telephone interview with the reporter Lamis al-Hadidi for the television program “Hona al-Asema,” Pope Tawadros II said, “One cannot espouse two ideologies, and those who do are not honest with themselves. The Coptic candidates on the lists of religious parties lack credibility and are honest neither to Muslims nor to Christians.”

The Nour denounced Tawadros' remarks. Ashraf Thabet, deputy head of the Nour, said Oct. 7, “Pope Tawadros II did not have to attack the Nour Party. It is a non-peaceful step and should have not been taken by the pope of the church. He expressed a political opinion, and his attack against us in inappropriate.”

The No to Religious Parties campaign launched in August by liberal and opposition public figures seized the Nour’s photo ban to criticize the party. The campaign also accused the female Coptic candidates who went along with the decision of betraying the nation and the rights of women.

Speaking to Al-Monitor, Nader al-Sairafi, a Coptic candidate on the Nour list, denied that the Coptic female candidates had objected to the party’s decision not to display their photos on banners. “The candidates do not believe this issue is a big deal, as what matters are their electoral rounds in constituencies,” he reiterated.

Suzan Samir, one of the Coptic women on the Nour list, told Al-Monitor she did not mind the party’s decision, because she is already well known and what matters to her is her electoral program. She said that she has felt welcomed among voters while campaigning and that she did not speak to Nour leaders about the photo ban, because it was the least of her concerns.

Samir shared that she had joined the liberal Wafd Party but decided to run on the Nour list because she wanted to deliver to party members Christ's biblical message about loving one’s enemies. To Samir, her joining the Nour list sends a message to both Copts and Salafists to follow Christ’s teachings to love and accept others.

Samir, who is running in Greater Cairo, said that she has faced some difficulty financing her campaign but insists on competing to achieve her mission and live up to the Bible’s teachings. She asserted, “The Nour Party leaders and members are thrilled about my nomination as a Coptic woman on their list, as this is a whole new different experience for them.”

Commenting on the Nour’s decision to ban the photos of its female Coptic candidates, Dalia Ziada, founder of No to Religious Parties, said, “This was to be expected and reveals the true, ugly face of the Nour Party, which despises women and Copts and does not accept others. The party’s leaders have been claiming that the list's female candidates did not want their photos to be displaced on election banners, but what about the photos of the Coptic candidates?” she told Al-Monitor.

Ziada chastised the female Coptic candidates on the Nour list for standing against the rights of women by running on the lists of a party that does not recognize the rights of either women or Copts. “The photo of a candidate is the first step for voters to get to know who will be representing them in the parliament. How will they vote for candidates without knowing what they look like?” she asked.