A dispute with the Coptic Church over personal status laws and a new electoral law have led some Christians toward running on the Salafist Nour Party list. 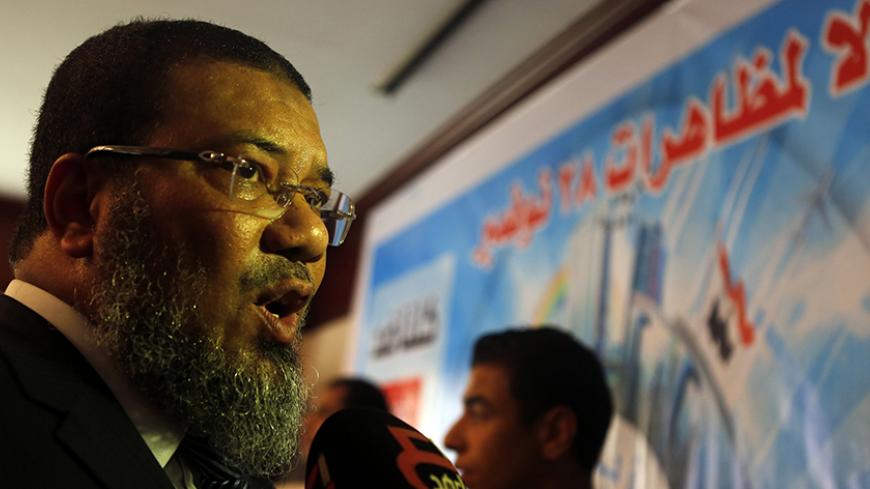 Ashraf Thabet, vice president of the Salafist Nour Party speaks to media after a news conference against the upcoming Nov. 28 demonstrations, called for by the "Salafist Front," in Cairo, Nov. 26, 2014. - REUTERS/Amr Abdallah Dalsh

The Salafist Call, also known as the al-Daawa Movement, continues to forbid Muslims to celebrate Christmas with Christians in Egypt on either Dec. 25 or Jan. 6, describing such as a glorification of the infidels’ religion. The movement also forbade Muslims from co-celebrating Easter in 2014. Meanwhile, however, a number of leaders of the Nour Party — the political arm of the Salafist Call — said in December that the issue of a quota for Copts on the party’s list for upcoming parliamentary elections had been resolved, with the party successfully adding a number of Christians to them.

The law governing the elections stipulates that Copts be represented by 24 candidates in the electoral lists of each party at the national level. They are guaranteed at least 24 seats in the next parliament. Copts can also, of course, run for parliamentary seats as individuals.

Al-Monitor has tried to identify the Copts who have chosen to run in the elections on the Nour ticket, despite the Salafist Call's position on holidays and some affiliated sheikhs describing Christians as infidels. Ashraf Tabet and Salah Abdul Maaboud, two leading figures in the Nour Party and members of its senior council, refused to reveal their names, explaining that its list is not final and subject to change if Nour allies with other parties.

The Nour Party is expected to enter into an alliance with some Christian movements that disagree with the Egyptian church over its refusal to amend personal status laws to liberalize Christian divorce. Most notable among such organizations is the Copts 38 Movement. Nour is the only party in Egypt seeking to apply Islamic law, under which Copts might be able to divorce more easily.

Mina Georges, coordinator of the Faith Protectors Association, confirmed to Al-Monitor that an alliance between the Nour Party and some Christian movements, as well as her group, had been discussed. Georges said, “Politically and legally, nothing can prevent any Christian from participating in Nour’s electoral list, and we do not object as long as participation is within the scope of politics and the law.”

Christians joining Nour’s electoral list are the focus of debate within Christian movements. Mina Asaad Kamel, spokesperson for the Faith Protectors Association, offered another perspective on Christians joining Nour's list, telling Al-Monitor, “The presence of Christians on the Nour Party list is just political posturing by both parties. Nour is obliged to include them according to the law and pretend that the Copts have rights. If tomorrow a new law frees the parties from the necessity of including the Copts, the party will force them out, or at least will not include them on its list to reach parliament."

Contrary to Serafy’s statement regarding a Nour alliance with some members of Copts 38 in Alexandria, Salah Abdul Maaboud, head of Nour's electoral commission, told Al-Monitor that the Copts included on the party’s list are not affiliated with that movement or the Faith Protectors.

Orthodox priest Abd al-Masih Basit told Al-Monitor that the church would not interfere in politics and would not take any actions against Christian parliamentary candidates on the Nour list, as some newspapers had reported it would. Yet, he added, “The Nour Party considers the Christians infidels, and therefore, any Christian who participates in the party is giving up his dignity. It is better for those who have a problem with the church regarding the personal status laws — and who view support for Nour as a solution to amending those laws through parliament — to abandon Christianity.”

Kamal Zakher, founder of the Coptic Secular Movement, told Al-Monitor that there is confusion in Egyptian society regarding whether the country is considered a religious state or a civil state. He explained, “Although the constitution recognizes Egypt as a civil state, it includes some provisions that may lay the foundations for a religious state, such as allowing only the monotheistic religions to build places of worship and to practice their religion, such as considering the sharia the main source of legislation and the other divine laws as a source of legislation for their own personal status laws.”

He further stated, “Although the constitution bans the establishment of political parties based on religion, it did not dissolve Nour, and everyone knows that it is a religious party. In light of this confusion, the interests of some groups, which are harmed by the phenomenon of the religious state, such as in the church developing the Copt’s personal status law, may converge with the interests of other religious forces, which seek to impose laws that are different from those of the church, such as the Salafist Call and Nour.”

The controversy aside, Serafy stated, “The main objective of the Copts’ quota is that they ally with Islamic parties, such as Nour, so that their authority is reconstituted. It is not designed to exclude those parties, as some believe. The state does not seek to exclude the Nour Party, and the proof is that it participated along with al-Azhar, the church and the armed forces in the road map.”

He also said, “The Nour Party played a prominent and key role in the success of the June 30 revolution. Without its participation in the road map, the political scene would have become more complicated at the time.”

On the Salafist Call’s attitude toward Christianity, Serafy said, “The disdain and deeming of Christians as infidels are the result of educational and cultural deterioration in all communities, not only in Nour and the Salafist Call. An Orthodox pastor was previously considered an infidel by Protestants and Catholics, although they are Christians just like him.”

Regarding the issue of Nour being a religious party, Serafy said, “The recent experiences of the Nour Party prove that it is not a religious party, and that it is foremost political. The proof is that the party takes into account the political harmonization within the Committee of 50 [which wrote the current constitution], and does not insist on committing to Article 219, in terms of interpretating the principles of Islamic law in Article 2 of the constitution [from a Salafist perspective].”

It would thus appear that the Coptic candidates who will join the Nour list in the upcoming elections will most likely be those who disagree with the church's position on personal status laws for Christians.