Inheritance plan could be game-changer for Egyptian women

A draft law before Egypt’s parliament could help solve the problem of women being deprived of their inheritance, at least in legal terms, but overcoming traditions and customs will not be easy. 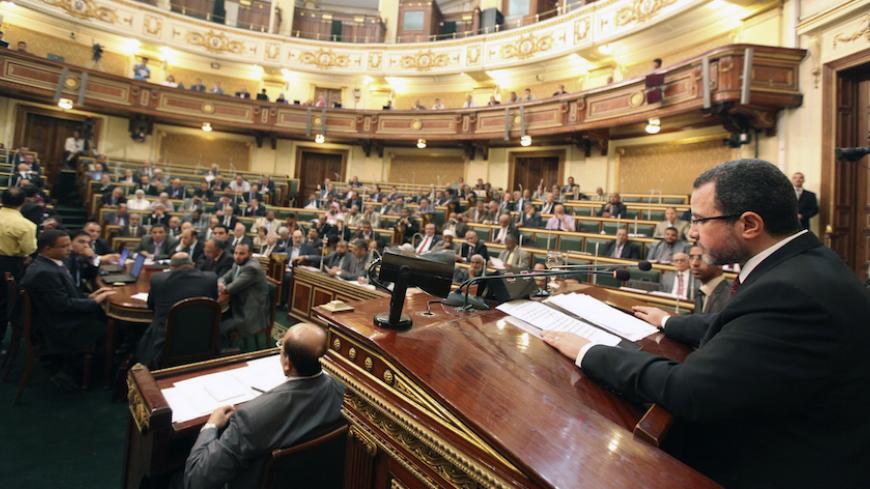 CAIRO — The Egyptian parliament is considering a move to ensure rightful heirs — including women — get their inheritances.

Six months after Egypt’s government amended the inheritance law to punish anyone who deliberately denies an inheritance to those entitled to it, parliament is discussing additional amendments. A draft law would create a judicial body specifically tasked with actually restituting inheritances to their rightful heirs.

A 2010 survey of 200 Egyptian women showed that 59% of them did not receive any inheritance, and women in Upper Egypt, in particular, do not dare to demand their rights in inheritance.

Ghada Sakr, secretary of the parliament’s Committee of Media, Culture and Antiquities, told Al-Monitor four parliamentary committees are discussing the text of the draft law she submitted in mid-June. She added, “I am working on a modern comparative study about inheritance problems in Egypt by studying the cases of a sample of women in Upper Egypt and Damietta.”

Sakr, elected from Damietta, noted that women in this province — according to the studied sample — do not dare to ask their brothers for part of the inheritance, which in many cases consists of factories and workshops that make sweets, for which Damietta is famous.

In the best-case scenario, Sakr said, the women obtain money instead.

“Social traditions and habits force women to accept any sum of money, even if not equivalent to the value of their share of the inheritance, for fear of being hated by their own family,” she said.

According to Ministry of Justice statistics, the courts hear about 144,000 inheritance-related cases annually. Additionally, 2,750 motions are filed by children to stop their deceased parents’ assets from being distributed.

In Upper Egypt, customs and traditions prevent families from assigning agricultural lands to women by way of inheritance so that the ownership of family lands isn’t transferred to another family when these women marry.

Reza Ahmed from Sohag province told Al-Monitor, “My husband died, leaving me and my four children a small piece of land, and we have no other source of income. After his death, and 20 years after their father’s estate was distributed, my sisters-in-law are now demanding their rightful share in this land, although they obtained from my husband financial compensation in return for forfeiting their share in this land upon the distribution of the inheritance.”

She added, “My children were raised on the idea that land represents one’s honor, which makes things worse and foretells bloody battles between them and their cousins.”

Sakr confirmed that the draft law addresses the problems that emerged in the current Egyptian inheritance law and pointed out that it would protect the family in case of polygamy and ensure the rights of the first wife and her children.

“The law guarantees care for a child born as a result of customary marriage, through an authority established for this purpose. The law also requires the husband who concludes a customary marriage to pay child alimony. An article was added for cases of deprivation of inheritance in case of denial of parentage or denial of marriage.”

Zainab Kheir, director of the Egyptian Center for Economic and Social Rights, told Al-Monitor the proposal is long overdue. However, she fears it may be hindered by beliefs and social traditions. To make the amendments work will require a change of the culture of discrimination against women, which can only be achieved through collective work.

Although clerics in Egypt praised the inheritance draft law, a controversy emerged over the issue of inheritance in cases when parentage is denied.

“It is a violation of the law to give an inheritance to a person whose parentage is denied,” Ahmad Karimeh, a professor of Islamic jurisprudence at Al-Azhar University, told Al-Monitor.

Karimeh said Sharia law linked parentage to marriage, and he quoted the Prophet Muhammad as saying, "Paternity of the child goes to the [marital] bed.”

He continued, “Modern laboratory tests and tools are presumptions and not evidence. Tests are laboratory analyses that may be right and wrong. When a child is born out of wedlock, his or her parentage is not proven and he or she has no rights.

He added, “We do not want to be surprised in the near future to see national identification cards and passports including illegitimate children. Muslims, Christians and Jews in the Eastern [societies] refuse this because this is refused by all religions.”

On the other hand, the head of Al-Azhar University’s Fatwa Committee, Abdul Hamid al-Atrash, told Al-Monitor that he supports the idea that the law entitles any person who proves his parentage in any way to obtain an inheritance.

He noted that Muhammad’s saying that "paternity of the child goes to the [marital] bed” confirms that when a woman is married and gets pregnant from a man other than her husband, the child must be affiliated to the husband.

Atrash added, “The Quranic verses indicated the shares of inheritance that parents and kinsmen can leave to the heirs. The bad habits of society prevent women from their entitled inheritance.”

He pointed to another phenomenon that has spread, whereby parents deprive some of their children of their inheritance as a punishment, which is forbidden in Islam.