Five years on, why do Egyptian authorities still fear January 25?

Ahead of the fifth anniversary of the January 25 Revolution, Egyptian authorities have taken tight security measures to deter any protests. 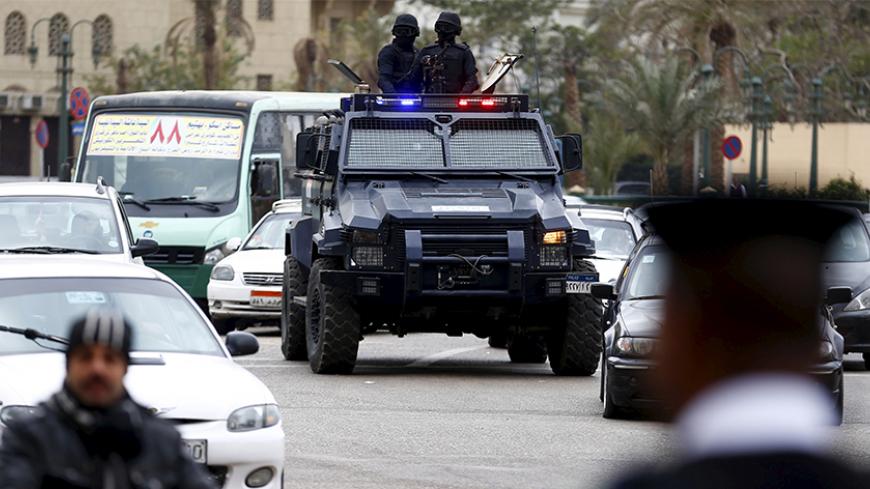 Members of security forces keep watch in Tahrir Square during the fifth anniversary of the uprising that ended the 30-year reign of President Hosni Mubarak, Cairo, Jan. 25, 2016. - REUTERS/Amr Abdallah Dalsh

CAIRO — Five years after the outbreak of the January 25 Revolution in 2011, Egyptians are still dreaming of achieving the demands they raised during their revolution: bread, freedom and social justice. The successive governments and the current political administration have introduced major development projects aimed at gaining the trust of the people, yet the rates of poverty, unemployment, administrative corruption and the violation of freedoms continue to soar.

Al-Monitor spoke with three young activists who participated in the January 25 Revolution and its subsequent events. Each had his own story about emigration, imprisonment or loss of interest in public life. All three confirmed that the overall situation has become frustrating for the majority of those who took part in the revolution, as the country devolved into cycles of political conflicts that hindered the achievement of the revolution’s objectives.

In a message to Al-Monitor sent through his brother, Dia Abdul Rahman, a 29-year-old activist who has been detained for 2½ years without trial for allegedly using violence against police during the break-up of the Rabia al-Adawiya protests in August 2013, said, “Our only dream is to appear before the court, even if we have not committed any crime, instead of being left in prison without trial.” He added, “We are of no value to the authorities. They do not even know if we are criminals or victims.”

Sameh al-Gabali, 31, a physician who served in field hospitals during the revolution, told Al-Monitor, “I emigrated to one of the African states seeking a job, as I became certain that nothing will ever change in Egypt. I was no longer able to bear the memory of the victims that were seriously injured or died in the field hospital, since I now realize that all this was in vain.”

Samir Hosni, a 27-year-old architect, said, “The last five years have unveiled all of the conflicts crippling this society and its political spectrum. I get entertained while watching from afar the performance of those who are leading the scene. Our role has yet to come.”

Despite announcements of ambitious government plans and programs to improve Egyptian citizens' living standards, significant failures still hamper economic reform, social justice and youth employment. The inflation rate rose to 11%, according to the Central Bank, while unemployment has risen dramatically, especially with the damage suffered by the tourism sector.

According to the Arab Union for Economic Crimes and Money Laundering, the cost of corruption in 2015 exceeded 600 billion Egypatian pounds (around $77 billion). Moreover, as a result of Egypt’s expanded borrowing policies, domestic public debt rose to 900 billion pounds (around $ 114 billion), while external debt stood at $32 billion in 2015.

Yet, from 2013 to 2015, some positive indicators emerged as the Egyptian street witnessed a return of security, following successive bombings and a series of terror activities in a number of Egyptian governorates. However, this improvement came at the cost of freedoms and human rights.

Human rights organizations reported an increase in so-called forced disappearances through 2015, as well as a rise in cases of torture, medical neglect and ill-treatment in detention centers. Journalists also complained of a severe clamp-down as reporters were incarcerated and investigated by the military prosecutor.

Khaled Abdel-Hamid, a political activist and founder of the Freedom for the Brave campaign, told Al-Monitor, “We are facing all kinds of violations of freedoms in an unprecedented manner that was not witnessed even during [former President Hosni] Mubarak's rule. The matter is no longer limited to arrests or forced disappearances. There are even direct killings without any trials.”

He added, “We do not expect the slogans of the revolution to be achieved so easily. We are facing a long and complex process of change, but I have no doubt that what is happening now is a defeat of the revolution. … I do not think that the fifth anniversary of the revolution will witness any major breakthrough or that the events of January 2011 will be repeated, unless the revolutionary forces agree to leave their differences behind and bring the revolution back to its right track.”

As Egyptians celebrate the 5th anniversary of the revolution, a tense calm still prevails over the political scene in Egypt. Observers have ruled out the possibility of any popular mobilization. The government and security agencies acted proactively to fears that protests may bring more violence and security chaos. Military and police security forces were deployed to secure vital facilities in Cairo and other governorates. Tanks carrying banners reading "citizens’ protection forces" were stationed in the main streets and squares, especially Tahrir Square. The Ministry of Defense issued a statement on Jan. 22 asserting that these forces were deployed to deter any person who would dare to compromise the country’s security.

Since the beginning of January and ahead of the fifth anniversary of the revolution, Egyptian authorities have raided and searched numerous apartments and residential units in downtown Cairo around Tahrir Square.

Authorities also raided cultural centers, including the Merritt Publishing House prior to a book-signing ceremony for a book on corruption on Dec. 28. The next day, security forces stormed Rawabet Theater and the Townhouse Gallery exhibiting youth art performances and some cafes frequented by political activist groups.

Security services have sought to criminalize participation in the January 25 Revolution. Taher Mukhtar, a member of the Freedoms Committee at the Doctors Syndicate, was arrested on Jan. 14 on charges of participating in the revolution, according to the prosecution's report.

Groups of political activists condemned his arrest, organized a petition and took to social media to express solidarity using the hashtag “#I participated in the January revolution.” They demanded the immediate release of young activists and respect for the right to peaceful protest guaranteed by the constitution.

In another development, a group of young people calling itself "Revolutionary Punishment" issued a statement Jan. 22 claiming responsibility for the bombing of an apartment in the Haram district in Giza governorate on Jan. 21 that killed nine people, including six police officers. This statement differed from others issued by entities affiliated with the Islamic State claiming responsibility for the attack, since the group expressed its adherence to the principles of the revolution and asserted that this operation is a new stage of revolutionary resistance and was carried out in retaliation for the victims of the revolution.

Egypt remains deeply affected by the revolutionary movement that was first sparked in January 2011 and brought down the Mubarak regime. The Egyptian street seems calm, but there is a deep concern for political and economic failures that could bring the crowds back to the squares.