Egypt has little to celebrate on January 25

Three years after the uprising that toppled Egyptian President Hosni Mubarak, Egypt is more polarized than ever. 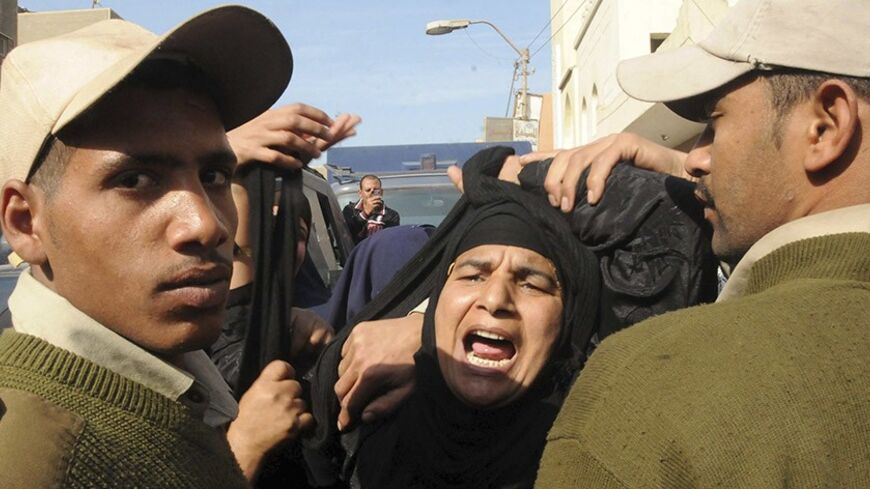 A woman mourns during the funeral of five Egyptian policemen who were killed when masked gunmen on motorbikes opened fire on a checkpoint, Beni Suef, Jan. 23, 2014. - REUTERS/Al Youm Al Saabi Newspaper

CAIRO — As Egypt's interim president and ministers of defense and interior celebrated the third anniversary of the January 25 Revolution, countless authors and TV show hosts continued to smear the uprising that toppled Hosni Mubarak's dictatorship. On this day in 2011, Egyptians took to the streets and called for an end to decades of torture, killings and injustice, but now these authors and TV hosts accuse the revolution's youthful participants of disloyalty, espionage and call for crushing those who dare criticize the police.

A couple of hours after the celebration aired on national TV — as I was in a taxi heading to Cairo's Zamalek neighborhood — a radio news program received a call from a top official of the Beni Suef governorate, commenting on a militant attack at a checkpoint on Jan. 23 that killed five police officers.

"This terrorist attack is an attempt against the harmony and unity shown through the constitutional referendum, but it will only make us more persistent in our fight against terrorism," said the official. His comment was followed by random calls from listeners pledging to join the Jan. 25 celebrations in Tahrir Square and in every major square across the country. They called for celebrations in all Egypt's squares — the squares that are remembered for being the sites of bloody confrontations over three years of unrest.

"Celebrating a constitution that never satisfied the wishes of the dead youth and was boycotted by those who are still alive," said the cab driver. "What a pity!"

I looked at the driver, a grim man likely in his late 50s, and said, "If the radio audience heard us say that, we would be accused of disloyalty and supporting a terrorist organization."

"That’s why I keep my mouth shut. I wouldn't have hissed if I hadn't seen that smirk on your face," said the driver without looking at me.

I don't know if the driver took me for a Muslim Brotherhood member because of the smirk, but it didn’t really matter. Members of the April 6 Movement, secular activists, high school students and even foreign correspondents are in Egyptian jails along with hundreds of Muslim Brotherhood officers and members.

The conflict between the government official's comment on "harmony and unity" and the taxi driver's confession to keeping his "mouth shut," summed up the collective analysis of three Egyptians that I interviewed over the past three years. I saw Egypt's developments through their experiences, along with dozens of other activists and apolitical people.

The first was Mai Raafat, a woman in her early 30s who organized a campaign for securing medical treatment for the victims of the January 25 Revolution. Rafaat connected me with several victims, one of whom I featured in an article I wrote on the first anniversary of the revolution.

Back then, Rafaat's campaign assisted dozens who were injured during the violent confrontations of January 2011, and provided aid for the families of dead protesters. Some of the volunteers running the campaign alongside Rafaat were themselves injured victims of the revolution.

Speaking to Rafaat by phone on Jan. 22, she wasn’t the enthusiastic and optimistic person I met in 2012. Instead, she was pessimistic and resentful as the revolution's anniversary approached.

"Some of the victims continue to receive aid from nongovernmental organizations. Some lost hope in finding a job due to their disabilities and others prefer to live on minimal aid than take the few jobs offered by the government or outsourced by the organizations," said Rafaat.

"We tried to resurrect the campaign in recent months but were shocked to see people refusing to donate blood because the victim we were trying to help was injured in the dispersal of the pro-[Mohammed] Morsi sit-in last August," she said.

Rafaat's words reminded me of Gaber Sayyed, a January 2011 victim whose surgery was canceled because pro-Mubarak nurses refused to treat him.

"They were humiliating me for being an [anti-Mubarak] protester," he told me in a January 2012 interview at his house, where he was bedridden in a thigh-high cast autographed by his friends. One note read: "The police are thugs."

As for Rafaat, she was in a position similar to  the taxi driver's: "Isolated, because if I defend an injured member of the Muslim Brotherhood, or am sympathetic to them, I would be accused of disloyalty and being a member of [a] terrorist organization."

The second was Fouad Mokhtar, a private company employee who paid $600 to print a massive poster emblazoned with the names and photos of slain protesters. His poster was hung on the facade of a Tahrir Square building during the 18 days of the uprising, then pulled down and spread in the middle of the square before it disappeared.

Mokhtar, a 32-year-old who joined the protesters in Tahrir Square in January 2011, decided to boycott the constitutional referendum held less than two weeks ago. "I believe the referendum was a despicable show that I would have never taken part of," said Mokhtar.

He recalled a story of a non-voter who was attacked by several supporters of the constitution in front of a polling station in Cairo's southern district of Maadi.

"He was physically attacked by other citizens as the military and police personnel securing the polling station watched, just because he revealed his intention to vote against the constitution because it allowed military trials of civilians," said Mokhtar. He said that Jan. 25, 2014 "will be a continuation, not a celebration."

"This is a continuation of January 2011, not an anniversary," he stressed.

The last of the three people I interviewed — who were all fierce critics of Mubarak, Morsi and the current interim, military-backed regime — is a Bedouin tribesman and Sinai activist who refused to have his name mentioned.

The revered tribesman, who took part in organizing the anti-Mubarak protests in North Sinai during the 18 days of protests, fled North Sinai after his house was shelled in the wide-scale military operation that kicked off in the aftermath of Morsi's ouster on July 3, 2013.

This man who I met with countless times, spending several nights at his house in a remote North Sinai village — before it was destroyed along with dozens of Bedouin homes in September 2013 — spoke with me via the Internet and refused to reveal his location.

"There is no place for moderate speakers now. The stage is reserved for fanatics and propagandists of the military and the Muslim Brotherhood. The remnants of Mubarak's regime are waging war on any form of change since 2011."

He said, "Every drop of blood worsens the situation and further divides the country. Neither the constitution nor the anniversary and celebrations will absorb the anger of anyone who suffered injustice and remains without compensation, if not further violated."

The last time we spoke was a few days after his house was destroyed last September. Back then, he told me that his house "is not the main issue. I could rebuild the house again, but what seems impossible is refilling the widening gaps between different sectors of the Egyptian people, and other gaps between the people and the state."

Two days ago, he said he is "afraid Egypt is pacing toward another phase of civil strife, not nationwide celebrations."