Five years after the January 25 Revolution, members of the new parliament question whether the uprising was really a revolution. Meanwhile, the government is cracking down on activists to avoid imminent protests. 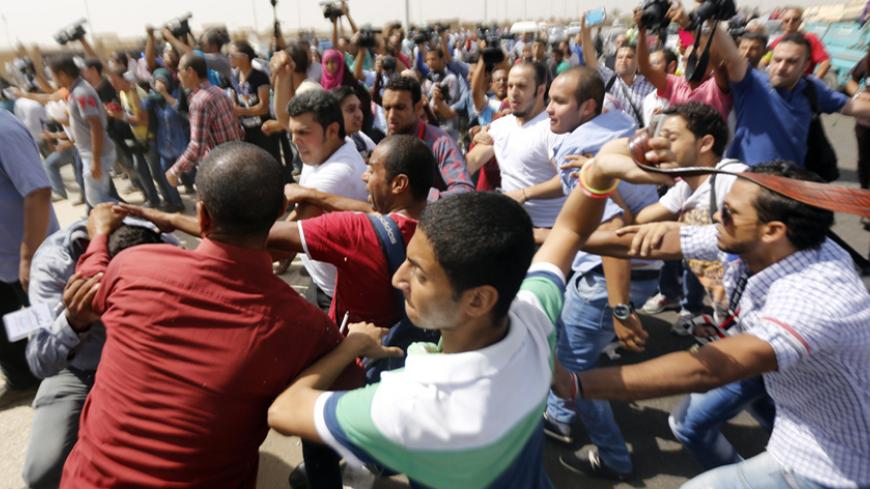 People whose relatives were killed during the 2011 Egyptian revolution clash with supporters of former Egyptian President Hosni Mubarak outside the police academy on the outskirts of Cairo, Sept. 27, 2014. - REUTERS/Amr Abdallah Dalsh

Millions of Egyptians huddled around their TV sets on Jan. 10 to watch the country’s new parliament convene. The Egyptian media called it a “historic moment.” Not only had the country been without a parliament for nearly four years (since the dissolution of the Islamist-majority parliament by a Supreme Court ruling in 2012), but the chamber’s inaugural session also marked the completion of the political road map unveiled by then-Defense Minister Abdel Fattah al-Sisi in July 2013.

Despite the voter apathy that marred the recent legislative elections, many Egyptians are pinning their hopes on the new parliament to pave the way for a more stable, secure and just society.

What should have been a moment of pride for Egyptians turned into disappointment: Parliament’s opening session plunged into chaos after controversial member of parliament Mortada Mansour refused to take the constitutional oath, voicing his objection to the wording, which alluded to the overthrow of former President Hosni Mubarak. Mansour’s hostile stance toward the 2011 revolution that led to the toppling of the longtime authoritarian president is no secret. He had on several occasions voiced his opposition to the 2011 movement for change, saying that it had been “hijacked by the Muslim Brotherhood” and that “the real revolution was the one that took place on June 30,” which is a reference to the mass protests that helped topple the democratically elected President Mohammed Morsi. Still, many were caught off-guard by the lawmaker’s reluctance to recite the constitutional oath. Surprise quickly gave way to dismay, prompting scores of activists to turn to social media networks to express their concern.

Appearing as a guest on a talk show on the Egyptian privately owned Ten TV, human rights defender Malek Adly criticized Mansour’s behavior, reminding him that the constitution recognizes the January 25 Revolution and ought to be respected.

“Members of parliament who don’t respect the constitution should quit parliament,” Adly said, adding that the 2011 revolution is not a foreign conspiracy as some lawmakers claim it is.

In the runup to the anniversary of the Jan. 25 uprising, attacks by regime loyalists on the 2011 movement for change have intensified amid government fears of fresh protests (called for by some activists) breaking out.

Much of the revolution’s vilification has come from elected deputies in a parliament dominated by supporters of Sisi, who is now president, and former members of Mubarak’s National Democratic Party. Journalist and writer Lamis Gaber, one of 28 legislators appointed to the new parliament by Sisi, has also voiced her opposition to the Jan. 25 uprising. In a TV interview on the privately owned Sada El Balad, she said, “Jan. 25 should only be celebrated as National Police Day in a tribute to members of the security forces who lost their lives fighting terrorism.”

The Ministry of Religious Endowments, which issues directives to preachers on the topics for their weekly Friday sermons, has also joined the anti-revolution campaign. In recent weeks, preachers at state-affiliated mosques have repeatedly warned that “protests are sinful as they disrupt stability.”

Meanwhile, in the weeks leading up to the fifth anniversary of the revolution, the security crackdown on dissent has also gained steam, with police arresting and detaining several activists suspected of calling for protests. On Jan. 2, three Facebook administrators were arrested on charges of using social media to incite against the state. They were also charged with membership in the outlawed Muslim Brotherhood. In a recent security sweep, police raided several apartments in the downtown Cairo area close to Tahrir Square and closed the Townhouse Gallery and its affiliated Rawabet Theater, major contemporary art and culture spaces frequented by young activists.

Mohamed Salem, an activist and member of the secular Social Democratic Party, told Al-Monitor that he and many of his friends have steered clear of downtown street cafes, which are regular meeting points for the activists, to avoid arrest.

“There’s mass hysteria,” he said, adding that the police are rounding up scores of young people ahead of the anniversary of the uprising because of “unfounded fears of renewed unrest.”

Leftists appear to have become the new targets of an expanding security crackdown on dissent that has already seen thousands of government opponents imprisoned since the ouster of Morsi. In the latest arrest spree, on Jan. 14, security forces stormed the home of Taher Mokhtar, a leftist doctor and member of the Doctors Syndicate, in a pre-dawn raid, arresting him and two of his friends. Mokhtar has since been detained on the charge of possessing documents inciting against the regime. A member of the Freedom Committee at the syndicate, Mokhtar has been campaigning for the rights of detainees to medical treatment. Mokhtar was interrogated for several hours by national security prosecutors before being detained.

During the interrogation, the prosecutors asked Mokhtar whether he had taken part in the January 2011 uprising. He replied that he had, adding that it was not a crime. The question sparked outrage among activists who responded with an online petition demanding his release.

“The regime has turned participation in the revolution into an official charge,” reads the petition posted on a Facebook page created by a group expressing solidarity with Mokhtar.

“We are all guilty of taking part in the revolution, and we shall never deny it,” the petitioners challenged.

The activists also started an Arabic hashtag that translates into #I-participated-in-January-Revolution, which quickly went viral on social media. They used the hashtag to boast about their experiences during the 18 days of the uprising.

Five years after an uprising that melted all barriers — social, economic, religious and political — the revolution’s demonization by regime loyalists reflects the polarization in the society, with powerful counter-revolutionary forces at one end and a smaller group of die-hard — and now increasingly marginalized — young revolutionary activists who vow to continue their struggle to attain the goals of the revolution. In between the two camps are the weary majority yearning for security and stability and prioritizing both over democratic values and human rights.

“If I see a demonstrator on the street on Jan. 25, I will physically attack him myself,” Mohamed Gomaa, a taxi driver, said.

“Enough chaos,” he added, “We want to feed our children.”

His words echo the sentiments of the majority of Egyptians whose livelihoods have been affected by years of economic stagnation and political turmoil.

Tackling the more pressing challenges of a faltering economy and the looming threat of Islamist militancy have become the priority for most Egyptians. They support the government in its efforts to resuscitate the economy and counter the ongoing Islamist insurgency in North Sinai, where hundreds of police and military have been killed in the last three years. The unmet expectations of Egyptians, however, have affected Sisi’s popularity. While he still enjoys massive support, Sisi is no longer perceived as “the revered savior” as was the case in the early days of his presidency. Five years after a revolution that called for “bread and social justice,” his ability to deliver on his promises of economic revival, stability and security are now the true tests of his presidency.