People are questioning the timing of Egyptian President Abdel Fattah al-Sisi’s appointment of a close associate as acting intelligence director ahead of the presidential election. 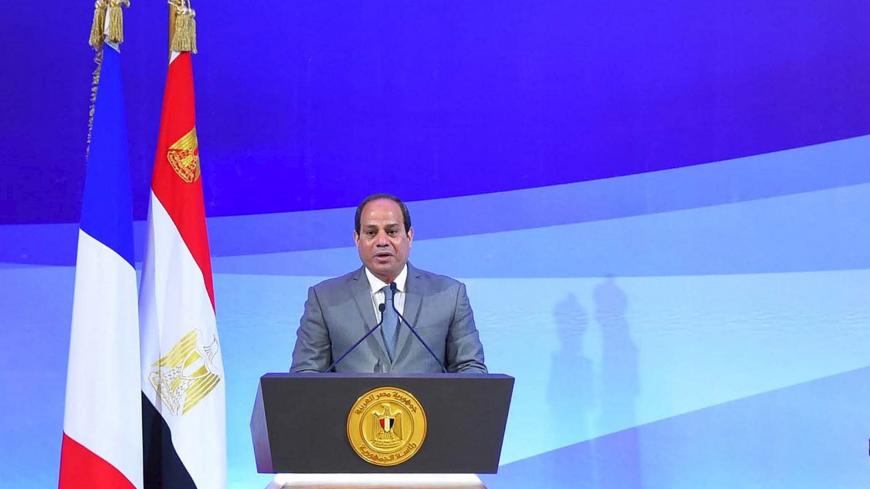 CAIRO — Despite having no real challengers, Egyptian President Abdel Fattah al-Sisi is shoring up his support in the March election, surrounding himself with his closest, most loyal advisers — the ones he hasn't fired, that is.

Sisi fired Khaled Fawzy as director of the General Intelligence Directorate (GID) on Jan. 19, replacing him with Maj. Gen. Abbas Kamel — Sisi's chief of staff — as acting director. Sisi had appointed Fawzy as GID director in December 2014. No reason was given for Fawzy's dismissal, though there has been plenty of speculation.

Former Chief of Staff Sami Anan’s bid for the presidency sparked controversy — even more so when his campaign was cut short after the army arrested him Jan. 23 for alleged fraud and attempts to stir a dispute between the people and the army.

It proved difficult to obtain an official statement about the circumstances surrounding the appointment of Kamel, who is Sisi’s closest and most reliable ally at this time. Kamel was his assistant when Sisi was director of military intelligence from 2010 to 2012. Kamel has accompanied Sisi on many official occasions inside and outside Egypt.

Most sources in the government, parliament and official institutions who spoke with Al-Monitor said Sisi chose to rearrange the security apparatus before the presidential election to ensure loyalty and full coordination among intelligence and national security institutions. Kamel’s appointment as acting GID director comes in the wake of Sisi’s decision in October to name Mohamed Farid Hegazy chief of staff of the armed forces, replacing Mahmoud Hegazy, who was appointed presidential adviser for strategic planning and crisis management.

As for Fawzy's dismissal, "The decision … is not only about him, but is also related to issues that affect several leaders in general intelligence," an official close to the GID told Al-Monitor. “The president has concerns due to information he received from security sources about arrangements Anan made with intelligence [officials] after announcing his candidacy.”

It appears the Sisi administration thought Fawzy and other fired GID leaders were involved in the unspecified "arrangements."

The same official said on condition of anonymity, “Appointing Kamel — Sisi’s office director and the closest person to the president since [Sisi] was chief of military intelligence, then the minister of defense — proves that Sisi doesn't trust any general intelligence leaders currently. Kamel’s main duty during this stage will be to ensure the loyalty of the general intelligence to Sisi.”

Sisi also made some changes in the directorate, sending 17 intelligence undersecretaries into retirement in July 2016 and 19 others in January 2017.

Khaled Okasha, the director of the Egypt-based National Center for Security Studies, told Al-Monitor, “Appointing Kamel as acting director of intelligence is a normal step. The president has the right to reshuffle the intelligence directorate, and this has nothing to do with the timing of the presidential elections.”

Okasha added, “Kamel does not have specific tasks during his term as acting director, but the GID will continue working on the cases delegated to it, most of which are related to the country’s national security. Internal affairs are not included, as those are the responsibility of the national security apparatus affiliated with the Ministry of Interior.”

Hassan Nafaa, a political science professor at the University of Cairo, told Al-Monitor, “Before the presidential candidacy doors were shut, the regime seemed afraid of any candidate who might seriously enter the presidential race. Therefore, the regime had to rearrange the security institutions to guarantee their loyalty until the end of the elections.”

He added, “Given the lack of transparency in announcing the real reasons that called for changing the GID director at this time, choosing Kamel indicates that the president’s circle of trust is narrowing down." He also said the security apparatus has interfered at times with political, economic and media affairs, "fueling conflict between institutions.”

Sisi was firm in his threats during the Jan. 31 opening of the Zohr gas field in western Port Said when he said, “I am not a politician. Whoever wants to bring chaos to Egypt has to get rid of me first. If any evil force thinks of messing with Egypt’s security, I will ask for a second authorization from the Egyptians. … I will take other measures.” Sisi’s remarks came after he reportedly received information about certain parties working to destabilize the state.

Hashem Qassem, publisher and founder of Al-Masry Al-Youm news site, told Al-Monitor, “Sisi is escalating his tone and seems fiercer in dealing with internal political affairs. Diplomacy has gone out the window, but at the same time, Egyptians are shocked at the constraints on candidates who were willing to compete against Sisi in the elections.”

A precarious state of calm prevails in Egypt's political arena now that no real candidates are left to face Sisi in the coming elections. Anan was arrested and investigated, and human rights lawyer Khaled Ali withdrew for reasons his campaign described vaguely as violations in the electoral process.

Observers expect the elections to proceed calmly, as El Ghad Party leader and Sisi supporter Moussa Mustafa Moussa submitted his candidacy in the last hours before the deadline Jan. 29. Moussa has been accused of only running to provide the perception of competitive elections.

Calls for boycotting the elections are faint, but Sisi still has to ensure the loyalty of the major security institutions, which will be handling the most important and delicate issues during his second term, including the battle against terrorism, dealing with opponents and national security.