Will removal of Egypt's spy chief leave Palestinians in a bind?

Some Palestinians are concerned that the dismissal of the head of the Egyptian intelligence will affect Egypt's ability to mediate their ongoing reconciliation process. 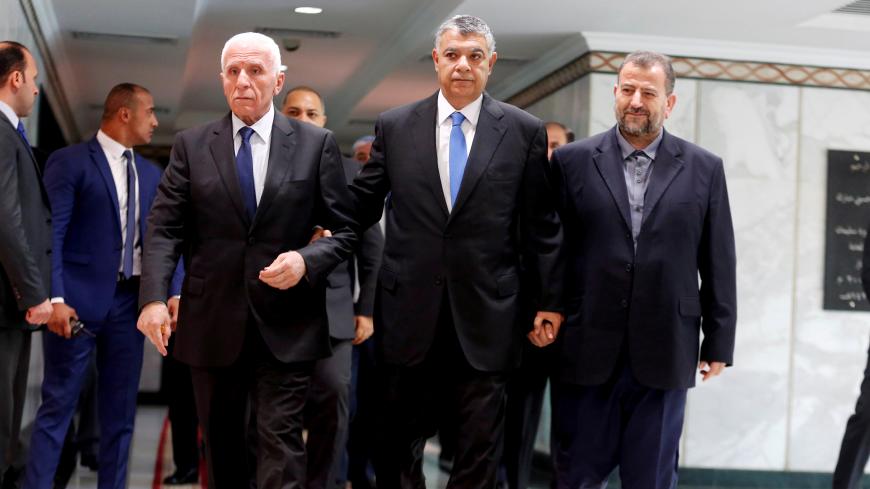 Palestinians are still wondering what effect last month's dismissal of the Egyptian intelligence chief will have on them.

Lebanon's Al-Akhbar newspaper reported Jan. 17 that Egyptian President Abdel Fattah al-Sisi had dismissed the director of the General Intelligence Directorate, Khaled Fawzy, with no explanation and tasked Chief of Staff Maj. Gen. Abbas Kamel to run the directorate until a new director is appointed.

The Egyptian media did not run the news of Fawzy’s dismissal, reporting only Sisi’s decision to appoint Kamel as acting director. But Egyptian parliamentarian Mustafa Bakri, who is close to Sisi, tweeted Jan. 19 that Fawzy was dismissed because his health is deteriorating from an unnamed disease.

As Palestinians watched this delicate Egyptian development, they feared a setback for the Fatah-Hamas reconciliation, as Fawzy had been handling the matter and managed to bring both parties to Cairo to sign the reconciliation agreement Oct. 12.

Some Palestinians are linking Fawzy's dismissal to his failure to find quick solutions to the worsening Gaza crises. Palestinian hopes for a free trade zone between Egypt and the Gaza Strip, the opening of the Rafah crossing and the resolution of the pending issues between Fatah and Hamas have taken a severe blow.

Some of the most contentious issues hindering reconciliation remain Hamas' staff, which says it is neglected by Fatah, while Fatah accuses Hamas of not allowing the consensus government to work in Gaza. The two parties do not agree on forming a national unity government, preparing for general elections and reforming the PLO. All these issues remain unresolved.

Hamas leader Osama Hamdan, who resides in Beirut, told Al-Monitor, “Hamas is making calls with the Egyptian intelligence to find out whether it will broker the reconciliation in the coming phase, following the changes in the intelligence system and the dismissal of Fawzy. Although Hamas considers the dismissal an internal Egyptian affair that does not concern it, the party wants to make sure that Egypt will continue brokering the reconciliation. Hamas wants Egypt to reveal which party is hindering [reconciliation] and to pressure it to seek solutions to the stalemates.”

Head of Hamas’ political bureau Ismail Haniyeh said at a press conference in Gaza City on Jan. 23 that he received a call from Maj. Gen. Sameh Nabil, who is currently overseeing the Palestinian dossier in Egyptian intelligence, that day to affirm the ongoing Egyptian brokerage for the reconciliation despite the internal changes. According to Haniyeh, Nabil said that achieving the reconciliation is a deep Egyptian concern and relayed the message from the Egyptian leadership along with a request to arrange a new meeting between Fatah and Hamas in Cairo when the circumstances allow.

Mousa Abu Marzouk, deputy chairman of Hamas’ political bureau, paid a surprise visit to Egypt on Jan. 24 and met with Egyptian intelligence officials to discuss the next steps in the faltering reconciliation.

Abdullah Abdullah, a member of Fatah’s Revolutionary Council and director of the political committee of the Palestinian Legislative Council, told Al-Monitor, “The dismissal of the director of Egyptian intelligence is an internal affair that has nothing to do with the reconciliation. I do not think it will affect its path much, but Hamas does not seem serious about achieving reconciliation. It should have acted more rationally, and should not have relied on promises and temptations from foreign entities I will not name. Palestinian [parties] themselves are determined to see the reconciliation succeed, so we do not have to wait on any foreign influence to make it happen. While we do welcome any help Egypt is willing to provide, we are the ones concerned first and foremost.”

Since reconciliation talks first began under Egyptian brokerage in 2007, five Egyptian intelligence officials have been replaced — Omar Sleiman, Murad Muwafi, Mohammad Chahata, Farid al-Tahami and Fawzy. As part of the recent efforts, Fawzy visited Gaza on Oct. 3 for the first time since the Palestinian division in 2007. He brought with him a message from Sisi, urging Palestinians to complete the reconciliation. But Egypt recalled its security delegation from Gaza in December without giving any reasons. No meetings have been held between Fatah and Hamas in the past few weeks to avoid widening the rift, and calls between them were minimal.

A well-informed Egyptian member of parliament told Al-Monitor on condition of anonymity, “Sisi wants the new director of intelligence to get the Palestinian reconciliation back on track and expedite its implementation. He also wants to remove obstacles impeding the consensus, without leaning toward one party or the other. Sisi intends to hold wide-scale deliberations with the Hamas and Fatah delegations in Cairo and make high-level calls to end the disputes or discordance.”

On Jan. 21, the London-based Arabi21 quoted unnamed Egyptian activists as claiming that the main reason Fawzy was dismissed is that he rejected an alleged deal proposed by US President Donald Trump: to build an alternative country for Palestinians in the Sinai Peninsula and repatriate them there. According to the report, Sisi agreed with Trump’s efforts to pressure Palestinians into accepting the deal, but Fawzy rejected it.

Mukhaimer Abu Saada, a professor of political science at Al-Azhar University in Gaza, told Al-Monitor, “Fawzy worked hard to make the reconciliation a success, including a visit to Gaza. He created an environment of trust for Hamas, specifically for its leader Yahya Sinwar. Fawzy did not fail. Palestinian parties that did not want the reconciliation, and that I will not specify, thwarted his efforts. I found out that President Mahmoud Abbas complained about the Egyptians to the United States because they strongly pushed for the reconciliation.”

During the meeting of the PLO’s Executive Committee in Ramallah on Feb. 3, Abbas asserted that Egypt is no longer as involved in the reconciliation, but did not explain. In an interview on Palestine TV on Feb. 6, Jibril Rajoub, secretary of Fatah’s Central Committee, attacked Egypt’s role in the reconciliation and accused Fawzy of stepping on Abbas’ toes by contacting Fatah and Hamas directly. He also said Egypt was undermining Fatah.

Although Egypt did not give reasons for dismissing Fawzy, Palestinians are afraid that this development might foil the already stagnant reconciliation. Both Fatah and Hamas are waiting eagerly for the appointment of a new Egyptian intelligence director to save the faltering reconciliation.