Another general 'testing the waters' of Egypt's presidential race

Gen. Sami Anan has reportedly announced his candidacy in the upcoming Egyptian presidential elections, but there is some doubt being cast about his intention to run. 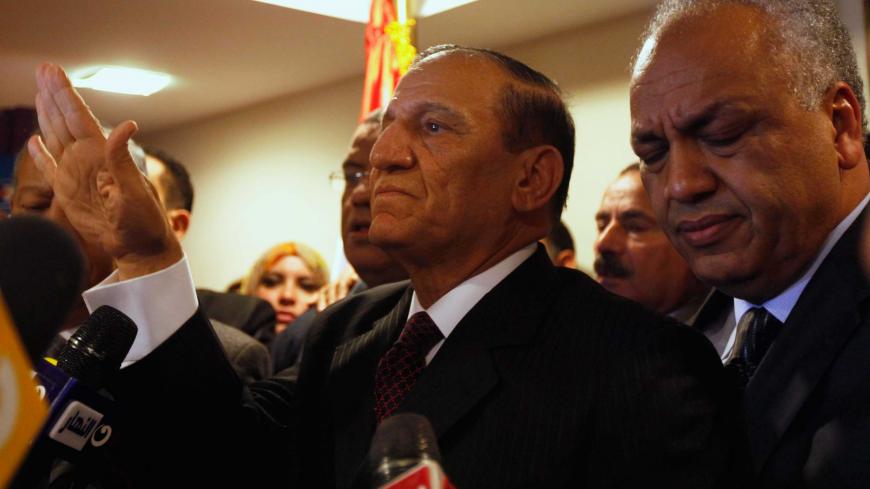 CAIRO — Sami Balah, the secretary-general of the Arabism Egypt Party headed by Sami Anan, a former general, announced Jan. 11 that Anan will run for president.

The announcement sparked controversy in political circles due to Anan’s military background, which is similar to that of former Prime Minister Ahmed Shafiq. Shafiq, who served under former President Hosni Mubarak, withdrew his candidacy after being deported from the United Arab Emirates to Egypt. Also sharing this military background is President Abdel Fattah al-Sisi. Shafiq was a lieutenant general and Sisi served as field marshal.

The debate over candidates with a military background arose after Shafiq’s withdrawal from the presidential race. Shafiq had announced in a video Nov. 29 his insistence on running. His moves led to his deportation to Egypt, and he finally withdrew officially in a statement released Jan. 7.

A source close to Anan’s campaign team told Al-Monitor on condition of anonymity that Anan no longer accepts the marginalization he faced when he was dismissed as military chief of staff by Islamist President Mohammed Morsi on Aug. 12, 2012. Even though Morsi was overthrown the next year, Anan has not been considered for any administrative or political position in the government.

The source said Anan did not want to announce his candidacy himself until he saw public acceptance of his candidacy and had studied the efficacy of such a decision. He said Anan was “testing the waters” as opposed to having a fixed intention to participate in the elections, which the source knows are already in the bag for Sisi.

Balah told Al-Monitor over the phone that the announcement of Anan’s candidacy was made after negotiations with the Arabism Egypt Party’s higher commission and with Anan himself. Balah said Anan would give his approval once 25,000 support signatures from citizens are collected. Anan will announce his detailed stance during a press conference within a week after securing the needed signatures to be accepted as a candidate, as per the Egyptian Constitution.

Balah said Anan’s candidacy did not aim at causing a media buzz or attracting attention, but stemmed from the conviction that there is a need to participate in leading the country into a better future and in taking responsibility during this tough phase.

Samir Anan, Sami Anan’s son, said he knew nothing about his father’s candidacy and dismissed the news in Egyptian newspapers as unconfirmed. Samir Anan told Al-Monitor, “As long as my father has not announced his candidacy himself, we will have to wait and see.” He said he did not know the source of the statement published on his father’s page.

Al-Monitor tried to contact Sami Anan, but he did not answer his phone. He has refused to make any statements to the media.

Anan did have an abortive attempted run for president in 2014, but then announced his withdrawal in favor of Sisi, saying it was in the country’s best interest. This scenario might repeat itself, a source close to the Arabism Egypt Party told Al-Monitor.

The source said Anan left the door slightly open to evaluate his popularity, and added that there are many underlying reasons for Anan’s choice to refrain from announcing his candidacy himself. Anan did not want the decision to be considered official, and he sought to stall without confirming or denying the news, the source said.

The press conference scheduled for Jan. 20 to announce the details of Anan’s decision has been delayed indefinitely, the source said. This step was taken to assess the regime’s stance and to help Anan use his candidacy card to extort the regime into giving him privileges, such as being appointed as an adviser to a government institution. His withdrawal from the presidential race would have a price, the source said.

Anan is popular in Sufi circles as his brother, Hatem Anan, is a Sufi sheikh. But regime supporters accuse Anan of coordinating with the Muslim Brotherhood and receiving support from it. Many consider Anan the Brotherhood’s candidate.

These include Mohamed al-Baz, the editor-in-chief of Al-Dustour newspaper, who said on May 17 during a phone call on Khaled Salah’s “Akher al-Nahar” show on the Nahar 1 channel that $1 billion supporting Anan’s candidacy had been received from Qatari sources. Doha supports the Brotherhood. Anan sued Baz and Salah, who is also editor-in-chief of Youm7, which is known for its support of the regime. However, the case against Baz and Salah was dismissed.

Media figure Ahmed Moussa, who is close to the regime, on Jan. 7 released a leaked recording where Anan is heard talking with opposition figure and former interim Vice President Mohamed ElBaradei. The conversation was reportedly made shortly after the January 25 Revolution, which saw the fall of the Mubarak regime. Baradei is heard talking with Anan about the protesters’ demands to dismiss Shafiq, among other ministers. Observers saw the leaks as defensive steps from Egyptian intelligence officials to show Anan that they can tarnish his reputation and topple him at any moment he decides to compete with the regime represented by Sisi.

The source close to the Arabism Egypt Party said Anan has collected 2,000 signatures from citizens and also ruled out the possibility that Anan could win the election for various reasons. The source said one reason is that the military only wants one candidate from its ranks to run in the election and has the power to enforce this. The source said another reason is that Anan’s ambition is not to reach the presidency, but rather to to announce his candidacy to reap some benefits or to be appointed as an adviser to an Egyptian institution, especially since Anan has long been marginalized by the government.