The contrasts between former Chief of Staff Sami Anan and current Defense Minister Abdel Fattah al-Sisi could not be more stark. 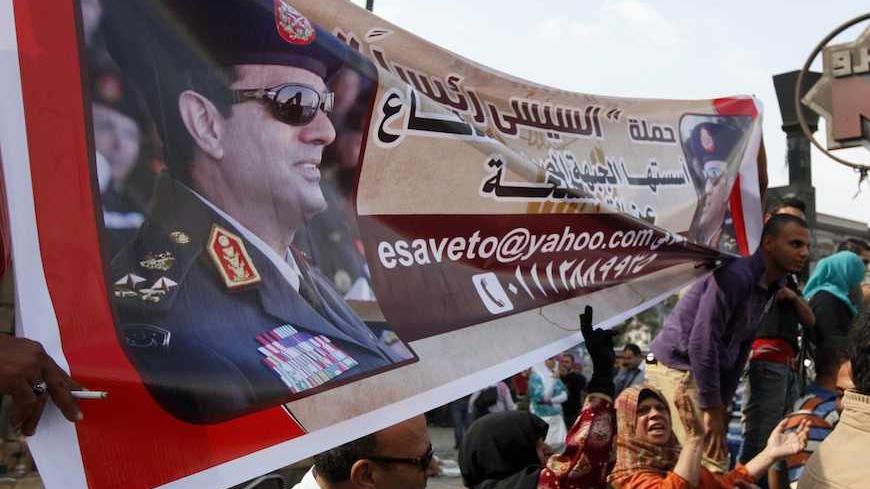 For a nation accused of being blindly in love with its army, Egypt’s former Chief of Staff Sami Anan is a living example that not every general can appeal to the Egyptian public.

Since the Facebook page, “The campaign to demand Gen. Sami Anan run for presidency,” posted a number of pictures of Anan in a civilian suit, an unprecedented  campaign of mockery has flooded social media with Egyptians exchanging various Photoshopped images of him in humorous contexts. Many Egyptians, regardless of their political affiliations have enjoyed a laugh at the expense of the man that was once described a powerful member of the Supreme Council of the Egyptian Armed Forces (SCAF). The mockery of Anan is in stark contrast to the ongoing “Sisi fever.” The fascination with Defense Minister Abdel Fattah al-Sisi has reached an unprecedented level. In addition to Sisi-shirts and posters, Egyptians can now find Sisi-themed chocolate, jewelry, sandwiches, and even cooking oil.

So what is going on? Why have Egyptians responded so differently to these army generals? The answer lies in the character of the two generals and the context in which they handle the public.

Many in Egypt do not know much about Anan, and that is a big part of the problem. Arguably, this was expected from army generals during the Mubarak era, as members of the armed forces were not required to address the public. However, following the ousting of Mubarak, and SCAF’s transitional leadership that ruled Egypt for 17 months after, SCAF’s senior leaders such as Marshall Tantawi, and Lt. Gen. Anan refrained from facing angry Egyptians who revolted against Mubarak in January 2011. Any statement from SCAF was read by an Army spokesman, leaving the public pondering the true intentions of SCAF. The generals’ desire to evade direct contact with the public was understandable, although, in hindsight, it was counter-productive. Right or wrong, SCAF‘s senior leaders came across in a very negative light. For a military man, evading the public during a critical political juncture was fine, if the goal was to retire quietly, but not if there were future plans to run in an election. As such, Anan’s candidacy comes across as an after-thought, and not as a serious well-planned move.

Anan’s demeanor will also now be judged harshly in comparison to the new leader of the Army, Sisi. Unlike the rest of the SCAF generals, Sisi decided to step into the limelight and face the public with brutal, but crystal clear decisions. It was a risky gamble that paid off. Sisi clearly thrived on appealing to ordinary Egyptians. During the October War celebration, General Sisi delivered an unannounced, short, but concise speech. He was soft-spoken, caring, and articulate. His manner drew considerable criticism from his opponents, but it was well received by many Egyptians. For example, he decided to invite an elderly lady — slapped on the face on the day of Morsi’s trial by a pro-Morsi supporter — to honor her, and to ask her to consider him as her son. He has also offered treatment for journalist Saad Hagras and novelist Sabri Moussa, both of whom are suffering from cancer. His gestures may come across to observers as disingenuous, but they were still well received by the public.

To Mubarak: It's no secret that Anan was considered as one of “Mubarak’s poodles.” Anan, a traditionalist army general, who's not very fluent in English, has only studied in Russia and France. Despite his Russian education, he has gone with Mubarak’s flow and re-adapted to pro-American “Mubarakism.” The Americans were allegedly wary of him, but later he became a favorite of the American military. His coziness with the United States is probably the only aspect of his character that the Egyptians are aware of, and again it is not a positive quality that can be appealing to an America-wary public. In contrast, the perception among many in Egypt (rightly or wrongly) is that General Sisi defied the Americans when he ousted Morsi on July 3. His new rapprochement with Russia reinforces this perception.

To Morsi: Anan’s relationship with Morsi is a mystery. SCAF proudly and rightly claimed that it handed over power to the first democratically president. Morsi’s response to SCAF was to order the retirement of Tantawi and Anan, the two most senior figures in SCAF, but it was surprising that Anan accepted Morsi’s offer to join his “advisory council,” a posh name to a meaningless job that has no impact in real life. Further adding to the mystery, Anan resigned from his job immediately after the July 3 coup. The only explanation for the way Morsi handled Anan and Tantawi, is that Morsi probably had a deal with the senior generals; a retirement in return of immunity from prosecution after the January 2011 revolution. Mahmoud Ghozlan, the Muslim Brotherhood spokesman, proposed this immunity, but he was faced with harsh criticism. In an ironic twist of fate, the general that Morsi chose instead, General Sisi, did not follow the same subordinate path.

There are also hints that the relationship between Sisi and Anan is not particularly good. News reports of an alleged copy of a recently released personal diary of Anan were not received well by the new leadership in the military. An army spokesman immediately released a statement saying that media reports on the alleged personal diaries of ex-military officials may create confusion and threaten national security “under these sensitive circumstances.”

It's still unclear whether Anan will go ahead and run for presidency or not, and whether his Facebook support page, or the mocking counter-campaign are any indication of the level of his popularity. However, the assumption that Egyptians just love their top brass is simply wrong. Anan was once described in the US as thoughtful and astute, but his cautious — and arguably poor — management of the post Mubarak transitional period (along the side of ex-Defense Minister Tantawi) has earned him less enemies, but also failed to win him the hearts and minds of many Egyptians.

Nonetheless, the journey to next summer’s presidential election could be full of surprises. No one can predict whether Sisi’s popularity will continue to rise or gradually fade, and whether Anan can bounce back and convince Sisi to stay in the shadows. Nothing is predictable in Egypt other than its unpredictable politics.