Four questions about a Sisi run for president of Egypt

It is time to consider the reasons behind a potential presidential run by Field Marshal Gen. Abdel Fattah al-Sisi and what it means for Egypt. 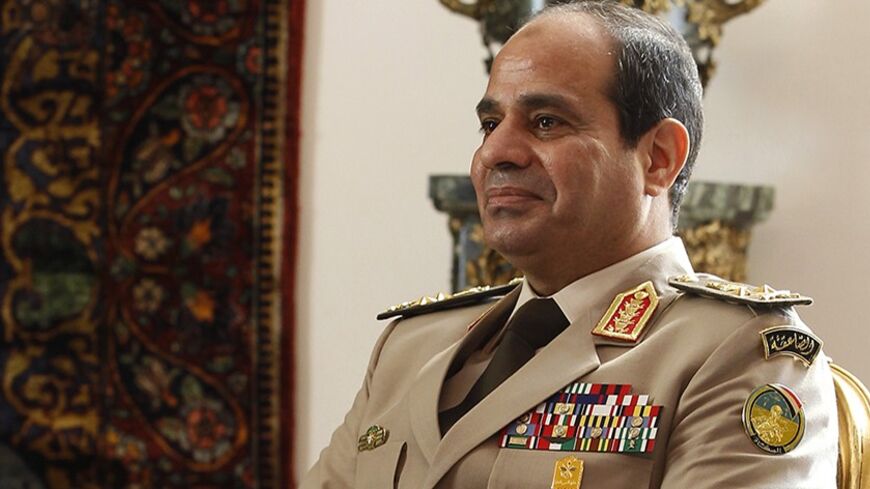 On Jan. 27, two important developments took place in Cairo. The first was that interim President Adly Mansour promoted army chief Abdel Fattah al-Sisi to the rank of field marshal. Hours later, the Supreme Council of the Armed Forces (SCAF), which is headed by Sisi, officially convened to discuss the latest developments in the country as well as the issue of Sisi’s much debated and expected (and much demanded in some circles) nomination to the nation’s presidency.

While SCAF's resulting statement said that Egyptians will eventually make their will known through the ballot boxes, it did say that “SCAF could only look with respect and high regard to the will of the broad masses of Egypt’s great people in nominating Gen. Abdel Fattah al-Sisi to the presidency of the republic, and it considers this a [formal] commissioning and commitment.” The rest of the statement followed in the same tone, focusing on the voice of the public as being the main driving force behind this move. Sisi has yet to officially announce his candidacy, likely in part due to procedural issues including the necessity of his registration in the voters database, but it is largely seen right now as a foregone conclusion.

Obviously, a slew of commentary followed, mostly divided between those who proclaimed the prospects of a progressive civilian democracy in Egypt comatose and those proclaiming Sisi to be the man Egypt needs, the only one who could exercise real influence over Egypt’s Pandora’s box of state institutions, and even going so far as to suggest that he might even prove to be a reformer once he is officially in charge. But four main questions stood out:

1.  Why did he (at least officially) change his mind and run for office, considering all the previous statements and analyses that argued that it would be better for him to stay on as head of the military? To recap one chief argument of such an analysis, the upcoming president would be embroiled in the whirlpool of quotidian politics and will lose any buffer he once had from the merciless daily pressures of politics and economics. Thus, Sisi would be better off as the savior who returned to his post after intervening. Another argument reasoned that Sisi’s presidency, if not well performing, would negatively reflect on the military as a whole, something particularly unhelpful after SCAF’s unsuccessful turn at the helm in 2011-2012. A third major argument went that it would weaken the narrative that held the military intervened in July 2013 to “correct the nation’s democratic course” and not to take power. The question of why Sisi has seemingly decided to run becomes even more pertinent given the passage of the new constitution, which gives the SCAF veto power for two presidential terms over nominations for defense minister.

In the end, two broad categories of answers are suggested. The first is the pragmatic and analytical, considering what could be seen as a lack of attractive alternative candidates the military could effectively support and whose potential for victory is solid, a desire (and perhaps perceived necessity) to remain at the heart of the transitional and post-transition phases Sisi and the military put in place and making sure no unexpected figures rise to the office of the presidency (and perhaps to avoid unwanted surprises, à la Morsi’s November 2012 decree, coming from whoever might inhabit that office at this critical time). But the second is more personal in nature: The man appears to be a true believer. While mindful of all the analysis, a sense of personal calling perhaps eventually persuaded Sisi. Of course, that sense hasn’t exactly been discouraged by the intense media campaign to get him to run as well as what seems to be an undeniably substantial degree of popularity.

2.  What is the significance of this turn of events? Clearly, this could be debated at length. But one key issue here is how the military’s short statement appears to have brought the institution deeper into national politics, and in a truly unique way. Sisi has effectively now become the military’s nominee. As the military is the key state institution, especially right now, he also becomes the state’s nominee by extension. This effectively renders the upcoming presidential elections an asymmetrical game from the start, to say the least. Already one major alternative candidate — for example, Ahmed Shafiq (who was former President Hosni Mubarak’s last prime minister and a former presidential candidate in the runoff against Morsi) — has announced that he is indeed no longer running and will support Sisi. Also, those who had hoped for some degree of eventual detente with the Islamists under a more dovish president (someone potentially like Hamdeen Sabahi), someone who could be relatively more acceptable for the Muslim Brotherhood to reach out to, are seeing such a detente as an even more unlikely scenario now.

3.  An extension of the second question: Can he lose the elections? Highly unlikely. Almost no real competitor comes to mind right now. Ahmed Shafiq, as explained above, is out. Former SCAF second in command Sami Anan is running, and he seems very adamant about his campaign. But he’s increasingly seen as a representation of a bygone era, and the army’s statement endorsing Sisi’s nomination effectively squashes Anan’s candidacy and many of his own presumed selling points as a figure of stability and the military, while his campaign has already received a not-so-warm response thus far. Amr Moussa is both of a advanced age to run and has wholeheartedly jumped on the Sisi support bandwagon. Hamdeen Sabahi remains theoretically in the race, but he’s unlikely to be able to defeat Sisi in the elections. Abdel-Mon’eim Abul-Fotouh’s chances are also very limited if he does run. Meanwhile, the Salafist Nour Party said it will neither field a candidate nor support an Islamist in the upcoming elections, while the Brotherhood is quite unlikely to even try to field an official candidate, nor would it find it easy to work on any form of campaigning. Sisi is likely to win in the first round.

4.  What kind of president would he make? Obviously, no one could answer that kind of question right now. As a man who spent his life away from the limelight, very little is still known with regard to Sisi’s political and economic outlooks. But certain factors will likely be of great influence. The first is his personal drive, which appears genuinely nationalist, populist and impassioned. The second is why he was pretty much called upon to run: the need for security and stability. This would thus likely be at the forefront of at least the first year or two of his presidential term, while support from Egypt’s Gulf allies could temporarily help alleviate the economic woes. But the question then becomes what more could he be expected to do that the current heavy handed government hasn’t already been doing? The third, very potentially, could remarkably be the January 25 Revolution. Having publicly and repeatedly endorsed the revolution and criticized the Mubarak era, Sisi could likely find himself forced to maintain some distance from some of the more key figures from that time and eventually embark on some reform, especially to push the narrative that Egypt is moving forward, not backward. The Mubarak-distancing issue will become a very complex matter come the parliamentary elections. There simply does not appear to be a single party or coalition that is clearly poised to become the new ruling party of Egypt, which the president would either chair, come from or have a relationship with. Eventually, such a party or coalition is expected have a strong influence on where the country heads.

In any case, as one finds himself increasingly saying lately about all things Egypt, time will tell.