The Egyptian authorities' decision to hold presidential elections before parliamentary elections will strengthen Gen. Abdel Fattah al-Sisi's chances of winning, if he runs, but he could still see a decline in popularity during the campaign. 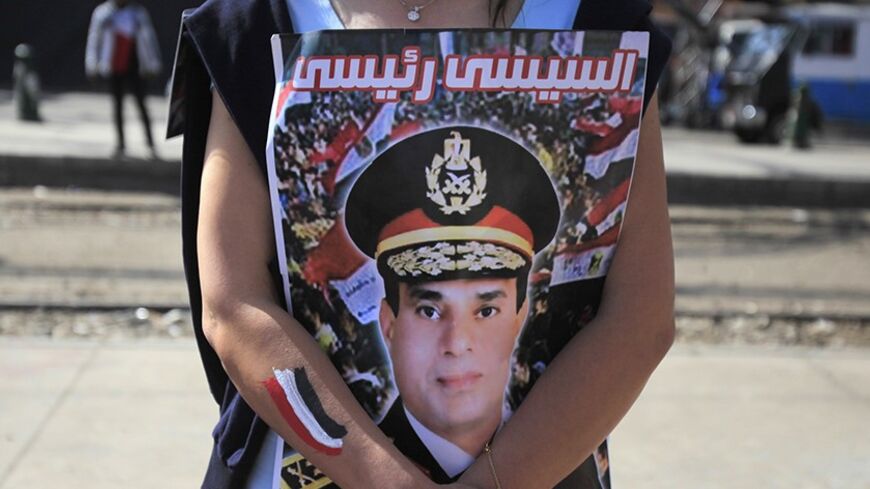 First came the popular demand that Egyptian Defense Minister Abdel Fattah al-Sisi run for president. Then came reports that he intended to run, followed by a referendum through which the masses declared their support for his candidacy. On the third anniversary of the January 25 Revolution, there were continued widespread demands that he run. The government then promoted him to the position of field marshal, leading many to expect that he would resign within hours. Finally came the announcement by the Supreme Council of the Armed Forces (SCAF) mandating Sisi for president.

Thousands of Egyptians, both supporters and opponents, had been waiting for news of Sisi's mandate. Sisi’s nomination was a turning point for those hesitant to describe the events of June 30 as a coup; now, they are certain it was. For those who describe June 30 as a revolution, Sisi becoming president would mark a happy end to their road map. And for those who had considered running for president, Sisi’s nomination is a sign for them to withdraw. Everyone realizes that Sisi will win the election, despite factors that could make a victory difficult.

These prospective candidates agree on Sisi’s overwhelming popularity, observed Rashed. Moussa, head of Egypt’s committee of 50 responsible for drafting the new constitution and a 2012 presidential candidate, said in a Jan. 9 Dream TV interview with journalist Wael al-Ibrashi, “Should Sisi run for presidency, he will win with a landslide majority.”

On Jan. 16, many news websites quoted Moussa as saying he will not run for the presidency because “the people want Sisi.”

In a Sept. 19, 2013, interview with ONtv, Sabahi said, “Sisi is a popular hero and is most likely to win if he runs in the elections.”

Hossam Mouanes, former head of Sabahi’s electoral campaign, told Al-Monitor, “In light of the current criteria and estimates, one can confidently say that Sisi will win by a landslide if he runs in the elections.”

Ahmed Imam, media spokesman for the Strong Egypt Party founded by former presidential candidate Aboul Fotouh, told Al-Monitor, “A landslide victory is unlikely to happen. However, holding early presidential elections makes Sisi the most likely candidate to win, given the mobilization of government media outlets and apparatuses to support him.”

Meanwhile, Yehya Kadri, vice president of the Egyptian National Movement, which is close to Shafiq, stated during a Jan. 16 interview on Egyptian Dream TV that Sisi will win by a landslide.

“The state will choose to hold the presidential elections first, if it wishes to support Sisi,” Imam told Al-Monitor. He believes that holding presidential elections as soon as possible is the biggest guarantor of Sisi's victory. “However, should things drag on, every minute lost will mean a decrease in his popularity, which is not the same now as it was immediately following June 30,” he said.

Meanwhile, Wael Abu Sheaishea, spokesman of the pro-Sisi Pulse of the People Campaign, told Al-Monitor that holding the parliamentary elections before the presidential election would have caused political tensions among the various pro-Sisi political factions, and that such a situation would weaken their pro-Sisi consensus.

The military and the Hosni Mubarak regime

Mouanes said, “One of the reasons that may cause Sisi’s large popularity to drop, is that most of the figures supporting his candidacy for president are affiliated with the Mubarak regime.”

“In a recent press conference, Sisi said he would not run for presidential elections unless there is a popular demand and a mandate from the army. This statement confirms the consideration that Sisi is the candidate of the military establishment,” Mouanes added. He explained that the presence of a candidate representing the army will not ensure the state institutions’ impartiality in implementing the electoral process.

Sisi is a presidential candidate

Imam said that if Sisi presents himself as a presidential candidate, his popularity could decrease, as “the engagement in an [electoral] competition and media appearances could show his weak political or media talents, or weak charisma and economic program.”

Imam added that the presidential candidates must include in their platforms a plan to reach a national consensus to end the current struggles in Egyptian society. Sisi, along with the icons of the current regime, are part of the political conflict against former President Mohammed Morsi, Muslim Brotherhood leader Khairet Shater and members of the Brotherhood's Guidance Office.

Imam believes that holding the parliamentary elections first would have given the Muslim Brotherhood time to reorganize and unite behind a rival candidate to Sisi. It would also have given the Brotherhood the opportunity to destroy Sisi’s popularity by spreading rumors or new leaks.

He told Al-Monitor that if the parliamentary elections were held first, then by the time the presidential elections arrive, Sisi’s popularity would have declined because his supporters would discover “his inability to eliminate the Brotherhood or terrorism, which has worsened.”

It could be argued that even though Sisi’s expected presidential rivals agree that he is the most likely to win, delaying the presidential election could weaken his popularity as he campaigns and appears on TV. The political consensus surrounding Sisi would be affected by the divisions caused by the parliamentary elections. Moreover, the period before the parliamentary elections would be an opportunity for the Muslim Brotherhood to reorganize and unite behind a presidential candidate, possibly Aboul Fotouh, who would have the best chance at victory among Sisi's rivals.

Sisi’s popularity is at its peak and that of his opponents is at its lowest. By moving forward with the presidential election, the government has blocked the first opportunity to weaken Sisi. But once Sisi starts campaigning and appearing in the media, and if the Brotherhood supports another candidate, his level of support could weaken.