Who will run against Sisi in Egypt’s elections?

Would-be candidates for the Egyptian presidential elections will most likely be unable to ensure enough support to participate in the race. 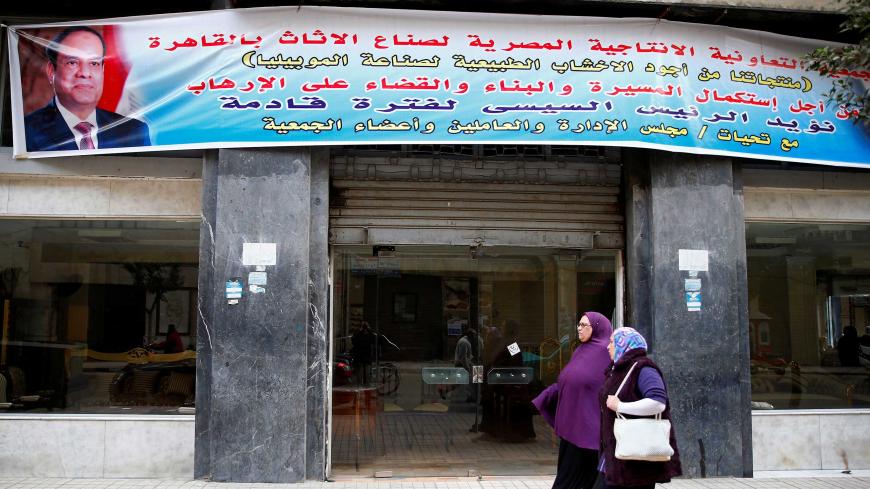 CAIRO — The National Electoral Commission (NEC) in Egypt officially announced Jan. 8 the dates for the presidential elections, which look like a replay of the 2014 elections, with President Abdel Fattah al-Sisi at the forefront. The voting will begin in March, and the winning candidate will be announced in early May.

According to the Egyptian Constitution, preparations for the presidential elections begin four months before the current presidential term ends. The results are announced at least a month before the end of the term. Sisi began his current term in early June 2014 and it will end May 31.

The electoral commission was criticized for the candidacy request timeline, which was considered too short to collect signatures from citizens, thus making it harder for potential candidates to run. According to Article 142 of the constitution, a presidential candidate must collect 25,000 supporting signatures from citizens from 15 governorates or recommendations from 20 members of parliament.

Former parliamentarian Mohamed Anwar al-Sadat, whose name was among the proposed candidates, told Al-Monitor that it will be difficult for a candidate to collect 25,000 signatures from 15 governorates within the timeline, and that any candidate who wanted to enter the competition would then reconsider. He also said it would be tough to get the recommendations from legislators.

The director of candidate Khaled Ali’s presidential campaign, Hala Fouda, told Al-Monitor, “The timeline is pressing.” She said more time should have been given to allow potential candidates to organize themselves and collect signatures, adding that candidates have less than three weeks to collect 25,000 signatures before the deadline.

So far, Sisi has not clearly stated he would run for a second term, but observers say that he has the biggest chance to win. The state institutions are supporting him, especially after former Prime Minister Ahmed Shafiq — who is considered a supporter of Hosni Mubarak’s regime and almost won the 2012 elections after the January 25 Revolution — withdrew his decision to run for president at the end of November. Reportedly, he faced pressure from the regime to withdraw.

When the signature collection started Jan. 9, 516 parliamentarians out of a total of 593, and in particular Speaker Ali Abdel Aal, rushed to write recommendations nominating Sisi. Ali has not received any parliamentary recommendation, according to his campaign director.

President Mohammed al-Suweidi of the Egypt Support Coalition, which has the parliamentary majority, defended in a Jan. 10 statement parliament’s support for Sisi in the upcoming elections and said Sisi deserves a second term to continue the accomplishments he began in the first term, such as the economic reform program.

Ali declared his official candidacy for the presidential elections in a Jan. 11 press conference attended by Al-Monitor. He said in an enthusiastic speech before his supporters, “The battle will be tough, and some consider it impossible, but our bets are on these people.” He pledged to submit his candidacy papers by Jan. 25.

Fouda said that despite the regime crackdown against potential candidates, ostensibly due to the state of emergency that is coinciding with the elections, citizens have signed petitions for Ali to be able to run, pushing him to stand his ground in the presidential race. Fouda said the campaign requested but did not get guarantees from the regime that included halting the state of emergency and ending pro-Sisi propaganda.

Sadat said, “The security institution is clearly interfering — far from the NEC radar — in favor of the current regime. This is the real problem.” He said state institutions consider the president as being worthy of all this support in the elections.

On Oct. 30, the Ashan Tebniha (To Build It) campaign led by Egyptian members of parliament close to the regime collected more than 3 million signatures, including those of citizens, officials, public figures and artists in various governorates to nominate Sisi for a second presidential term.

The restrictions and interference pushed Sadat to back out of the presidential race. He said at a press conference Jan. 15 that the “current political climate” is not favorable for free elections.

Hassan Nafaa, a professor of political science at Cairo University, said that according to the data on the ground, the stage is set for Sisi to have a second presidential term. He said there are no major players in the presidential race, as figures such as Shafiq who are capable of leading the country have withdrawn.

Nafaa said, “I think Shafiq was forced not to run. It was obvious that the regime would not allow any military or prominent figure to run in the elections.”

The professor added, “The current environment is not suitable for real elections, and all the indications coming from the regime show that it does not want real elections. Media outlets made many attempts to tarnish the image of potential candidates and pursue them legally.”

He said Ali’s candidacy would benefit Sisi by showing the public that the elections allowed opponents to run against the president, which would be proof of his popularity should he win. These elections are likely to resemble 2014, when Hamdeen Sabahi got 3% of the vote as opposed to 96% for Sisi.

Fouda said that even if Ali fails to win, this will transmit an important message to the regime of a rejection of its policies.

Egyptian author Mohammad Shouman wrote in Al-Hayat on Jan. 10 that Sisi’s accomplishments ensure him a worthy victory in any election, despite his decreasing popularity. He said Sadat's and Ali’s chances against Sisi are almost nonexistent.

Shouman said many challenges await the elections, mainly the loss of credibility due to the absence of strong candidates such as Shafiq. As a result, citizens might refrain from voting and the elections might resemble a referendum, rather than a contested vote between candidates, renewing Sisi’s mandate.