How is parliament supporting Sisi candidacy in 2018 elections?

Members of Egypt's parliament took part in the "To build it" campaign and worked on postponing the discussion and approval of some draft laws that would negatively affect President Abdel Fattah al-Sisi's popularity, as part of the efforts to endorse his candidacy for a second presidential term. 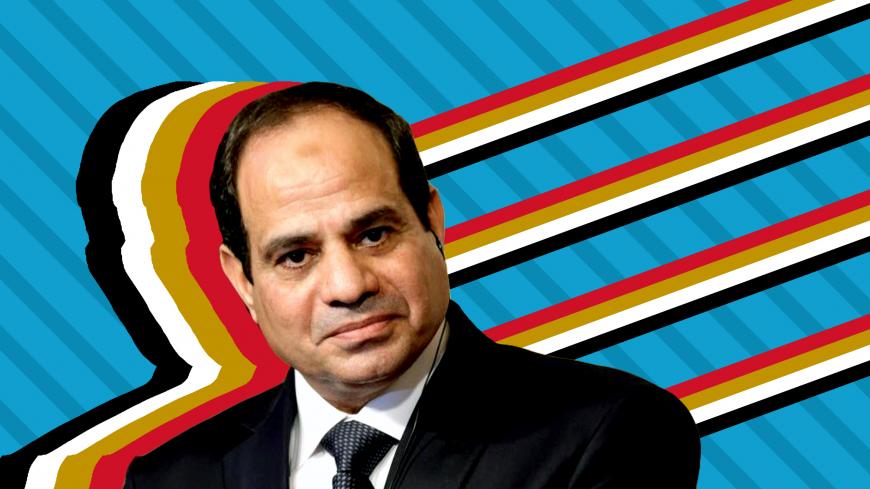 CAIRO — In early November, the “Together with you for the sake of Egypt” campaign — which launched Oct. 10 — inaugurated its offices in Giza and Alexandria with the goal of publicizing the advantages of Egyptian President Abdel Fattah al-Sisi's rule. Mohammed Arabi, a founder of the campaign, told the press that once the campaign’s legal documents are ready, offices in other governorates also will be opened, to shed light on national projects introduced under Sisi's rule.

Members of parliament of the Support Egypt bloc, Free Egyptian Party and the Nation’s Future Party took part in the “To build it” social media campaign, designed to collect signatures promoting Sisi’s candidacy in the 2018 presidential election, which can be held in May at the latest.

In addition, a series of measures are being taken by parliamentarians to postpone the discussion or approval of draft laws that would have a negative impact on Sisi's candidacy, at both popular and economic levels. Most recently among these measures is the decision to put off the discussion of the rent draft law, parliament member Moataz Mahmoud, who proposed the bill, told Al-Monitor.

The rent draft law aims to liberalize the relationship between the apartments’ owners and the roughly 3 million tenants who benefit from rent control, provided that the rental prices are in line with the prevailing current market price.

Mahmoud, who is also the chairman of the parliamentary Housing Committee, said the discussion of the draft law was postponed to the next legislative session, starting in October 2018. This is because more hearings need to be held, and because the Egyptians are currently preoccupied with the presidential election. He said the discussion was postponed during the current legislative session he presides over, which started in October, to prevent some from taking advantage of the draft law to provoke public opinion.

According to Mahmoud's proposal, the bill seek to increase the rental value on rent controlled properties by 10% annually and to reach market value in 10 years.

It was also decided at the end of the previous legislative session to postpone to an unspecified date the discussion of a draft law on merging the formal and informal economic sectors at the tax level, member of parliament Fayka Fahim, who introduced the draft law, told Al-Monitor. Parliamentarian Amr Ghalab, the chairman of the Economic Affairs Committee and member of the Support Egypt bloc, told the press in July that the committee decided to postpone the bill that was presented during the last legislative session, as it needs a full strategy and a public dialogue, and is not a draft law that can be easily approved.

Amr al-Gohary told Al-Monitor such a law would negatively affect small enterprises and trades, and would lead to an increase in unemployment rates. He said it would be difficult to adopt in the current legislative session.

Also, the Support Egypt bloc backed down on the idea of ​​amending the constitution, which was set to be a part of the parliament's agenda early in the current legislative session (October 2017-June 2018). This was postponed until after the presidential elections. A source in the parliament's General Secretariat told Al-Monitor that the secretariat that is supposed to receive bills or proposals to amend the constitution refused to take any proposals, after people in high places recommended that this subject not be tackled before the upcoming presidential elections, because of its possible negative effect on Sisi's expected bid for re-election.

Article 142 of the constitution stipulates, “To be accepted as a candidate for the presidency, candidates must receive the recommendation of at least 20 elected members of the House of Representatives, or endorsements from at least 25,000 citizens who have the right to vote, in at least 15 governorates, with a minimum of 1,000 endorsements from each governorate. In all cases, no one can endorse more than one candidate.”

The "To build it" campaign published a copy of the petition calling for Sisi's candidacy. A number of parliamentarians, media figures and celebrities signed it as a first step, followed by other Egyptians' signatures in the various governorates. The members of parliament sought to print thousands of copies of the petition, and they opened electoral and service offices to receive citizens wishing to sign the petition.

Mohammad Rashwan, a member of the Support Egypt bloc’s political bureau, told Al-Monitor that the coalition, which has a parliamentary majority, is now working on accelerating the issuance of a number of laws that serve the interest of the state, and through which Sisi could be supported on the street and politically, including the consumer protection law, unified building law and criminal proceedings law.