With an eye on Egypt's presidential elections in March 2018, opposition candidates are preparing to potentially run against President Abdel Fattah al-Sisi and for any suppression they may face from the regime. 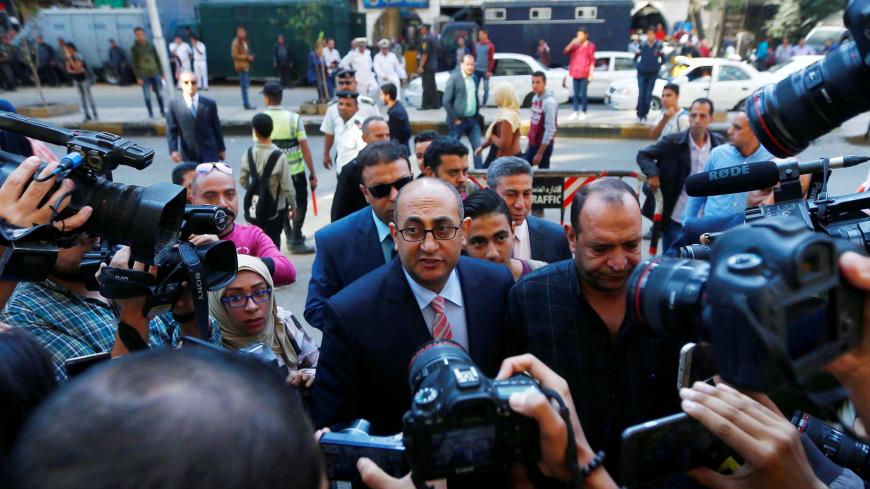 CAIRO — Khaled Ali announced at a Nov. 6 press conference at the headquarters of Egypt’s Dostour Party his candidacy in the upcoming presidential elections, scheduled for March 2018, saying he has started forming his campaign team.

Ali is a human rights lawyer and politician, a member of the Coalition of Socialist Forces and the director of the Egyptian Center for Economic and Social Rights. He is the co-founder of the Front for the Defense of Egyptian Protesters, which has been providing legal support to peaceful protesters since April 2008.

Ali ran in the 2012 presidential elections, one day after his 40th birthday, thus becoming the youngest ever candidate to run as soon as he reached the minimum age of candidacy. However, he came in seventh place, getting just 0.5% of the vote.

Meanwhile, Egyptian President Abdel Fattah al-Sisi has hinted that he intends to run for a second term. In an interview with CNBC on Nov. 7, he said he would not seek a third term. “I am in favor of preserving two four-year terms and not to change it. … I am saying that we have a new constitution now and we are working on making new laws to abide by it in the country of Egypt. I am not in favor of any amendments to be made to the constitution in this period.”

During a discussion on women’s role in decision-making positions, at the World Youth Forum that was held in Sharm el-Sheikh from Nov. 4-10, Sisi mentioned the 2018 presidential elections. He said that empowering women is not only achieved by having access to jobs and positions in society, but by truly appreciating every woman, girl, man and boy. “I do not want any man getting me wrong here, particularly since the elections are approaching,” he jokingly added.

At his press conference, Ali tried to highlight the crises that have taken their toll on Sisi’s popularity. “They said no one is feeling the suffering of the Egyptian people, then crushed it with price increases. They vowed to protect the land, then generously gave up Egypt’s islands,” he said. Ali was referring to the floating of the exchange rate in accordance with supply and demand mechanisms on Nov. 3, 2016, which led to a significant rise in prices. Also, Sisi ratified on June 24 the maritime demarcation agreement, known as the Tiran and Sanafir Agreement with Saudi Arabia, disregarding the mass demonstrations in protest against it.

This agreement had an important role in making Ali the famous man he is today. He was the one to defend the Egyptian identity of both islands, and filed a lawsuit to nullify the agreement and keep Saudi Arabia from taking over. Indeed, his efforts were an initial success and the Supreme Administrative Court issued a final ruling Jan. 16, nullifying the agreement and preserving Egyptian sovereignty over the two islands, before parliament discussed and approved the ruling.

On May 30, several political parties and movements issued a statement saying they were continuing with preparations to enter the presidential elections, despite all the authorities’ attempts to block them. They said it has become imperative to provide a democratic alternative to existing policies, as the current authority is ineffective and no longer has any means other than oppression.

Practically speaking, Ali’s chances in the presidential race are slim. Article 142 of the constitution stipulates, “To be accepted as a candidate for the presidency, candidates must receive the recommendation of at least 20 elected members of the House of Representatives [where the pro-Sisi Egypt’s Support Coalition has a majority of seats] or endorsements from at least 25,000 citizens who have the right to vote, in at least 15 governorates, with a minimum of 1,000 endorsements from each governorate.”

Besides, a misdemeanor court has accused Ali of offending public decency, following a photograph circulated on social media showing him making an “obscene hand gesture” after the nullification ruling; his hearing has been postponed to Jan. 3. Should he be found guilty, he could be prevented from running in the elections, since the constitution stipulates that a presidential candidate cannot be convicted in any “public indecency” cases.

Meanwhile, opposition figures are being marginalized in Egypt's political life, with zero presence on the political scene and barely any in the street. Former candidate Hamdeen Sabahi, Sisi’s biggest rival, announced May 5 that he would not run in the next elections, while Abdel Moneim Aboul Fotouh, a former candidate and defector from the Muslim Brotherhood, is completely out of the picture, given the social hostility toward the Islamic political current. As for Judge Hisham Geneina, the former head of the Central Auditing Organization, there are legal obstacles to his nomination, due to his wife’s Palestinian citizenship, which is a violation of the constitution.

Ahmed Darrag, a member of the National Association for Change, told Al-Monitor that the regime is deliberately isolating and marginalizing the opposition. But he also believes that if the election guarantees equal chances for all candidates, in terms of campaigning, media appearances and international supervision of the elections, the result will not be in Sisi’s interest, given the regime’s tendency to suppress freedoms and force people to keep quiet.

However, many think that Sisi, in addition to having a built-in institutional advantage, will win many votes because of his removal of the Muslim Brotherhood from power.

Darrag said, “We will ask for international supervision of the presidential elections. It is a basic demand for the opposition to continue in the race, particularly since there are signs that candidates do not have equal chances of winning, which violates the constitution. For instance, the ‘So You Can Build It’ campaign visits government institutions, newspapers and all media outlets, distributing pamphlets calling on Sisi to run for a second term. Certainly no government institution would allow any other candidate to distribute similar pamphlets to its employees, encouraging them to vote for him.”

Because the opposition’s voice is barely heard in Egypt, Ali's chances likely depend on his winning a unified endorsement from civil parties and forces, running a campaign that is as good as Sisi’s propaganda and the presence of international supervision that would ensure the integrity of the presidential election.