Can Sisi rival gain support of Egypt's Copts in 2018 elections?

Ever since former Prime Minister Ahmed Shafiq announced his intention to run in the 2018 Egyptian presidential elections, many observers and analysts have been speculating about his ability to win those elections. 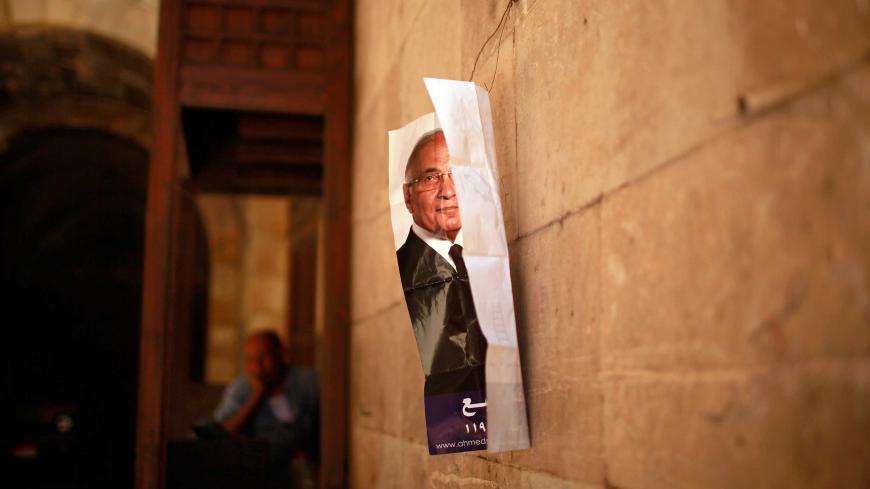 A man sits outside a shop as a poster of presidential candidate Ahmed Shafiq is seen hanging on a wall in Cairo, Egypt, June 13, 2012. - REUTERS/Suhaib Salem

CAIRO — Just like in 2012, religious institutions in Egypt continue to influence the actions of candidates running for the 2018 presidential elections. Local press reports from Nov. 30 said that former Prime Minister Ahmed Shafiq had contacted a number of politicians, including leaders in the Salafist Nour Party, before he announced Nov. 29 his intention to run for the 2018 elections.

Also, a number of journalists and politicians who support President Abdel Fattah al-Sisi — such as Dandarawy al-Hawari, the executive chief editor of the Youm7 newspaper — have focused on the ties that Shafiq forged in 2012 with the Salafist Dawa Party and its political arm, the Nour Party, as a means of disparaging Shafiq among the popular bases and the opponents of any religious role in politics.

The Muslim Brotherhood and its political arm, the Freedom and Justice Party, faced such an opposition on the part of people who refused any religious role in politics, before the Egyptian armed forces toppled former President Mohammed Morsi on July 3, 2013. This came following popular protests that broke out against Morsi and the Brotherhood on June 30 of the same year.

Hawary wrote in a Dec. 5 article in the Youm7 newspaper, “Shafiq keeps issuing slogans while only working for his own interest. This was made evident in the 2012 presidential elections when he worked hand in hand with the Salafists and turned into a Salafist. He hosted Yasser Borhami, a top Salafist, in his house on the eve of the elections for coordination purposes.”

Borhami, the deputy chairman of the Board of the Salafist Dawa Party, confirmed this meeting around three months after the elections in an interview he gave to the Ana Salafy website on Sept. 27, 2012.

In this context, the question arises as to whether Shafiq will manage to mobilize the Egyptian influential religious blocs, such as the Salafist Dawa Party and the Copts. These two groups are the only remaining religious blocs in Egyptian society following the isolation of the Muslim Brotherhood and the detention of most of its leaders on charges of terrorism, knowing that some of these leaders have escaped such sentences by fleeing abroad.

Hassan Nafea, a senior political analyst and former head of the political science department at Cairo University, told Al-Monitor, “Shafiq’s candidacy announcement has surely created a political buzz. If he actually runs for the upcoming presidential elections, then the elections would look like a second round of the 2012 elections, which saw Shafiq and Morsi — two strong candidates — compete against each other. These candidates have the ability to mobilize entire voting blocs.”

The first round of the Egyptian 2012 presidential elections witnessed a competition between 13 candidates, most notably Amr Moussa, a former minister of foreign affairs and former secretary-general of the Arab League; Hamdeen Sabahi, a leftist; Abdel Moneim Aboul Fotouh, a former member of the Muslim Brotherhood; Khaled Ali, a human rights lawyer; Shafiq; and Morsi. The second round saw Shafiq and Morsi compete against each other, as Shafiq got 12.3 million votes and Morsi won the presidency with 13.2 million votes.

Nafea added, “Shafiq tends to forge alliances for the sake of attracting votes. In the first round of the 2012 elections, media outlets presented Moussa as the strongest presidential candidate. Although many voters perceived Shafiq and Moussa as an extension of the [Hosni] Mubarak regime and as two outright enemies of the Muslim Brotherhood, Shafiq still managed to attract votes in the days leading up to the elections. He did so at the expense of Moussa in the first round through a number of deals and agreements he mainly made with religious blocs such as the Copts, and at the expense of Morsi through a deal with many Salafists who are staunch opponents of the Muslim Brotherhood.”

Asked about his predictions for the 2018 elections, Nafea said, “The bloc made up of the Salafist Dawa Party and the Nour Party is still fragile. Sisi only kept them in political life because they were an essential part of the agreement to overthrow Morsi. However, they faced under Sisi restrictions on public speaking. One example is the Law of Oration [issued in 2014], which subjected mosque sermons to the Ministry of Endowment’s pre-approval. Also, regime supporters won the majority of the parliament at the expense of the Nour Party in 2015. Yet still, it is going to take the Nour Party some political boldness to announce its support for Shafiq, because another Sisi mandate would only further tighten the noose on the party [in the event that they supported Shafiq and he lost].”

Salah Abdel Maaboud, a member of the Supreme Council of the Nour Party, told Al-Monitor, “The Supreme Council of the party did not discuss Shafiq's candidacy, and no contact was made between the council and Shafiq. There may have been some contacts with some members of the council, but the matter has not been and will not be discussed until the presidential elections actually kick off. President Sisi has not yet announced his intention to run for those elections, and we cannot declare our support for a specific candidate until all the candidates have been announced by the High Elections Committee.”

Nafea ruled out that the Copts would vote for Shafiq and said, “In the 2012 elections, the Copts supported Shafiq out of fear that Morsi and the Muslim Brotherhood would win. All they knew about Shafiq was promises he did not deliver on because he did not win. It is difficult for the largest Coptic bloc not to vote for Sisi, whom they believe has made an achievement in protecting them by overthrowing the Muslim Brotherhood and granting them the right to establish places of worship. Yet still, some young opponents may root for Shafiq as a punitive measure against Sisi, whom they consider to be behind the arrest of many of their colleagues in the Shura Council demonstrations in 2013 and the Tiran and Sanafir protests in 2016.”

Nafea’s point of view is supported by Coptic thinker Kamal Zakher, who told Al-Monitor, “Shafiq is a veteran politician and a national symbol, but I think Sisi’s chances are better as the latter became a national symbol by pouring his heart out to fight the Muslim Brotherhood and overthrow Morsi. This symbolizes the state’s struggle for survival and development in the face of that group and all the countries that support it financially and politically.”

Sisi’s chances are seemingly better than Shafiq’s when it comes to attracting the votes of the two above-mentioned blocs. While most of the Copts are likely to vote for Sisi in recognition of his struggle against the Muslim Brotherhood, the Salafists do not seem to be lured by Shafiq into taking the risk of supporting him, knowing that such support could further tighten the noose on them in the event that Sisi wins a second term.