Accusations of election fraud in 2012 leveled by the former minister of civil aviation and the last prime minister under Hosni Mubarak, Ahmed Shafiq, return to haunt Egypt’s courts as Shafiq’s possible return to politics starts to materialize. 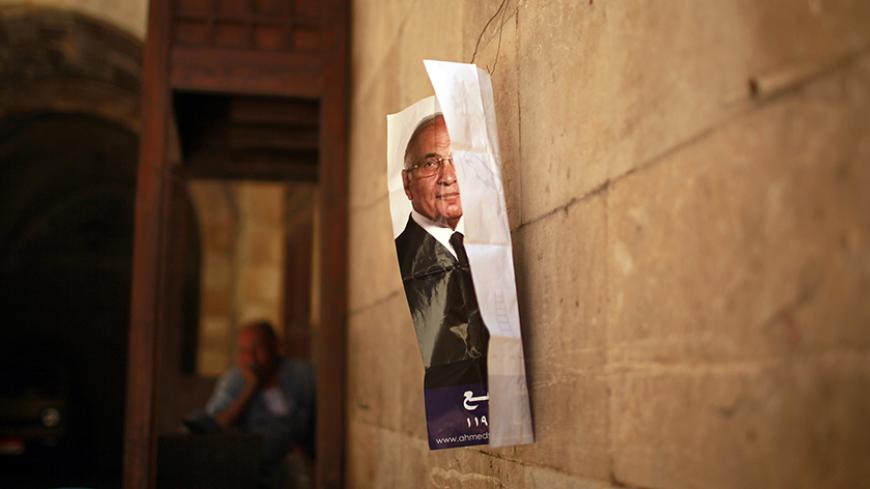 A man sits outside of a shop as a poster of presidential candidate Ahmed Shafiq is seen hanging on a wall in Cairo, June 13, 2012. - REUTERS/Suhaib Salem

Egyptian activists Hamdi Habib and Mohammad Imam started in April 2014 a campaign they named “You’re the President,” calling on Ahmed Shafiq, the former minister of civil aviation and the last prime minister under President Hosni Mubarak, to run in the 2014 presidential election. But when former Minister of Defense Abdel Fattah al-Sisi announced his candidacy, Shafiq refused to run and the movement ended. Now, posters are again filling the streets, calling on Shafiq to run in the parliamentary elections set for this year.

Shafiq ran in the 2012 presidential elections against Mohammed Morsi. When the race ended in the latter’s victory, Shafiq submitted a statement to the state prosecutors questioning the fairness of the elections and the possibility that the results were subject to fraud. Shafiq left Egypt for the United Arab Emirates on July 29, 2012, after Morsi’s victory and following accusations by a number of Muslim Brotherhood figures of squandering public money. To this day, he has yet to return to the country.

On Oct. 11, 2012, Morsi dismissed Attorney General Abdel Meguid Mahmoud (who had served in this position since the Mubarak era, before the January 2011 revolution) and appointed Talaat Abdullah in his place. Abdullah belongs to the “Judges for Egypt” movement, which is affiliated with the Muslim Brotherhood. Following his appointment, Abdullah opened investigations into the accusations that Shafiq wasted public money as minister of civil aviation in the Mubarak era, a case known in the media as the “Land of the Two Pilots.”

Despite the Egyptian judiciary acquitting Shafiq on Dec. 19, 2013, of all charges, his name has not been removed from the list of those monitored on arrival to Egypt and banned from traveling out of the country once there.

Yahya Qadri, Shafiq’s lawyer, told Al-Monitor that the decision to remove his client’s name from the watch list is awaiting the approval and signature of Attorney General Mahmoud Barakat (who succeeded Abdullah after Morsi’s 2013 ouster and the overthrow of the Brotherhood regime).

Habib told Al-Monitor that the “You’re the President” movement is calling for the return of Shafiq to Egypt and for his name to be removed from the list of those monitored on arrival and banned from travel, or for the judiciary to reveal the reasons that this decision has not been taken, despite his being cleared of all charges against him over a year ago.

Mahmoud Kabish, a law professor at Cairo University, told Al-Monitor that there is no Egyptian law that regulates adding or removing a name from the watch list. According to him, the constitution merely stipulates that such a decision must be based on a reasoned judicial order, even if there are no charges, for a specified period, in accordance with Article 62 of the current constitution.

Habib added, “We are also asking for action to be taken on the case involving [accusations of] fraud in the 2012 elections, which was filed by Shafiq. A ruling has yet to be issued in this case after three years, despite the fact that a number of cases later considered by the judiciary were decided upon.” Shafiq filed the lawsuit against the 2012 elections committee overseeing the election.

On her program “Egypt Against Terrorism,” broadcast on satellite channel Al Kahera Wal Nas, TV presenter Sahar Abdelrahman presented what she said was a copy of a letter sent by Hatem Bagato, secretary-general of the judicial committee overseeing the 2012 presidential elections, to Gen. Mohammed Hussein Tantawi, then-head of the Supreme Council of the Armed Forces (SCAF). The alleged document, dated June 20, 2012, said that the judicial committee saw it necessary to “take the decision that is correct and most beneficial for the country and its citizens, despite it being in violation of the law, and announce Dr. Mohammed Morsi president of Egypt. This is to spare the country of the bloody conflict that will inevitably occur in the event that Ahmed Shafiq is announced president … [or] to reject all pressure — whether internal or external — and announce the facts to the Egyptian and global public opinion, and reveal the defects and gross cases of manipulation and forgery that marred the electoral process as a whole. This is in addition to revealing the criminal pressures, practices and threats that the chairman and members of the committee, as well as their families, have faced.”

The SCAF assumed the duties of the presidency on a temporary basis from Feb. 11, 2011 (the date Mubarak stepped down), until July 1, 2012 (when Morsi assumed the presidency). Thousands of Morsi supporters held a sit-in June 18, 2012, in Tahrir Square before the election results were announced, and some Brotherhood leaders threatened to carry out violence in the event the electoral committee announced Shafiq as the winner. This is part of the threats and pressure referenced in the letter attributed to Bagato.

Newspapers also reported that some communication established between former US Secretary of State Hillary Clinton and Tantawi before the announcement that Morsi had won was aimed at putting pressure on Egyptian authorities to hand power over to Morsi.

Kabish told Al-Monitor that the case concerning fraud in the 2012 elections would not impact the existing political situation in any way (meaning that Sisi will remain president even if Shafiq does win the case), nor would it negate the legal and constitutional legitimacy of Sisi, even if a ruling was issued that Shafiq had in fact won the 2012 elections. He pointed out that the June 30, 2013, revolution abrogates the impact of any preceding events, and established legitimacy for the new ruling regime — that of Sisi — in accordance with the provisions of the current constitution. The latter was issued in 2014 and based on the demands of the June 30 revolution.

Speaking to Al-Monitor, Bahaa al-Maghawry, a professor of political science at Cairo University, said that Shafiq’s chances of winning the parliamentary elections and winning speakership of the parliament, or winning the premiership of the government to be formed by the parliament, are “strong because he has widespread popularity among citizens, parties and political forces.” However, in the same context, he added, “Despite all the respect he has and his previous accomplishments, his return to political life is unwanted due to his affiliation with the Mubarak regime. This could lead to angering the opponents of [the Mubarak] regime.”

Meanwhile, political analyst and director of the YAFA Center for Studies and Research, Rifaat al-Sayyed Ahmed, told Al-Monitor that Shafiq’s chances of winning a parliamentary seat are strong, but he believes his chance of winning speakership of parliament or premiership of the government formed by the parliamentary majority to be weak. “The selection of the speaker of parliament or the prime minister is up to the parliamentary majority. It is unlikely that the majority would choose Shafiq, given his affiliation with the Mubarak regime, since parliament has many members who are opponents of that regime,” he said.

Shafiq’s return could cause concern for judges from the 2012 elections committee, who include the most prominent figures of the Egyptian judiciary and former military leaders like Tantawi, as it would come amid increasing talks about reopening the discussion of fraud in the 2012 elections and rumors about their involvement. The matter is increasingly sensitive in light of the (repeated) accusations leveled by activists against the judiciary claiming the latter is politicized. This could be why Sisi made remarks at a June 3 news conference in Germany confirming that Morsi was the true winner of the 2012 elections.