Despite the SCAF’s ever tightening grip on key Egyptian political institutions, President Mohammed Morsi still has room to lay the groundwork for democracy, writes Yezid Sayigh. Morsi needs to both challenge the SCAF and forge a working relationship with any new parliament in order to consolidate meaningful civilian authority. 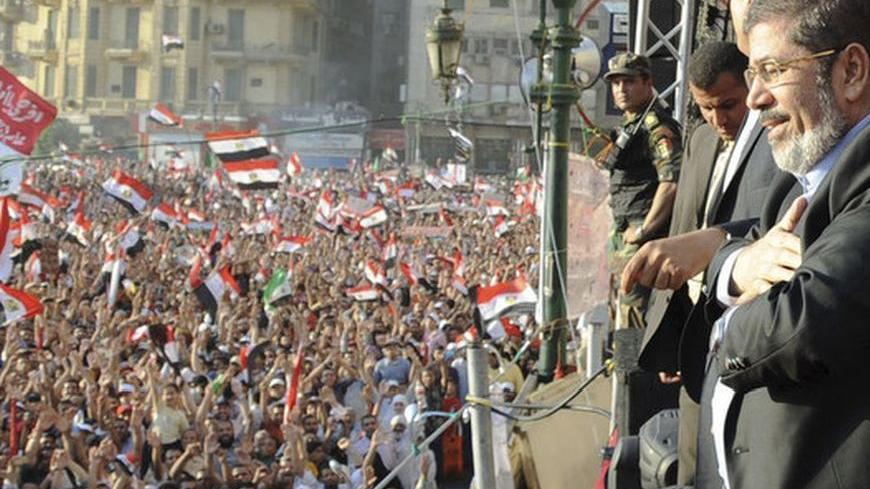 Muslim Brotherhood candidate Mohammad Morsi’s victory in the presidential election widens Egypt’s democratic opening by a crucial, if narrow, margin. But a long and difficult struggle lies ahead before democratically elected civilian leaders can assert meaningful authority over the country’s armed forces. Without this, future governments will lack the genuine autonomy to devise and implement policies, and will remain chronically unstable.

Yet former regime supporters, illiberal secular politicians, and even some liberal figures are confident that Morsi will last no more than a year, let alone a full four-year term. They further expect the ruling Supreme Council of the Armed Forces (SCAF) to manipulate the drafting of the new constitution and the election of a new parliament in the coming months so as to ensure that Morsi will be no more than an interim president. Should the SCAF succeed, Egypt will come under indefinite military custodianship.

The publication of the amended constitutional declaration by the SCAF on June 17, 2012, is telling of what lies ahead. For all intents and purposes, the SCAF pressed the “reset” button, cancelling all of the transitional arrangements, timetables and outcomes of the preceding sixteen months — except for the presidential elections. The SCAF also effectively decreed a second interim phase that will last for at least the first six months of Morsi’s presidency. Moreover, the SCAF acted unilaterally, without any attempt to consult the political parties or presidential candidates as it had done in the past. This underlines its special position as the most powerful political actor in Egypt, but also suggests that it believes it is approaching the endgame, and that it must start laying its cards on the table regarding the constitutional prerogatives and exceptional status it seeks to perpetuate.

The manner in which the SCAF has devised the second interim phase will award it two significant points of leverage over the coming process. First, the constitution must be ratified before the parliament — ordered dissolved by the Supreme Constitutional Court on June 14 — can be re-elected. Parliamentary leaders have applied to the State Administrative Court to reverse this decision, but if it stands, Morsi will be denied the support of an important political ally and major institutional player in shaping the new constitution. And without a parliament in session, it is unclear who now has the authority to confirm the next government: Morsi has the power to appoint the prime minister, but the SCAF will probably once more claim the right to confirm the council of ministers, further extending its power.

Second, the SCAF has awarded itself the right to object to any draft constitutional articles that are not to its liking, and refer them for a final decision to the Supreme Constitutional Court, which has so far been stacked in its favor. The terms of reference are extraordinarily vague, to the point of being meaningless; articles may be challenged on the grounds that they conflict with undefined “goals and basic principles of the revolution or of previous constitutions,” which on the face of it could encompass all of the constitutions of the Mubarak, socialist and monarchic eras. True, the amended constitutional declaration awards the same right of objection to Morsi, the prime minister, the Supreme Council of the Judiciary or any bloc comprising at least one-fifth of the constituent assembly that will draft the new constitution. But what matters most is that the SCAF has the power to significantly delay the entire process.

The SCAF is clearly in a powerful position. However, it faces a dilemma. It does not seek full replication of the authoritarian provisions of past constitutions, since it can no longer ensure that either a military man or a civilian ally will occupy the presidency in the future and wield his concentrated executive powers on its behalf. But by asserting its terms in advance, the SCAF has placed the question of civil-military relations squarely on the public agenda. It may eventually succeed in wresting from civilian authorities certain constitutional powers that would normally be afforded to them in a democratic system: the right to declare war, oversee and control the defense budget and US military assistance and appoint top commanders or approve major weapons procurements. But the SCAF will have greater difficulty openly challenging the right of Egypt’s new civilian authorities to roll back military penetration of local government, the civilian bureaucracy, state-owned commercial enterprises and other areas of the economy, the interior ministry and police and the Directorate of General Intelligence.

The SCAF also has a new challenger in Morsi. The amended constitutional declaration has trimmed his powers for the duration of the remaining interim period, however long that may turn out to be. However, he will doubtless convert the legitimacy conferred by his office into political advantage during the coming struggle to determine the shape of the new constitution. Once this constitution is ratified — no matter the balance of power it establishes between the presidency and parliament — Morsi can reasonably expect to work with parliament to consolidate meaningful civilian authority. This is unlikely to change much even if new parliamentary elections are held and the Muslim Brotherhood’s representation is reduced, since many of those who supported Morsi’s rival in the presidential election, former Prime Minister Ahmad Shafiq, do not seek the restoration of the old regime and may support democratic reforms in the future.

The SCAF will also not be able to delay ratification of a new constitution and the election of a new parliament — if this is decreed — indefinitely. The prerogatives and exceptions it seeks to enshrine in the new constitution place it above any civilian authority, but it is also keen to relinquish its direct role in governing. It is also keen to substitute sweeping military rule for more subtle military custodianship of the Egyptian state. To achieve this it will have to balance the residual sovereign powers it claims with the need to make substantive concessions to those pursuing meaningful civilian rule. While Egypt’s democratic transition is by no means guaranteed to deepen, the election results have created a space that Morsi and other political parties and players must seek to capitalize on.

Yezid Sayigh is a Senior Associate at the Carnegie Middle East Center in Beirut. This piece also appeared in Arabic in Al-Hayat.