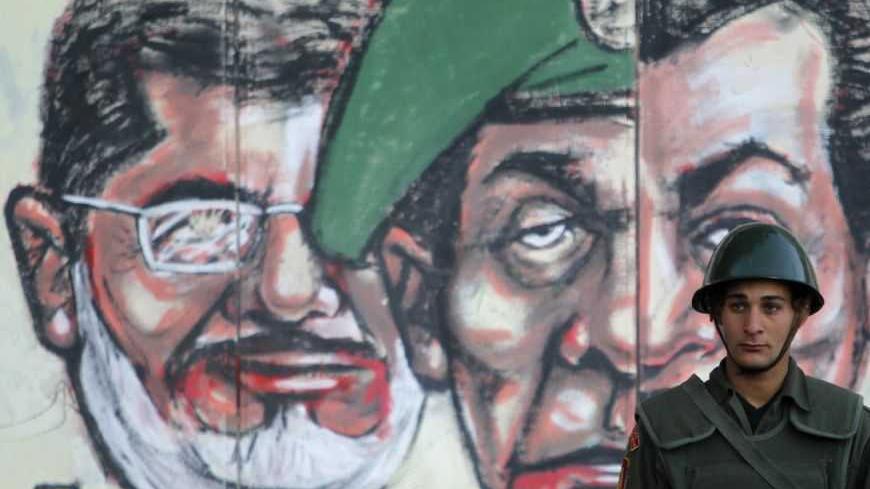 Six months into the presidency of Mohammed Morsi, Egypt’s new constitution has granted the Egyptian Armed Forces (EAF) greater autonomy and a more formal political role than they ever enjoyed under his predecessor, Hosni Mubarak. Morsi and the Islamist majority in the Constituent Assembly may have found it expedient to agree to the EAF’s terms in order to ensure the forces’ neutrality in the current phase of the country’s democratic transition, but this will prove costly.

Mammoth tasks lie ahead for Egypt’s new, democratically elected civilian authorities. They will need to change how the state-owned commercial sector and public enterprises work in order to unlock the national economy’s potential for sustained and equitable growth. The state’s massive civilian bureaucracy desperately needs sweeping administrative reform. And the civilian authorities will have to democratize and decentralize the country’s local government structure from top to bottom.

Self-perpetuating networks of retired EAF officers extensively permeate virtually all these sectors. If this deeply entrenched “officers’ republic” is confronted with a determined reform program, its resistance to Morsi and any cabinet that is appointed under his watch will likely stiffen, potentially bringing the country to a standstill.

Indeed, the cabinet of Prime Minister Hisham Qandil has already run into resistance as it seeks to get Egypt’s state apparatus back to work. Civil servants may not be politically or ideologically opposed to Egypt’s new authorities, but their initial ambivalence is reportedly turning into go-slow tactics and passive noncooperation with government directives.

The Ministry of Interior in particular has emerged as a principal holdout against Morsi. The police effectively remain on strike nearly two years after the uprising that ousted Mubarak. And various security agencies have adopted an attitude of sullen inaction in performing their normal functions and of passive hostility toward the transition process.

These are slow-moving trends. The EAF has not yet joined the other principal institutional sectors of the Egyptian state apparatus in a broad coalition against Morsi and his government. Nor does the EAF actively seek to block government policies and targets. But the prospect cannot be dismissed. The polarization of Egypt’s politics is already impeding the executive and legislative performance of the Qandil cabinet. The challenge of delivering on promises of improved public services and economic growth could become insurmountable if the cabinet is unable to preempt or dissipate bureaucratic resistance.

Unlike other parts of the state apparatus, the EAF sees itself as an autonomous institutional actor with a privileged political role. This was made evident on Dec. 11,  when Defense Minister Abdel-Fattah El-Sisi invited Morsi, cabinet ministers and a wide spectrum of “political parties and forces” and public figures to what he called a “social dialogue.” Although El-Sisi’s spokesperson insisted that this was not a “national political dialogue,” issuing the invitation was an unmistakably political act, undertaken unilaterally and without prior consultation with either the president or the head of the cabinet of which the defense minister is a part.

Morsi’s undisguised dismissal of El-Sisi’s invitation prompted the defense minister to cancel the proposed dialogue and to explain, through his deputy, that the EAF had no intention to interfere in politics and had merely sought “a gathering of an Egyptian family.”

The episode reveals much about the emerging balance between the EAF and the presidency as well as the nature of the understanding they reached ahead of December’s referendum on the draft constitution. The EAF has been allowed to maintain undiminished autonomy and retain long-standing prerogatives — even to increase them in certain respects. This was done to secure the EAF’s compliance as the Muslim Brotherhood, to which Morsi belongs, and its Islamist allies consolidate their governance of Egypt and steer the country through the next phases of its democratic transition.

But the price of compliance was high. It is relatively common in transitions to seek to soften the military establishment’s resistance to democratization by offering it the Defense Ministry. But the new Egyptian constitution formally requires that the minister of defense is an EAF officer. The defense budget will no longer be submitted to parliament as a one-line item for even nominal approval. Instead it will be approved by the National Defense Council — which will also be the only body to take even a cursory look at what the EAF does with U.S. military assistance worth $1.3 billion annually and at the EAF’s formal military economy.

The National Defense Council was originally created in 1971 by a weak new president, Anwar Sadat, as a means of containing the EAF and empowering himself. But it lapsed into almost complete inaction for the next forty years, until Egypt’s ruling Supreme Council of the Armed Forces revived it in June 2012, only two weeks ahead of the inauguration of Morsi’s presidency.

The new constitution incorporated much of the Supreme Council’s rulings. It reconfirmed the president as head of the council, but more significantly assigned eight out of its fifteen seats to EAF officers, granting them a permanent majority.

The National Defense Council effectively formalizes and institutionalizes the political role of the EAF. The constitution gives it responsibility for “matters pertaining to the methods of ensuring the safety and security of the country,” and it must be consulted before the president and parliament can declare war or deploy the armed forces outside Egypt. A National Security Council headed by the president and composed almost exclusively of civilians is also supposed to adopt “strategies for establishing security in the country.” But the National Defense Council clearly precludes full civilian oversight and authority over critical areas of policymaking, which include issues affecting public financial management and administration.

The Muslim Brotherhood’s detractors have repeatedly accused it of concluding a secret deal with the EAF to allow it to assume office. But Egypt is nothing like Sudan, for example, where a tight-knit alliance between the National Islamic Front and Gen. Omar al-Bashir reshaped state power as well as the legal and constitutional frameworks, and moreover purged non-Islamists from the military from 1989 onward.

In any case, the deal in Egypt is anything but comfortable. The Brotherhood and Morsi may interpret the constitutional provisions relating to the EAF as demarcating and separating the military and civilian spheres, as a precursor to asserting civilians’ political preeminence. But the formal autonomy granted to the EAF extends well beyond its own “professional” affairs — such as doctrine and arms procurement, or even the defense budget — and will be very hard to roll back in future.

This is not a challenge for Morsi and the Muslim Brotherhood alone, nor is it a problem only of their making. The transfer of power from military rulers to civilians always involves compromises backed by explicit and implicit understandings: whoever won last year’s parliamentary and presidential elections was going to have to grapple with the EAF’s privileged position. And with the exception of the Tahrir Square revolutionaries and Constitution Party head Mohamed ElBaradei, none of the principal political parties or presidential candidates since the ouster of Mubarak proposed curtailing the EAF’s prerogatives and immunities any further than Egypt’s new rulers have done.

The new constitution has secured the next phase of Egypt’s democratic transition by deferring major areas of contention to an indefinite future. The present Egyptian government, and its successors no matter what their political color, will struggle to deliver effective policies and needed reforms. Failure will erode their standing and legitimacy. Worse, it could undermine Egyptians’ belief in democratic transition and prepare the ground for future antidemocratic challenges.

Yezid Sayigh is a senior associate at the Carnegie Middle East Center in Beirut, Lebanon. 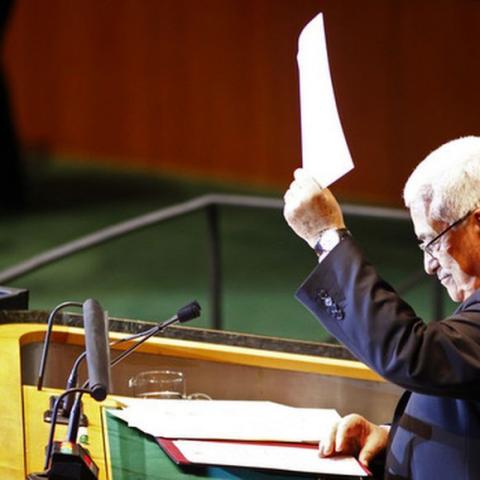 Palestine to Bid For Observer Status at UN General Assembly 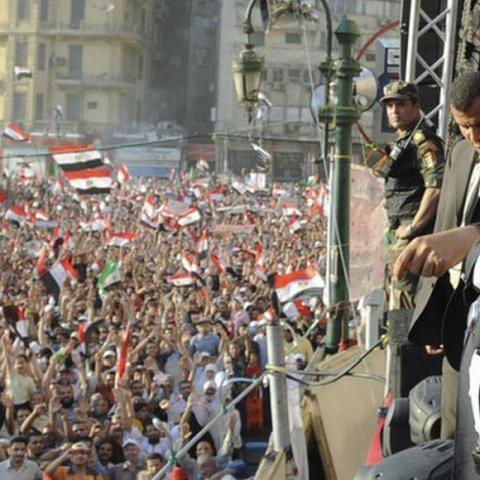 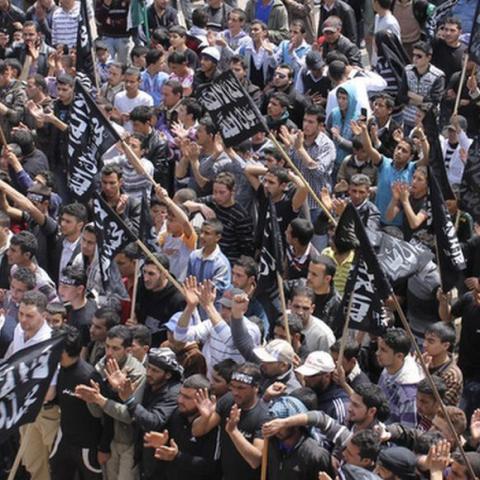