Millions are embracing Gen. Abdel Fattah al-Sisi, and have seemingly forgotten the ills of military rule that plagued Egypt for decades. 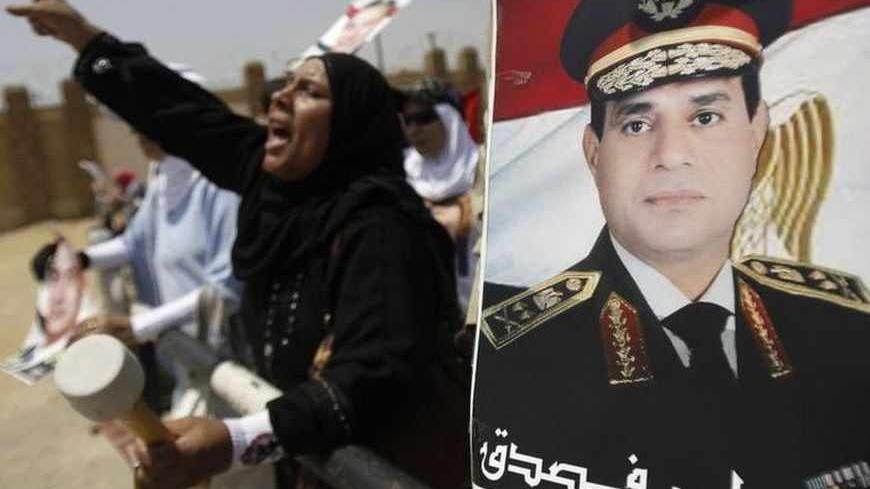 Egyptians once again find themselves stuck between two extremes: democratically elected incompetence verses a capable hand which risks receding the progress triggered by the Jan. 25 revolution. This is largely considered the main reason for Morsi's triumph against military-bred Ahmed Shaffiq in 2012 — and is the foundation upon which Sisi is creeping the army back to power a year later.

Dubbed "The New Nasser," Gen. Abdel Fattah al-Sisi's rise to stardom following his decision to oust Morsi on July 3 brought the army and police force back to the center of power which they had lost just one year before with the country's first democratic election.

Decisive actions and a carefully constructed image made him appeal to a population disillusioned by the failures of their first civilian government and seem willing to forget their antipathy towards a military that proved authoritarian and inefficient in handling the state under previous ruler, Field Marshall Hussein Tantawi.

In his latest speech, Defense Minister Sisi emphatically contrasted himself with the former civilian president, suggesting that much of Morsi's failure in governing the country was a direct result of his refusal to heed Sisi's warnings. The speech revealed a concerted campaign to paint himself — and any army official — as the only real option for a capable leader.

“I was meeting with religious leaders and I told them running a state is an extremely sensitive matter and he who becomes president must be a president to all Egyptians, not a select group,” explained Sisi to wild cheers from the audience.

And Egyptians seem to be lapping it up. Those across the political spectrum opposing Islamist rule have called him “the savior of the revolution” and have already launched a campaign calling on the defense minister to run for office.

“Egyptians are psychologically not ready for a civilian leader," explained Mohamed Soffar, professor of political science at Cairo University. “Morsi was seen as a weak pawn of the Muslim Brotherhood. But Sisi, with a clean slate and a familiar image in a sharp military uniform, appeals to a population that grew up under military rule.”

In backing Sisi and the military, millions of Egyptians have forgotten that the army under the authoritarian leadership of Tantawi held back the revolution’s goals through continuous military trials of activists and by placing itself above any legal accountability despite accusations of abuse by troops.

Daniel Alexander, a 58-year-old father who lost his son Marcus in the massacre of youth at Maspero in 2012 which involved Tantawi's forces, is just one example of such an alarming case of amnesia.

"I love the army because the army loves the people," he said, adding that he thought that the interior ministry was now "purified of corruption and abuse." "The armed forces are reborn again because of Nasser's son, El-Sisi," said Alexander.

To be fair, Morsi and his government failed in living up to promises they made. The Muslim Brotherhood’s insular approach to governing and dismal prioritization of party politics in a country on the brink of economic and social collapse made ousting him a necessary measure, but also made it easier for Sisi to sharpen the divide in his favor.

But this ineptitude was because of ex-president Mubarak's long reign of stifling political thought and education by banning the formation of other parties; leaving the only viable candidates those from SCAF and the only other party too stubborn to disappear, the Muslim Brotherhood.

Robert Springborg, professor of national security affairs at the Naval Postgraduate School in the United States, argues that the only way for democracy to succeed in Egypt is for there to be an established civilian political class.

“Unless and until the civilian political figures agree to appropriate constitutional and institutional provisions for democracy, the military will be able to divide and rule them,” he said.

Although the army and police enjoy widespread popularity among millions of Egyptians who demanded Morsi’s ouster, a select group of protesters and activists is refusing to be forced to choose between what they see as two sides of the same coin.

The protest movement, known as Third Square, emerged on Friday as activists gathered under the banner “No to the army and no to the Brotherhood.” They rejected the authoritarian rule of the army seen at the hands of Tantawi and Mubarak, and the elitism of the Brotherhood which failed to rally a coalition of politicians around it. Instead, these youth called for a return to the values of the Jan. 25 revolution, which demanded democratic process, better living standards and an end to corruption.

This group challenges the military's self-imposed role of "guarding Egypt against those who lead the nation down a dark tunnel” by establishing a civilian check that would hold the army accountable for any transgressions it made on the political process in pursuit of its own interests.

A good development, says Springborg, who argues that the military’s intervention into the political sphere smothers civil political development in favor of protecting their vast economic interests.

Advocates of the Third Square are not new. Among them are the protesters who began the movement that led to the ouster of a 30-year dictator, and who continued to demand for further changes even after Mubarak's fall, recognizing that he was only a figurehead and that the revolution was far from over. In the same way, these protesters are looking at the long-term consequences of accepting the military's intervention in politics.

"No to the Brotherhood and no to the military," said Abed Mahmoud, a member of the movement. "We want a civilian state governed by civilian leaders. We want to lead Egyptians to the awareness that their January 2011 revolution is not complete yet. We must dismantle the police state and army rule that thrived under Mubarak. We must reject the tyranny of Islamists who diverted away from the revolution’s goals. We need a new democracy in Egypt.”

Marwa Awad is a journalist based in Cairo.