Al-Monitor’s coverage and analysis of Egypt. 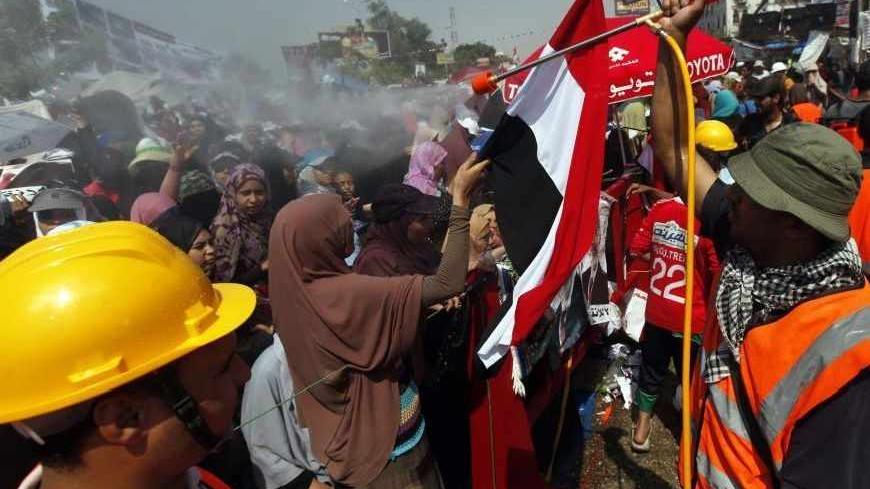 A man sprays water on supporters of deposed Egyptian President Mohammed Morsi as they shout slogans during a protest at Rabia al-Adawiya Square, where they are camping, in Cairo, Aug. 2, 2013. - REUTERS/Mohamed Abd El Ghany

Al-Monitor’s writers last week described a perilous and uncertain transition in Egypt, including an emerging Egyptian nationalism which is a mix of old, new and the unknown.  There appears to be little sympathy for the Muslim Brotherhood and deposed President Mohammed Morsi, but a growing concern about the role and direction of the military in the process.

Marwa Awad comments: “In backing Sisi and the military, millions of Egyptians have forgotten that the army under the authoritarian leadership of [Defense Minister Gen. Hussein] Tantawi held back the revolution’s goals through continuous military trials of activists and by placing itself above any legal accountability despite accusations of abuse by troops.”

Zenobia Azeem characterizes the secular parties’ alliance with the military with the Brotherhood as a “pact with the devil.” She writes: “There is a truth to be learned from the last two years: Whenever the military has felt threatened, it has exercised no restraint, violently subduing dissent. Every side in Egypt knows and has experienced this. The masses of people who have filled the streets, many of whom have traversed labels since the 2011 revolution — the revolutionaries, the pro-democracy demonstrators, the SCAF protesters, the Brotherhood protesters, the Islamists — have all had their blood shed on military orders. Yet, in spite of having witnessed each other’s downfalls, Egypt’s political factions still continue to deal with the devil, even though they, too, will likely suffer from the military’s heavy-handedness in the near future.”

Bassem Sabry describes how Egyptian secular parties are, in fact, becoming marginal to the changes which are shaping Egyptian politics and this new Egyptian identity: “The chances of real political reconciliation appear slimmer with each passing day. The continued violence and instability, which each side blames on the other, are further fueling public opinion against the Brotherhood while hardening the existentialist and standoff mindset within the pro-Morsi camp. The private media, which has completely embraced the new "war on terror" line, is pushing in the direction opposite reconciliation with the Brotherhood, which is now regularly referred to as "terrorist." Citizens calling talk shows regularly espouse this view of the Brotherhood and its supporters as "terrorists," and they often are clear in having no desire for reconciliation while calling for the decisive breaking up of the Rabia and al-Nahda square sit-ins at almost any cost.”

Wael Nawara provides the most comprehensive analysis to date of the strategy of the Muslim Brotherhood to turn Egypt’s struggle into what he calls a competition for corpses.  He writes: “The quarrel over legitimacy has been transformed into a race for corpses. The political battle has shifted from an electoral competition through the ballot box, into a competition between crowds filling the squares and, finally, a competition over the count of different types of boxes: coffins. If the players think that the winner shall be the party with the greatest number of corpses, it is not hard to see the bloody outcome of this deadly march.”

Madawi Al Rasheed  explains how the military takeover in Egypt, while backed by the Kingdom of Saudi Arabia, has also divided Saudi society.  She writes: “The Egyptian crisis continues to divide Saudi society after its elected president, Mohammed Morsi, was deposed by the military on … [July 3]. While the Saudi government made it clear that it supported the coup and rewarded Egypt with $5 billion, a disenfranchised society had different views on foreign policy. Three trends are discernible: One put its weight behind the Muslim Brotherhood, one sided with the government decision and one showed caution in celebrating the end of a short-lived democratic experiment. However, all were equally passionate about the crisis. Their heated passions may not have been about Egypt. To a large extent, Saudi responses clearly reflected a growing tension and polarization in Saudi Arabia itself.”

US ‘Back to the Future’ in Egypt

In an interview with The Washington Post’s Lally Weymouth, Gen. Abdel Fattah Al-Sisi, Egypt’s defense minister and deputy prime minister, said of the United States, “You turned your back on the Egyptians, and they won’t forget that. … Now you want to continue turning your backs on Egyptians?”

Sisi’s remarks reveal the magnitude of the US challenge in managing its relationship with Egypt during a fragile and uncertain transition.

Sisi’s tough words are especially striking, given that he speaks with US Defense Secretary Chuck Hagel “almost every day” and coming so soon after US Secretary of State John Kerry’s remarks to Pakistan’s Geo TV on Aug. 1 that the Egyptian “military did not take over. …In effect, they were restoring democracy.”

In exclusive interviews with Al-Monitor, two leading members of Congress generally agreed with Kerry that the military intervention has been a plus for Egypt’s democratic transition.

Rep. Mike Rogers, a Michigan Republican who chairs the House Permanent Select Committee on Intelligence, said, “We ought to continue to support the military as that one stable institution in Egypt that will bring about democracy, that is far more representative of the hopes and aspirations of Egyptians than what we found in the Muslim Brotherhood.”

New York Rep. Eliot Engel, the ranking Democrat on the House Foreign Affairs Committee, similarly said, “I think that whatever emerges from the military takeover will, in all likelihood, be better for Egypt than the direction that Morsi was taking his Muslim Brotherhood government, better for the region, and certainly better for the United States from a strategic point of view.”

Vali Nasr writes that US policy toward the Middle East is “Back to the Future” in its drift to a focus on containing Islamic extremism rather than supporting democracy:  “Washington is not ready to admit that, but by buying into the same argument in Egypt and standing back for Assad to defeat the opposition, it could signal that it is open to embracing a future for the Middle East in its past. First Egypt, then Syria, will be back in the corner of the containment of Islamism strategy, a destructive and dangerous dance between ruling dictatorships and extremist oppositions. In Egypt last month, the Arab Spring came full circle, and now US Middle East policy is poised to do the same.”

Geoffrey Aronson concurs that the US is adjusting to the consequences of the experiment in popular democracy’:  “Washington subsequently qualified its support for the democratic experiment it has so frequently lauded, in the process accommodating the determination of the deep state allied with a large proportion of Egypt’s civil society and political elite to substitute a megaphone for the ballot box. When tested, Obama voted for popular democracy, so why blame Sisi for assuming that whoever brings the most people into the street wins?”