US Uneasily Adjusts to 'New Egypt'

US Ambassador Anne Patterson had it right about the perils of "popular democracy." 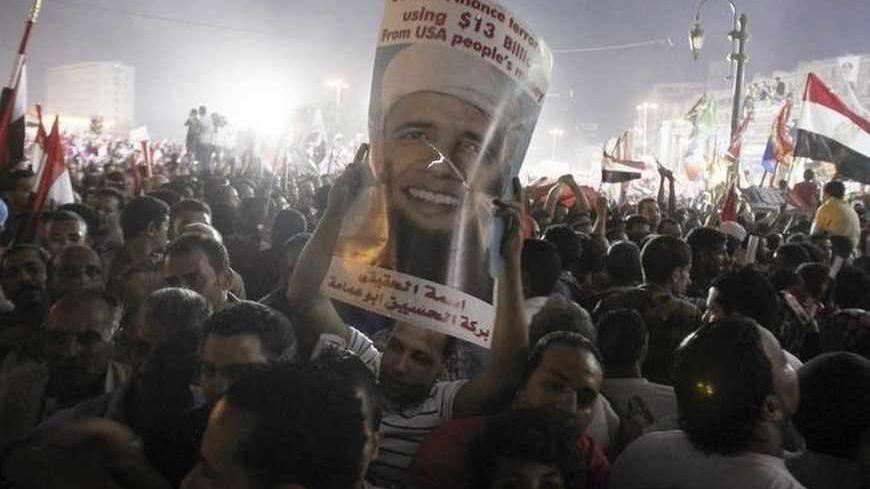 An Egyptian at Tahrir Square holds a poster depicting US President Barack Obama during a demonstration in Cairo, July 26, 2013. - REUTERS/Amr Abdallah Dalsh

Revolutions rarely empower those who make them. So it has been throughout history, and so may it be in Egypt as well. Under the leadership of a reinvigorated military establishment, Egypt is embarking on a path at odds with the uncertain promise of its brittle democratic revolution.

The Barack Obama administration is awkwardly and uneasily making its peace with this new Egypt, where the deep state is pushing aggressively against the fragile veneer of civilian rule that it has put in place. Anne Patterson, US ambassador to Egypt, has unfairly become a lightening rod for virtually everyone in Egypt and many in Washington unsatisfied with Egypt’s sorry predicament. In the months before Washington decided that President Mohammed Morsi’s ouster was not a coup, Patterson was an unspoken and unapologetic advocate of what must have seemed at the time to be an unremarkable and indisputable set of self-evident truths taken from the Obama administration’s standard democratic playbook.

She opposed Tamarod’s prescription of resolving Egypt’s ills by taking to the streets to recall the president. “Some say that street action will produce better results than elections,” she told a Cairo audience at the Ibn Khaldun Center on June 18. “To be honest, my government and I are deeply skeptical.”

These remarks received the most notice, but stronger statements made two months earlier also deserve close attention. At the Gezira Club on April 28 in Cairo, she argued against the overt return of the military to the public square. “I want to talk for a few minutes about how Egypt is doing nearly one year after the military handed over power to an elected civilian president,” she said to the audience. Patterson continued,

"That the handoff took place at all — following the first truly democratic presidential elections in Egypt’s history and without violence or bloodshed — was in itself remarkable. Peaceful transitions from military to civilian rule are very rare, and rarer still do they happen so quickly. It marked an auspicious start for Egypt, as this ancient land stepped tentatively into the new territory of real, participatory democracy, with all the trials and tribulations that followed.

" … The Egyptian military deserves a lot of credit for turning over the government to civilians and returning to its core mission of protecting the country. And, there is no going back, either to military rule — which the highly professional Egyptian military rejects — or to an authoritarian ruler who interferes in the daily life of Egyptians and curtails their freedoms. Let me be clear: a military intervention is not the answer, as some would claim. Neither the Egyptian military nor the Egyptian people will accept it as an outcome."

Recent events have conspired against this optimistic assessment. Certainly the US position on Egypt has become more complex as the revolution has continued to unfold. Until the coup that Patterson had warned against, the United States enjoyed the advantages of Egypt’s remarkable democratic experiment. For a while it appeared that the Muslim Brotherhood and the deep state, now led by Deputy Prime Minister and Minister of Defense Abdel Fattah al-Sisi, had entered into an uneasy but stable arrangement. As long as it held, Washington saw no reason, and was not pushed, to get out in front of developments.

That era is over. The two poles Washington had supported for the last year — Morsi’s election and the military — are now locked in a battle that has only just begun. Washington has to choose, and the options are not good.

The army, cheered on by part of the anti-Ikhwan establishment and a resurgent ancien regime, has embarked on a new and deeply troubling strategy. The deep state has been energized by new leadership, with Sisi able to mobilize public opinion in a way the septuagenarian general Mohammad Tantawi never could. He has the future in front of him. His appeal over the heads of the established political system for public support in a “war against terror” that recalls Mubarak-era campaigns, and those of Washington as well, betrays the new, emerging balance of forces, led by the army, which is besieging the Ikhwan on the one hand and demonstrating its power over the opposition on the other.

Where does this leave Washington? Strangely mute. After cultivating a political culture that prides itself on having an opinion about everything, the Obama administration has gone silent on the question of the legitimacy of Morsi’s ouster. Washington’s silence on this matter is deafening, particularly after its recent attempts to reinterpret its previously unqualified support for Egypt’s first free and fair presidential election in its history. Having walked back its support for Egypt’s elected president, Washington now makes urgent but plaintive requests for good behavior all around that hardly register in Cairo.

So, for example, US Secretary of State John Kerry has expressed Washington's “deep concern” about the bloodshed on July 27, in which scores were killed by security forces. Kerry also called on the authorities to “respect the right of peaceful assembly and freedom of expression,” bromides whose power has evaporated at the hands of an American administration all but immobilized by the contradictions in its policy exposed by Morsi’s ouster and the street violence that erupted in its wake.

Lest it be accused of standing idly by as Egypt burns, Washington has decided to delay delivery of some F-16s. This decision is a perfect example of what policymakers may think is the least offensive option available to defuse calls for more meaningful action. F-16s, however, are a symbol, not only of the long-standing security ties between Cairo and Washington, but also of the pride of place that Egypt has long enjoyed as a pillar of US-led regional security. Is Washington suggesting that notwithstanding its accommodation with Morsi’s ouster and his arrest, it is prepared to review its strategic relations with Cairo if Sisi oversteps an ill-defined redline?

The Obama administration is today without a lot of influence, tripped up by its own rhetoric, anxious to be on the right side of history but unable to predict the tortuous path that history is taking. When faced with the option of being true to its principles and institutions — the ones that Patterson so eloquently defended in the months before July — Washington betrayed its faith, not only in Morsi, but more important, in the institutions of democratic rule that however imperfect offer the best prospect for Egypt’s renewal.

“Even if you voted for others,” Patterson explained last April, “I don’t think the elected nature of this government is seriously in doubt. Throughout Egypt’s post-revolution series of elections, the United States took the position that we would work with whoever won elections that met international standards, and this is what we have done.”

That is, at least until the extraordinary events of July. Washington subsequently qualified its support for the democratic experiment it has so frequently lauded, in the process accommodating the determination of the deep state allied with a large proportion of Egypt’s civil society and political elite to substitute a megaphone for the ballot box. When tested, Obama voted for popular democracy, so why blame Sisi for assuming that whoever brings the most people into the street wins?