US Navigates Egypt’s Turmoil With Eye on Military Role

US influence is at the margins of yet another turn of events. 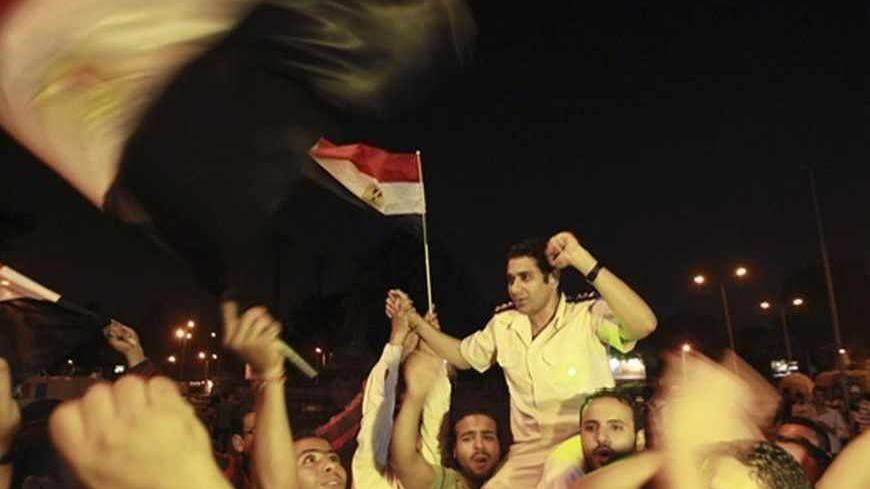 A policeman (C) cheers with protesters, who are against Egyptian President Mohammed Morsi, as they dance and react in front of the Republican Guard headquarters in Cairo, July 3, 2013. - REUTERS/Louafi Larbi

US officials are concerned about the ousting of Mohammed Morsi as president of Egypt, as well they should be.

Every day is a new day in Egypt, which is facing another dramatic crossroads of an ongoing popular revolution. But of all the upheavals that characterize the Arab Spring, the revolution in Egypt has been the most comfortable — both politically and intellectually — for the Obama administration.

As the confrontation deepens between the Muslim Brotherhood and the de facto alliance between the “deep state” run by the military establishment and the popular movement, Washington remains warily confident that its core interests — Cairo's strategic alliance with Washington, Egypt's commitment to peaceful relations and coordination with Israel, wrapped in a reassuring cocoon of democracy, even of the revolutionary kind — can survive this revolutionary environment and remain secure.

At the Pentagon, one official observed that US relations with Egypt are based on security cooperation with the United States and Israel — neither of which are seen to be in danger. The continuing centrality of the Egyptian military in Egyptian affairs has been and remains at the heart of this relatively benign reflection on developments in Egypt.

The Obama administration has all but mimicked the moves by Egypt's military leadership to position itself on the right side of the remarkable course of revolutionary developments in the last two years — supporting and then abandoning longtime ally former Egyptian President Hosni Mubarak, accommodating rule by the Supreme Council of the Armed Forces (SCAF), endorsing a series of ballots that culminated in the election of Morsi as president — and the subsequent ouster of Gen. Mohamed Hussein Tantawi and the agreed-upon eclipse of the SCAF. In the days leading up to Morsi's sacking, Washington advised the embattled president to revisit his election and his powers as president.

Because the most consistent slogan of the revolution has been “The army and the people are one,” Washington has been spared to make a terrible choice between the demands of its traditional national interest centered on the army and its support for the Egyptians' fickle democratic choice, whether expressed at the ballot box or today in the streets and squares across Egypt.

Constitutionally prescribed elections allowed Washington to support the free and fair election of the Muslim Brotherhood's Morsi as president while the extra-constitutional legitimacy created by popular protest offered US officials a comforting rationale for US President Barack Obama, in his call to Morsi, to advise the embattled president “to listen to the voice of the people,” demanding Morsi's ouster.

This peculiar characteristic of Egypt's version of the Arab Spring has enabled Washington to be on the side of the angels, true to both its ideals and interests and free from the need to make hard choices. Many would dispute this notion. Morsi's opponents have become disenchanted with Washington and its ability to accommodate to the rule of the now-fractured coalition of the Muslim Brotherhood and the military. The support for Morsi as Egypt’s elected president voiced until recently by outgoing Ambassador Anne Patterson marked her out for particular disdain among the losers of the democratic contest looking to blame anyone but themselves for their political failures. Washington's soft endorsement of core points of  the opposition's political agenda — an election redo led by opposition parties and supported by the heavy-but-veiled hand of the military — may well prompt a wary, positive change in opposition views of Obama's policies.

In recent months, there has been a growing chorus of criticism in Washington of central aspects of Morsi's rule. The US Congress was the source of demands to condition aid to Egypt on changes in Cairo's policy to nongovernmental organizations in particular. Morsi's mangling of the constitutional process also attracted criticism. There was familiar talk of sanctioning Cairo for breaches of what Washington defines as good behavior and rumblings from the policy community about the need to recast Washington's security relationship with Egypt in the new democratic environment. This agenda is remarkably similar to the one that dominated Washington's relations with Egypt during the last years of the Mubarak era, and so it was both familiar and manageable.

The revolution in Egypt has pushed this agenda aside. Of all its policy pronouncements this week, the White House has been most emphatic in its opposition to a military coup. Such an outcome would be too clear a contradiction of Washington's aspiration to support both democratization and the military that has been at the heart of US policy for the last two tumultuous years, and a choice Washington loathes to consider.

On this issue at least, Obama is pushing against an open door. Virtually none of the main Egyptian players — Gen. Abdel Fattah al-Sisi foremost among them — has a desire to embark on a classic military assumption of central administrative and executive power, and not because of any concern about the US reaction.

Washington's relationship with the “deep state” during the revolutionary era has been marked by an all but unspoken convergence of basic interests. Washington has never considered itself to be in a position to write a script for the generals or for any other Egyptian player to follow. Long gone are the days when CIA operative Kermit Roosevelt and others saw the Egyptian political system as their plaything, and not without good reason. Despite the tortuous developments since February 2011, Washington has demonstrated a remarkable ability to sit on its hands, content to observe rather than participate and certainly not to lead events.

This forbearance has suited the military leadership, which shares Washington's aversion to unvarnished military rule. The first point of Sisi's July 1 announcement insisted, “The armed forces will not interfere in the realm of politics or governance and will not overstep the role that it is assigned in a democracy, which stems from the desire of the people.”

In his televised statement today announcing Morsi's dismissal, Sisi continued to insist that the armed forces had no intention to enter political life, but said that the military would "never turn a blind eye to the aspirations of the Egyptian people."

The main elements of the all-powerful “road map” — the temporary suspension of the current constitution, appointing the head of Egypt's High Constitutional Court (HCC) to run the country until a new president is elected in yet to be determined presidential polls, formation of a government of technocrats, creation of a new parliamentary elections law, currently being reviewed by the HCC, and formation of a committee to amend controversial articles of the temporarily suspended constitution — may allow Egypt to define Sisi's actions as something other than a military coup, and thereby spare Washington the task of suspending aid as US law requires.

The Egyptian military sees itself as answering to a much higher calling than the concerns of the US ambassador or even the president of the United States. Until now it has retained the power to remain at the center of events and even to re-emerge — however reluctantly — as the most powerful arbiter among the competing players.  The red lines Sisi will follow have been drawn in Cairo, not in Washington.