US Spared Hard Choices in Egypt

Geoffrey Aronson analyzes how Washington can best manage US-Egypt relations given the challenges of dealing with President Mohammed Morsi’s government. 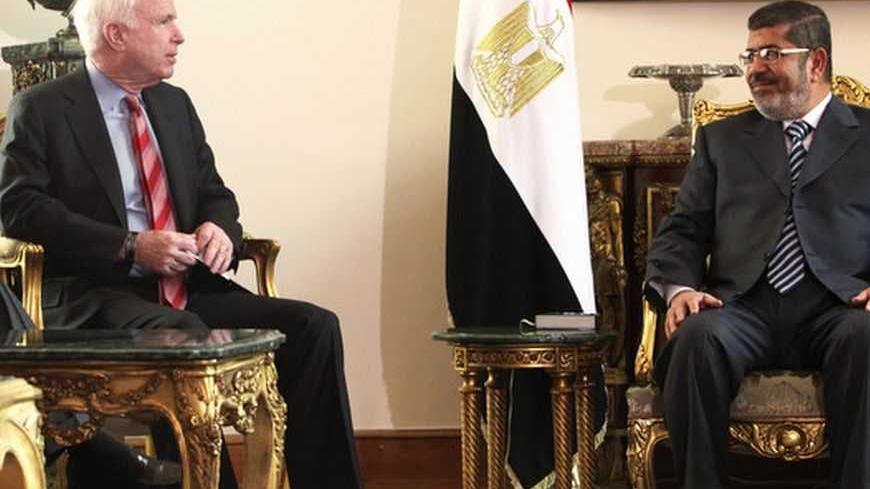 For decades, the United States has been locked in a race to the bottom with political Islam. The Iranian revolution established the zero-sum nature of the conflict between US interests and the empowerment in the Middle East of political parties claiming divine sanction for their policies. Algeria in the last decade of the 20th century and Palestine today stand as examples of Washington’s enduring enmity toward those who in the name of Islam successfully contest the old order, even by popular, democratic demand.

The Egyptian revolution has shattered this model. Two years after the ouster of President Hosni Mubarak, Washington is discovering that there just may be a way to live with political Islam.

The balance now being struck between the government led by Egyptian President Mohammed Morsi and the US administration of President Barack Obama remains tenuous. Every day is still a new day in Egypt. But Mubarak is gone, and in his place remains the popular and unavoidable prospect of revolutionary change. The character of Egyptian politics in the post-Mubarak era is becoming defined by the clash of institutions — courts, police and security — and competing tests of political power, often in the streets and too frequently violent. Two years of struggle and what seems to be constant polling have stopped Egypt far short of a revolution akin to Iran’s and the repudiation of ties with Washington that formed such a vital component of Iran’s revolutionary narrative. Egyptians have instead transformed what threatened to be a wholesale assault upon the old order into a struggle for the power to reform it and a chance to shape its successor.

The Obama administration should be able to live with the messy, chaotic style of Egyptian politics. It addresses Washington’s interest in incremental reform — removing the harsh edges of Egypt’s newly endorsed constitution, protecting women, improving the economy — while accommodating, and to some degree enhancing for Egyptian rather than American reasons, the power and prerogatives of the “deep state.”

Seen from Washington, if there were ever a major revolution in the Arab world, let alone in the most populous and significant country in the Arab world, Egypt today would stand as an illuminating example. Egypt has answered Washington’s call for democratic legitimacy, honored all too often in breach rather than execution, while at the same time enshrining the pillars of Washington’s security and economic interests — the towering role of Egypt’s military command, peace with Israel and an economic package endorsed by the IMF. And all this managed by the Brotherhood! This, in short, is not Nasser’s Egypt.

Those with long memories, however, will remember that Nasser and his Free Army Officers were once hailed in Washington in far more enthusiastic terms than the supportive reserve that has greeted Morsi’s rise to power. Washington in those days was in a revolutionary mood. It had tired of British preeminence in the region and those political forces — a corrupt and ineffectual Egyptian political class — upon whom London’s waning influence depended. Washington looked to the colonels to modernize Egypt and its military, and keep the twin bogeymen of communism and the mob at bay.

Today, both Washington and Cairo are managing to contain their differences. The US has called for Morsi’s immediate apology for his recently publicized rant against Jews and Zionists, while deflecting calls from Capitol Hill for harsher retribution. Morsi has lamely suggested that his remarks were taken out of context. His aides have reiterated Egypt’s commitment to religious freedom. The Middle East is a tough neighborhood with passions, prejudices and hatreds aplenty. It was Menachem Begin who, in the heat of battle in 1982, called Palestinians "beasts on two legs.”

The Obama administration has contained public criticisms and concern over the increasingly precarious position of the Multnational Force of Observers in Sinai and has surprised even itself by applauding the visit of Egypt’s prime minister to Hamas-ruled Gaza during the recent conflict. But in this as in all things related to Hamas, Washington is following a path blazed by Israel. Egypt too is proving less interested than many hoped or feared in adopting Hamas’ policy agenda — not because Morsi has any overriding interest in accommodating Israel or Washington but rather for his own raison d’etat. Ditto for improved relations with the Ayatollahs and with Hezbollah. As Ariel Sharon once observed, one sees things differently from the seat of power. The net result is a more effective dialogue on Hamas and a reaffirmation of the new Egypt’s interest in and commitment to working relations with Israel.

In the new Egypt, the US has been spared the need to make the hardest and costliest of decisions. The extraordinary nature of Egypt’s transformation has enabled Washington to support the revolution and the Egyptian deep state at the same time. It has championed electoral legitimacy and the recognized the power of Muslim Brotherhood without fear of contradiction. It has continued to send aid to Egypt without reduction, notwithstanding continuing concerns about shortcomings in Egypt’s domestic political and social norms. It remains committed to arm the Egyptian military, confident that the new political order in Egypt, however hostile to Israel, will not undermine the security system that Washington has constructed at tremendous cost over two generations.

The most severe tests of Washington's commitment to the still-unfolding rebirth of Egypt have yet to materialize. When they do, will Washington value above all the “stability” offered by the deep state over a messy and disfunctional democracy? Will it accommodate the exercise of power by an Islamist regime with a majority at the ballot box when that power challenges the foreign-policy prerogatives of Washington and its allies or Washington’s benign vision of domestic Egyptian politics? The ghost of John Foster Dulles may rise yet again.