The decision of Gen. Abdel Fattah al-Sisi to run for president will have far-reaching consequences for Egypt. 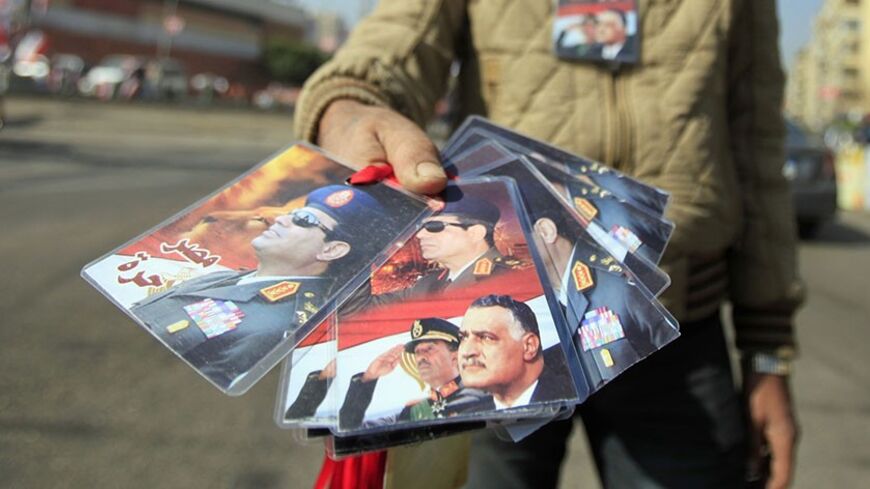 For a couple of weeks after the July 3 military ouster of Egypt’s President Mohammed Morsi, it seemed as though Gen. Abdel Fattah al-Sisi might turn out to be another field marshal Mohamed Hussein Tantawi. With the Supreme Council of the Armed Forces (SCAF) backing him to run for the presidency, Sisi has shown himself to be quite different from Tantawi.

His choices taken thus far already have lasting, far-reaching consequences for Egypt. Egypt observers agree that should he run, he is likely to win the presidency, and it is dubious that a strong parliament will emerge this year to check his authority. Political polarization is set to continue, and the repercussions for Egypt may be dire.

Shortly after July 3, Sisi's popularity turned into public outcries of support, which were promptly described as "Sisi-mania." Reports of phone calls between US Secretary of Defense Chuck Hagel and Sisi did not seem encouraging, suggesting a military officer who was convinced he had a historical role to play. When he called for a "mandate" to fight terrorism, Sisi evoked the image of a 21st century Nasser rather than a new Tantawi, with Morsi substituting for Hosni Mubarak.

Since then, very few have been confused or surprised by the defense minister's rationale. It seems, indeed, that Sisi believes he is on a "mission" that goes beyond the expected one of even an Egyptian military general. Unlike Tantawi, however, whose overreaching into the formal executive during his 18 months in power post-Mubarak was not met with the military’s approval, Sisi has no such obstacle to be concerned with.

On Jan. 27, the military leadership promoted him from general to field marshal — a clear indication of the top brass’ satisfaction with not only Sisi’s conduct thus far but also signaling its full support for the path he is about to embark on.

Few believe any opponent could beat Sisi in a presidential election, should he run. On the contrary, previous analysis suggested that Sisi’s endorsement would be necessary to run a successful presidential campaign — Sisi running himself would seem to indicate he has as good as won. There need not be widespread electoral fraud for that to take place. The field marshal genuinely has sufficient populist support to count on, and he has the backing of a network of interests that could see him win in the first round of any election, without the need for a runoff.

The fairness of those elections is likely to be highly questionable, as it is unlikely that alternative candidates would receive much media exposure, whether public or private. Indeed, if the constitutional referendum is something to go by, one can expect there to be suppression of alternative, dissident voices.

The next step on Egypt’s road map would be parliament. Had parliamentary elections taken place first, legislative authority would most likely have been split between an elected House of Representatives and a nonelected interim president in the person of Adly Mansour. With the order now switched, an elected president will enjoy executive and legislative power.

One could hope that an elected parliament might then act as a check and balance of that power. However, it is entirely likely that by the time parliamentary candidates have been voted on, a new electoral alliance would have been formed on the ticket of "supporting" a Sisi presidency. In this political climate, it is not inconceivable that such an alliance, if supported by the same networks that now support Sisi's presidential candidacy, could sweep parliament.

Part of this will depend on whether or not there is an electoral law that favors party lists as opposed to individual candidate lists. But either way, in this environment it is unlikely there will be a parliament that will act as an effect check on such a presidency. That might have been very different had the field marshal not decided to run for the presidency.

Continued tension with the Muslim Brotherhood

Finally, a Sisi presidency will delay any chance at political accommodation with the minority of Egyptians who back Morsi, or the Muslim Brotherhood. As defense minister, Sisi was recognized as the power behind the cabinet that took the decision to forcefully disperse the pro-Morsi sit-ins, leading to what Human Rights Watch called "the most serious incident of mass unlawful killings in modern Egyptian history."

There is little or no prospect of the Muslim Brotherhood coming to an arrangement with Sisi in the role of president, whether Sisi even wanted to entertain such a possibility, which seems improbable. The continuation of deep polarization in Egyptian society would seem to be a cycle difficult to break with Sisi as president — if anything, it seems likely to become a fixture of the Egyptian political arena for quite some time to come. This might be different if the field marshal decided to back another candidate, rather than run himself.

The international community has been hoping for a break in the zero-sum political brinkmanship that has characterized Egyptian politics for most of the past nine months. A Sisi candidacy will not see that hope realized, to put it lightly. On the contrary, it will make the forthcoming period a difficult one.

What the international community can do to affect that period in a positive way is difficult to imagine at present. Many of the world’s powers were willing to give Morsi’s ouster a wide breadth, recognizing his unpopularity and the firm support the military has in the country. The defense minister becoming president, however, is probably not what they had in mind. But it looks like it will be precisely that — and Egypt’s political arena will be none too easy to deal with as a result.