Al-Monitor’s coverage of the coup in Egypt. 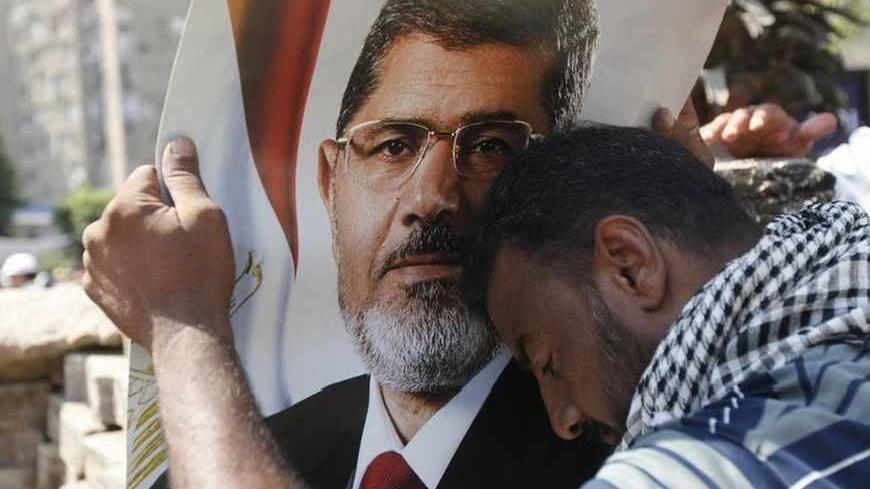 A poster of deposed Egyptian President Mohammed Morsi is pasted on boxes of dates at a vendor's stall near Raba El-Adwyia square in Cairo, where his supporters are camping, July 7, 2013. - REUTERS/Khaled Abdullah

The ouster of Egyptian President Mohammed Morsi by a military coup on July 3 is a double failure: a failure of governance by Morsi and the Muslim Brotherhood, and a failure for Egypt’s uncertain democratic transition.

Bassem Sabry, an advocate of democracy and national reconciliation, in a searching and profound essay describes how it “became more and more apparent that the Brotherhood was intent not on building a democratic administration but a new regime.”

Sabry describes Morsi’s dictatorial approach to the constitutional process; the assault on the separation of powers; the crackdown on the media; the appointment of political cronies; the marginalization of the Christian community and more, concluding: “This was a popular and genuine uprising against Morsi. These were undeniably the largest ever and the most self-driven protests in Egypt's history. Nonetheless, the role of the military and its actions surely give us cause for concern, and what became of the first civilian and democratically elected president is troubling. I wish all of this was different, and it would have been better for Egypt. The current transition has to move wisely, but quickly. Inclusion and civil cohesion must become the cornerstone of this process. Right now, I am of greater worry than I was in February 2011.”

Wael Nawara, co-founder of Al Dostor Party, the National Association for Change and El Ghad Party, argues that Morsi’s policies were an assault on Egyptian culture:

“It's not the economy, stupid. It is not just about the fuel shortages, power outages, deteriorating economy or soaring prices. Western media rarely, if ever, mention the Muslim Brotherhood's assault on Egyptian identity, culture and way of life as a core cause of protests. Could something so intangible motivate such massive demonstrations?

The reality is that culture is much more tangible than one may think at first glance. Restrictive cultural policies affect education, art, newspapers, television programs, books, academia, laws, dress, food and beverages, sports, management of antiquities and cultural heritage, tourism and public holidays. These are tangible things that impact people’s daily lives. When experiencing an abrupt change in aspects related to their self-image or the way their children are being brought up, people may panic and react quite strongly. Egypt might be experiencing one of these instances more than anything else.”

Zenobia Azeem writes that so far what we see in Egypt is little more than winner’s justice, and a worrying setback for democracy:

“If this is truthfully a continuation of the revolution, and not just an attack on the vilified Brotherhood, where are the continued cries demanding protection of human rights, rule of law, political freedom and political pluralism? The military is arresting Muslim Brotherhood figures, the army is firing on Brotherhood protesters, Islamist media is prevented from airing and the constitution remains suspended. The spokesman for the June 30 front, Mohamed ElBaradei, who is expected to take a key role in the interim government, justified these actions in a July 4 New York Times interview indicative of the exclusionary, hypocritical and complacent attitude that is so far defining this transition.”

Mohannad Sabry, who has been a leader in covering the rise of Islamist parties and deteriorating security in the Sinai, writes for Al-Monitor how the Sinai’s political divisions have been a catalyst for further violence.

“It is ironic that a regime that prides itself on ruling according to divine law fears most the rise of Islamism to power. It must be said that like most Western governments, Saudi Arabia was more than comfortable coexisting with the Egyptian military dictatorship under deposed President Hosni Mubarak. But when a democratically elected Muslim Brotherhood president was sworn into office in 2012, Riyadh was alarmed. Saudi Arabia had always had a troubled relationship with the Muslim Brotherhood version of Islamism, its organizational capacity and its increasingly accepted message that combined Islam with an eagerness to engage with the democratic process.”

Both Hazem Balousha and Daoud Kuttab explain how the loss of Morsi is a blow to Hamas’ regional alliances. Semih Ediz and Kadri Gursel describe how the government of Turkish Prime Minister Recep Tayyip Erdogan has also been forced to rethink its regional strategy in light of the coup, and what it all means for the Turkish “model.”

A statement by US Secretary of State John Kerry on July 6 called for a “transparent and inclusive democratic process with participation from all sides and all political parties,” while referring to what is happening as “the ongoing transition” — avoiding the word “coup” — which could require restrictions on US military aid to Egypt.

The United States is left, once again, on the margins of change in Egypt, as Geoffrey Aronson writes, with no chance for credit but plenty of blame from critics and protesters, as Egypt remains at the beginning of an uncertain transition.

It is worth recalling what Jamal Daniel, founder and chairman of the board of Al-Monitor, wrote in The Houston Chronicle in June 2011 — four months after Mubarak was toppled and one year before Morsi was elected — about the urgent need for a new democratic compact between citizen and state in Egypt and throughout the region in the wake of the Arab Spring: “Failure by anyone involved — the West, Israel, new or surviving regimes — to afford the region the fulfillment of its needs will lead to a prolonged period of instability if not the outbreak of a major regional conflict. It is already clear in Egypt that the removal of an authoritarian figure has not, thus far, led to a dramatic shift in the relationship between the government (still dominated by the military) and the Egyptian people. Further, the surviving or new regimes will need to align with one another to withstand the inevitable waves of new protests that are bound to emerge when government reforms do not immediately lead to mass economic improvement.”