Egypt’s 2012 presidential candidates: Where are they now?

The 2012 presidential elections showcased a diverse selection of candidates from across Egypt’s political spectrum, but this time around, the field has narrowed. 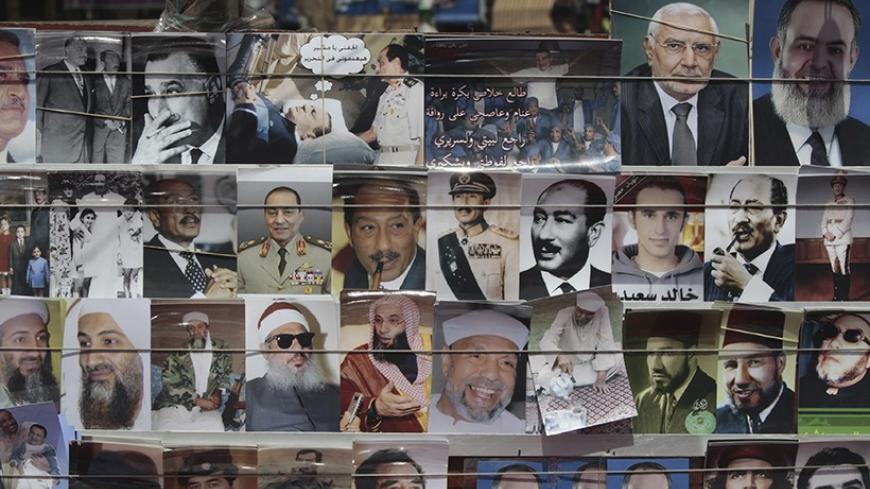 In 2012, 13 candidates competed in the first round of Egypt's presidential election. In retrospect, the race offered the most diverse political palette yet. Turnout saw a drop of over 20% from the parliamentary elections just months earlier, yet the variety of candidates offered insight into what Egyptians identify with and what they are willing to sacrifice or accept when facing tough choices. The second round was a nightmare scenario for the majority, who had to choose between the extremes of each camp: pro-state and Islamist. Two years later, the political space and appetite shrunk to only allow two candidates. The top five of the 2012 race are still involved, but their views and whereabouts sketch a different political scene for today.

In the 2012 elections, the head of the Muslim Brotherhood’s Freedom and Justice Party came in first with 5.7 million votes (24.7%), which increased to 13.2 million (51.7%) in the runoff for Egypt’s first elected president after the January 25 Revolution. His constitutional declaration in November 2012, seen as an undemocratic power grab, cost him almost all non-Islamist allies. The country’s package of economic problems, together with fears of increased Islamic influence in society, were the last straw. On the first anniversary of Morsi's presidency, mass protests called for early elections. Three days later, on July 3, Abdel Fattah al-Sisi, the defense minister he had appointed and the man expected to win the race this month, ousted him.

Current position: His first public appearance following months of incommunicado detention was Nov. 4, for the first of three trials — inciting murder and torture, jailbreaking and espionage — he describes as farcical. He went from president of the republic to a soundproof glass booth in court, his microphone muted whenever the judge finds him disruptive.

"I am Dr. Mohammed Morsi, the president of the republic," he said in court during one of his numerous statements. "The coup is a crime and … treason."

Influence today: Morsi's supporters haven’t stopped protesting since July, despite a deadly security crackdown. Despite the posters and chants calling to reinstate him, the battle has surpassed him. Some analysts detect a fissure within the Brotherhood ranks and speculate that the leaders abroad or in prison might not have full control over the youth facing the deadly crackdown. This lack of cohesion could prove detrimental to any possible deals or reconciliation the state could offer the group. Speculation abounds on the vote of the Islamist constituency, but the real question is whether the use of violence could be stopped.

Despite allegations of connections between the Muslim Brotherhood and radical Islamist groups, the outcome of Morsi’s trial will have little bearing on these groups waging attacks against the army, as they seem to be pursuing their own agendas beyond Morsi and the Brotherhood.

The last prime minister appointed by deposed President Hosni Mubarak before his ouster in February 2011 couldn’t shake off the association with the old regime. Instead, the former air force general embraced his background and relied on the pro-state, pro-stability sector in the first round of the elections to get 5.5 million votes (23.6%) and benefited from the anti-Islamist sentiment in the second round against Morsi, taking 12.3 million votes (48.2%). Corruption accusations and political feuds led him to flee the country, and he has been living in the United Arab Emirates since June 2012. For the most part he has kept a low profile and made few public statements.

Current position: In an audio recording leaked in March, he described the upcoming elections as a farce, saying he wouldn’t run because the ballot boxes would be stuffed for Sisi. The leaks support the theory that Shafiq hasn’t returned to Egypt after Morsi’s ouster because of a rift with the current regime. He did, however, declare his support for Sisi’s presidential bid, saying he didn’t run out of a belief “in the absolute priority of unity.” Some of those who worked on his campaign are offering logistical support to Sisi.

Influence today: Shafiq had used the network of Mubarak’s National Democratic Party, the biggest elections machine in the country. In some circles in Egypt, he’s still perceived as the true winner of the 2012 election or at least a hero in exile. This perception isn't worth much, however, in the face of someone like Sisi, since both share the same attributes that appeal to a base inclined to support statesmen with a military background.

Sabahi benefited from a pro-revolution and anti-Islamist inclination to win 4.8 million votes (20.7%), landing him in a surprise third place as the main leader of the National Salvation Front (NSF), the coalition of opposition parties and figures against Morsi.

Current position: He is a vocal supporter of the June 30 protests and the Tamarod campaign that benefited from the resources and network of his Popular Current group. He is also critical of the way security forces have been running the country. He has vowed to amend the notorious protest law issued in November and to release all prisoners convicted under it. At a May 5 rally in Mahalla, he told dozens of supporters the elections weren’t a done deal, rebuffing accusations from his potential pro-revolution constituency that he is legitimizing a fraudulent process.

Influence today: After the election results were announced in June 2012, he experienced a tumultuous welcome in Tahrir Square, where he was carried on shoulders and surrounded by adoring thousands. It’s unlikely that he can replicate the same success in 2014. Some of his most vocal supporters have either become too close to the military or work with his rival's campaign in one capacity or another. Nothing made this more clear than a photo of his grinning former Kefaya Movement colleagues and leftist politicians meeting Sisi in April.

The two main pillars of his campaign have been undermined. The late President Gamal Abdel Nasser’s legacy is claimed by Sisi. Banking on the pro-revolution vote is the only platform that would distinguish Sabahi, but the idea of the revolution has taken some of its severest hits in the past few months as many losing faith in it. His only chance is to convince those intent on boycotting that more votes for him would open up space for the opposition later on.

Banking on a moderate Islamist platform, the former Brotherhood member was one of the 2012 front-runners, leading pre-election polls along with Amr Moussa and ultimately winning 4 million votes (17.4%). They were the only candidates to take part in a public debate, which was blamed for taking them both down. Egypt is unlikely to see another presidential debate this year.

Current position: As early as June 5, 2012, he said he wouldn’t run again. He established the Strong Egypt Party, which has reiterated his stance and rejected Sisi’s bid. He supported the mass demonstrations of June 30, but labels the military removal of Morsi three days later as a coup. In February, he said any candidate that would take part in elections in which Sisi runs would be a “prop.”

Influence today: His statements have fomented confusion about his beliefs: whether he’s trying to appease all sides by making contradictory statements, or if he’s a voice of reason at a time of extreme polarization. He can’t dissociate himself from his Muslim Brotherhood background despite criticizing Morsi. He and his party seem stranded, unable to get substantial support from Islamist or secular camps.

Very few expected the seasoned diplomat to come in fifth with only 2.5 million votes (11.3%). Like Abul Fotouh, his loss is blamed on a lack of clarity. He was seen as the candidate of the old regime who tried to court pro-revolution sentiments.

Current position: Moussa has thrown his weight behind Sisi. The former foreign minister and Arab League chief was one of the top politicians headlining the NSF. He chaired the committee that wrote the new constitution in 2013. In December, he said that if Sisi decided not to run for the presidency, “We will make him run.”

Influence today: When information about the minister of defense’s resignation and presidential bid was lacking, Moussa was the media’s reliable source. He now heads the advisory board working on Sisi’s electoral campaign. Aside from Moussa’s diplomatic expertise and clout, there is no gauge of what else he brings to the campaign. The political party he founded, Al-Moatamar (Conference) Party, and some of his 2012 campaign members are now part of Sisi’s campaign. But the party is yet to be tested in a challenge that would reveal the strength of its network and logistical expertise.