While Egypt's elections and trajectory might seem settled, there are still ways for something remarkable to happen. 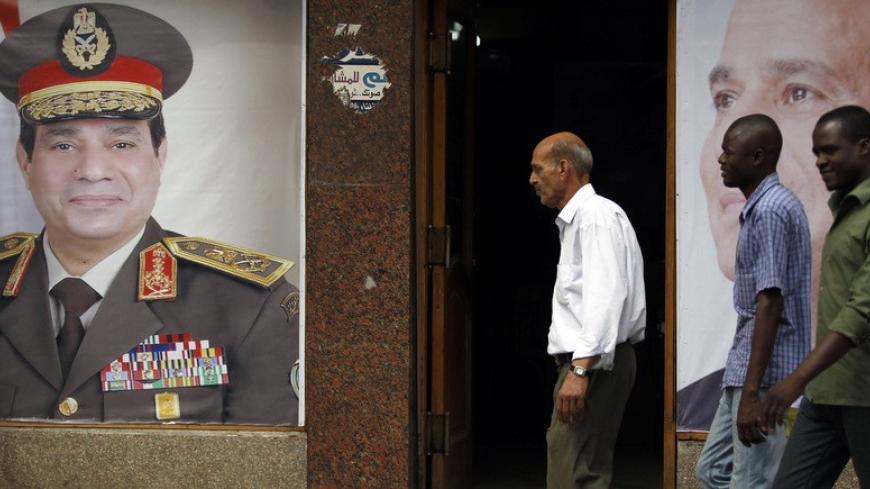 Two years ago Egypt stunningly experienced its first truly free, competitive presidential elections. They managed to somehow be as exciting as they were nerve-racking (and painfully hard to predict), not only for Egypt and the region but internationally.

Candidates represented the breadth of the political spectrum. There was the old guard, such as former intelligence chief Omar Suleiman (who suffered a highly questionable last-minute disqualification), former Mubarak Prime Minister Ahmed Shafiq and — the presumptive winner at the time — Mubarak former Foreign Minister and former Arab League Secretary-General Amr Moussa. There were Islamists, including the more extreme Salafist Hazem Abu Ismail (also disqualified to the relieved sigh of many), the Muslim Brotherhood’s Mohammed Morsi and more moderate figures like lawyer and “Islamic thinker” Selim el-Awwa. On the secular revolutionary front there were candidates such as Nasserist Hamdeen Sabahi, rights and labor lawyer Khaled Ali and leftist Abul-Ezz el-Hariri. Abdel-Moneim Aboul-Fotouh, a former Brotherhood leader, tried to run on a nonideological national unity platform and ran a unique campaign that managed to rally a wide diversity of figures behind him.

Each of these candidates ran heated campaigns, their platforms unabashedly sparred. Some scrambled on the ground toward grassroots campaigns to get the needed 25,000 proxies, others relied on official party endorsements or member of parliament support, as per the options for becoming a candidate present in the constitutional declaration at the time. Public figures were substantially divided in endorsing the different candidates. When the runoff stunningly became between Morsi and Shafiq, the entire nation came to a standstill, followed by the most dramatic showdown in which Morsi won. The victory was only made possible through a coalition of multi-ideological revolutionary forces that backed him with (predominantly) varying degrees of nonexcitement rather than his opponent, who was seen as the objectionable face of the past. Non-Islamists who voted for Morsi in the runoffs satirically referred to the act as the “squeezing of the lemons,” a reference to squeezing lemon juice over bitter food to make it more palatable.

By the end of the elections, many of these campaigns had launched into full-fledged political parties and movements, a vibrant political space further sprung into life.

Today, regardless of whether one supports or stands against the current political order in Egypt established since Morsi's ouster last year, the image is starkly different. Morsi is in jail, the Brotherhood — once seemingly unshakable from power — has become a pariah, an illegal entity and the subject of a heavy crackdown. As for the presidential elections, only two candidates officially stand in what will become a single-round election. One candidate, Abdel Fattah al-Sisi, is expected to win in a landslide. Behind him is large public support, strong financial backing, a vast multitude of public figure endorsements (including figures associated with the revolution and the anti-Mubarak movement, in addition to some former endorsers of his current opponent) and some anticipated degree of support from the state bureaucracy and the security apparatuses. Sisi submitted 188,000 official endorsement documents to the High Election Commission, substantially more than the required 25,000.

On the other side, one opponent after another decided not to run, either in opposition to the current political process or in support of Sisi. Sabahi in some ways looks like a David in front of Sisi's Goliath. Sabahi, who came in a close and surprising third place in the 2012 elections, turned some heads when he decided to run — supposedly under pressure from the Popular Current youth base — despite earlier indications that he would not do so if Sisi ran. His campaign seems to be struggling financially and in generating the same kind of buzz as in 2012. His calls for a debate with Sisi are being ignored, and the Sisi campaign is tactically right in doing so.

Many Sisi supporters and the more radical supporters of the revolution both attacked Sabahi for running at first, with the first obviously believing that Sisi was the only suitable man for the times and the latter believing that the entire elections are an "orchestrated charade" that needed to be boycotted and "exposed." Within the conspiracy-theory-encouraging environment in the country now, some even went so far as to claim that Sabahi was running a fake campaign at Sisi's request to make sure the elections look “OK” for Sisi, and not literally a single-name referendum on the former defense chief. When it became obvious that would look bad for Sisi, some of that first camp gradually became more positive toward Sabahi, remarkably praising his decision to run as “patriotic,” while again stating he had no chance of winning.

Since the onset of the official date for candidate applications, Sabahi has done quite a few TV appearances and interviews, and yet Sisi did none (except, remarkably, a recent interview with Fox News). Knowing that Sisi essentially needs to glide to the finish line without stoking controversy, his campaign has focused on controlled news releases and events to the media. Of course, another reason is that there is some real danger on Sisi’s life, and thus a more traditional campaign national movement routine is going to be quite the difficult matter. Nonetheless, especially as the campaigns officially begin in early May, Sisi will have to make himself more visible.

One result: The latest Baseera poll from March said that while those planning to vote for Sisi declined from 51% in February to 39% in March, a staggering 59% were undecided, while 1% were divided between Sabahi and Aboul-Fotouh, with the latter being a non-candidate. A wider figure: 84% of the populace plans to vote, while 16% lean toward boycotting (roughly corresponding to what I reckon to be the ratio of the dedicated Islamist base).

Sabahi, who reportedly struggled to get over 30,000 endorsement documents in this different political climate as well as allegations of bias toward the Sisi campaign, isn’t thus far appearing to be picking up steam ahead of the elections. Remarkably, the only major parties that have backed Sabahi thus far are the Dostour Party and the Popular Socialist Alliance Party, while even much of the Nasserist movement — Sabahi’s traditional playground — seems to be gravitating toward Sisi. Sabahi likely understands his odds. He's also poised to face the challenge of trying to balance the often mutually exclusive acts of pleasing his base and likely voters, which are on the more radical and pro-revolution side, and trying to appeal to the mainstream if he is to have a chance at a decent final result. The worst potential result for him, of course, is Sabahi losing both, potentially irrevocably, for not managing to sufficiently appeal to either.

Can something remarkable still come out of these elections, or is Egypt merely waiting for an inevitable coronation and, as many worry, the entry into an era that at least shares a bit too many resemblances to the Mubarak days?

Taking the Brotherhood out of the equation for a moment, especially as they are likely to boycott, something remarkable could still take place in three ways:

• The first could, at least in theory, be within the Sisi campaign itself. There are some indications that Sisi himself truly does not want to be viewed as the face of regression to the past, and his campaign does feature a number of reformist figures. This, combined with more challenging living conditions and an impatient public that has become harder to appease through mere rhetoric, as well as a still more vibrant public expression space, could put pressure on Sisi to not follow the same formulas of the past, at least to some degree, and also — more immediately — push the Sisi campaign to finally truly begin speaking up on how it plans to deal with the country's problems.

• Second is Sabahi and his campaign. Especially assuming that the campaign remains ostensibly far from victory, Sabahi would be in the unique position of finding himself the subject of unparalleled attention and airtime with very little to lose. He could then, if he wishes, use this limelight to propose some bold policy ideas (Sabahi has yet to officially release his program as well, though his 2012 program exists and a purported leak of his new one has appeared lately), speak candidly about where Egypt is and where it needs to be, influence public opinion through this incomparable opportunity and even push the Sisi campaign to spar over policy and to take positions on what might otherwise be delicate subjects it may wish to avoid, including security reform and human rights.

• Third, especially assuming Sisi continues to hover far above competition in the polls, could well be the host of former anti-Mubarak opposition parties and forces who have either already endorsed Sisi or are not too opposed to seeing him as president and engaging in dialogue with him.

While much of that camp endorsed and participated in Morsi’s ouster, it's still deeply concerned about a return to the Mubarak days, especially a return to the police state. These forces, such as the Social Democratic Party, the Free Egyptians and the Wafd, could (again) come up with a much publicized official charter of what they demand of the next president.

Such a charter would include crucial reforms and decisions, including on the electoral and protest laws as well as on the status of the detainees awaiting trial and the turbulent conditions facing journalism in Egypt, and even on national governance issues such as health care that could at least help ensure better short-term conditions for the country.