Egypt’s elections: the meaning of Sabahi’s entry and Abul-Fotouh’s exit

Egypt’s presidential politics just got more interesting as Hamdeen Sabahi, the head of the Popular Current, announced his candidacy. 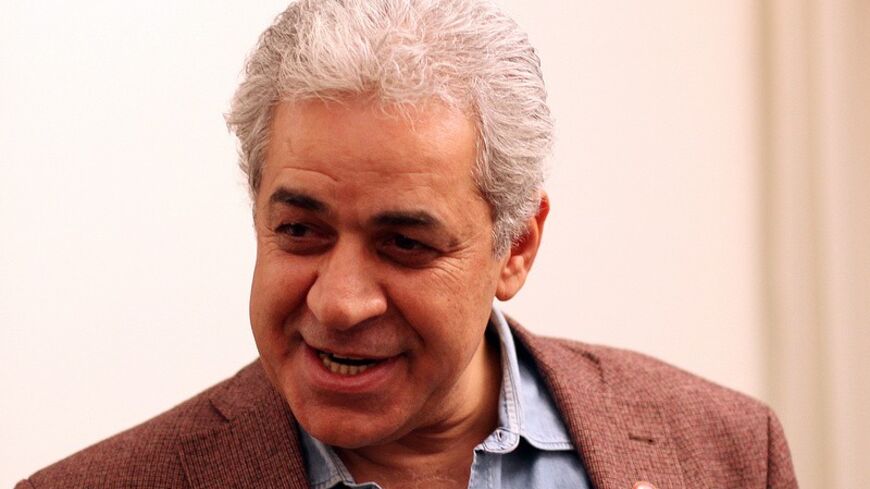 In a somewhat surprising turn of events in Cairo, Hamdeen Sabahi, head of the Popular Current (PC), announced on Feb. 9 his bid to run for the presidency. At a press conference that was visibly on the more spontaneous side in terms of organization and appearance, the former presidential candidate's announcement seemed to surprise even many of his enthusiastic supporters in the crowd, who cheered loudly. Sabahi’s choice of words, in which he stated that this was his "personal decision" as a "citizen, and that he wasn’t trying to bypass his 'partners in the decision'" (likely a reference to other PC leadership), appeared to reaffirm reports of a split inside the PC over whether or not the former third-place winner in the previous elections should run this time against Field Marshal Abdel Fattah al-Sisi. The army chief’s candidacy may not have been officially announced yet but remains pretty much a foregone conclusion. The PC has still to issue a formal statement on the matter, but an informed source told Al-Monitor that the PC is likely to now just fall in line.

In an ensuing and interesting turn of events, a visibly acrimonious split has begun to take shape within the Tamarod movement. Mahmoud Badr, one of the main three frontmen and founders of the movement, recently stated that Tamarod had officially convened and decided to fully support Sisi, whereas Hassan Shahine and Mohammed Abdel-Aziz have their own bloc that immediately endorsed Sabahi following his announcement. A war of words involving the factions as well as the PC ensued, coupled with a split between the movement's website and Facebook pages, in addition to further internal frictions and splits and a decision to freeze the memberships of Shahine and Abdel-Aziz, are all forcing a general assembly of the movement to convene on Feb. 10 to finalize the endorsement decision.

Alternatively, this afternoon, Abdel-Mon’eim Abul-Fotouh, the head of the Strong Egypt Party and the fourth-place finisher in the previous elections, announced that he would not run in the coming elections. Abul-Fotouh said participation would be tantamount to “deceiving the people,” and that the democratic course that was hoped for following the uprising of June 30, 2013, has been derailed. He condemned the current state of affairs in Egypt, citing thousands of “activists” and 83 journalists in prison, control over media and blasting the current administration for spreading a “republic of fear.”

Abul-Fotouh’s decision not to run comes, on the other hand, as very good news for Sabahi, who right now finds himself the only real alternative candidate to Sisi. Sami Anan, the former army deputy chief, who remains in the race, is widely seen as having virtually no chance, with most of his expected voter base likely to prefer the younger and more popular Sisi. The Salafi Nour Party, the second largest party in parliament after the Muslim Brotherhood, has also said it will neither nominate nor endorse an Islamist candidate for the coming 10 years. That leaves, thus far, virtually no one else in the race other than Sisi and Sabahi.

In one way, Sabahi’s run is good news for Sisi, despite the visible ridicule and outrage on social media from his supporters over Sabahi's candidacy. The field marshal, and both the entire transitional and electoral processes, would have been in a very awkward position if Sisi were to run unopposed by any substantial candidate. And yet, as things stand, Sisi remains in a very secure position in the elections. Backing him is a very substantial and passionate popular base, as well as what appears to be most of the dominant media, much of the intelligentsia, the state and likely many of the former and traditional power networks, and he has the distinction of being the military’s nominee, which remains the most popular and dominant institution in the country. And while Sabahi often likes to claim himself the torchbearer for the ideas of Nasserism, Sisi is right now better placed with regard to that claim, and posters of his face and Nasser’s are already becoming a common sight. Furthermore, in a time in which most Egyptians appear to be seeking stability, Sisi can bank on his military record and role as army chief as well as his governmental credentials, whereas Sabahi will mainly have his political activism background — something that was used against him in the previous elections. While there are no opinion polls yet, Sisi remains, thus far, quite likely to win the first round of elections.

Besides the advantages Sisi and his campaign will have, Sabahi also suffers from a drop in popularity after failing to properly build on his meteoric rise in 2012. He will also struggle with the fact that he has built much of his rhetoric and current identification around the January 2011 revolution, with the revolution seemingly less popular right now, given the turmoil of the past three years. His other traditional Nasserist rhetoric will likely be deeply contested. He will thus have to develop a different message if he hopes for something more than niche impact.

So, what can Sabahi hope for? Well, one of two outcomes. The first would be that the Sisi campaign and platform somehow either fail to impress or suffer some unexpected setback, leaving Sabahi as the only substantial alternative candidate. The other, and right now seemingly more tenable scenario, is for him to win just enough votes (he won 4.8 million votes last time around) to reaffirm his presence as a political leader and heavyweight over the coming years. While some commentary has suggested that disgruntled Islamists might vote for Sabahi out of spite, that remains a highly theoretical possibility (with a boycott being more likely), and Sabahi for many in that base is himself anathema. Without a more broadly appealing message and placement, Sabahi might end up only galvanizing a portion of the youth and pro-January 2011 revolutionary base, which will certainly not be enough.

While the upcoming elections right now don’t seem to be headed toward repeating the experience of 2012, in which many substantial and diverse candidates, campaigns and platforms competed and sparred, they are at least now already a bit more interesting given that they will not end up being, in effect, a referendum on a single name.