The Egyptian Tamarod movement is witnessing divisions among its members, namely concerning the support of presidential candidates and the issue of turning the movement into a political party. 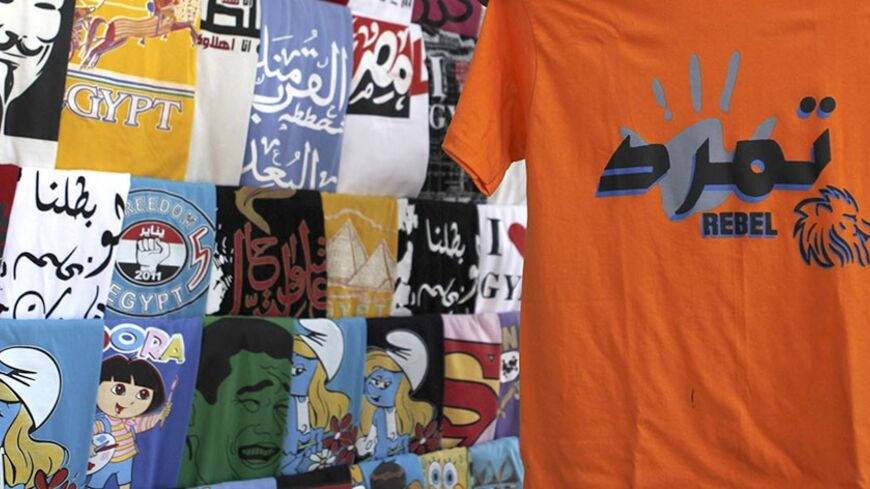 T-shirts for the Egyptian revolution are displayed in Tahrir Square in Cairo, June 23, 2013. - REUTERS/Amr Abdallah Dalsh

Although it has not yet been a year since the emergence of the Tamarod movement on April 26, 2013, the movement already looks mired in division and disintegration. Hamdeen Sabahi’s decision to run for the presidency has resulted in a state of division within the Tamarod movement in Cairo and across different provinces. Mahmoud Badr, one of the Tamarod’s founders, reiterated the movement’s support for the candidacy of Field Marshal Gen. Abdel Fattah al-Sisi in the presidential elections. Meanwhile, Hassan Shaheen and Mohammed Abdel Aziz, two other founders, announced their support for Hamdeen Sabahi. Moreover, there are efforts within the movement aimed at turning it into a political party that enjoys some clout within the political scene, an idea that has caused great division within the movement itself.

This scene raises questions about the movement’s aptitude for cohesion as well as its impact on the future of Egyptian political life.

Tamarod is an Egyptian opposition movement that called for the withdrawal of confidence from former President Mohammed Morsi, for early presidential elections, and for a demonstration on June 30, 2013, which marked the one-year anniversary of Morsi coming to power.

Tamarod did not cease its activity after June 30, as it joined the campaign titled “Against American Aid,” in reference to the US aid granted to Egypt on a yearly basis.

Leaders in the movement have decided to support Sisi in the upcoming presidential elections, and have started receiving requests from young people wishing to support Sisi, knowing that the latter has not yet made up his mind concerning his candidacy. Other Tamarod members have joined the campaign of presidential candidate Sabahi.

Mohamed Heikal, a member of the Tamarod movement’s political bureau, denied in an interview with Al-Monitor the existence of any division or split within the movement.

“What happened is that members of the movement conducted a poll to determine which presidential candidates they support, and the overwhelming majority supported Sisi. Thus, the movement responded to the opinion of the majority,” Heikal said.

“The support voiced by another group for the presidential candidate Sabahi is a personal opinion that we respect,” he added.

Heikal stressed the need for the movement to overcome internal differences as the presidential and parliamentary elections draw near.

Al-Monitor met with Mohammed Abdel Aziz, one of the founders of the Tamarod campaign who has recently declared his support for Sabahi's presidential campaign. Defending this decision, Abdel Aziz said, “I decided to support Sabahi based on a personal conviction. I can’t imposed this view on other members of the movement, thus I respect Sisi and everyone who supports him.”

“Tamarod is a large popular movement that contains different views given that it combines various social groups. So it is difficult to make all of these groups support one particular candidate,” he added.

Abdel Aziz stressed the importance of getting used to the culture of a difference in views. He regretted that people are accustomed to thinking that disagreement automatically breeds division, an equation deemed incorrect by Abdel Aziz.

Tamarod is perhaps witnessing a remarkable development in its exercise of politics, following the emergence of calls to turn it into a political party after the presidential elections. But these calls have been met with conflicting views within the movement.

Abdel Aziz believed that the idea of ​​turning the movement into a party has been on the table for some time now, but that it won’t happen before the presidential and parliamentary elections. He believes that this step, if taken, will have pros and cons.

According to Abdel Aziz, one of the positive aspects is that the movement would become a legal entity that can exercise political action, address the state authorities and have an official headquarters and funding sources.

Yet, according to him, there are disadvantages, including the poor partisan performance in Egypt in general, the bad impression that citizens have about political parties, and the fear that the movement would become bureaucratic with regulatory mechanisms and rules, which may hinder the freedom of creativity.

Meanwhile, Moheb Doss, a member of the Executive Office of the Tamarod movement, told Al-Monitor that he refuses the idea of turning the movement into a political party. He said that doing so would invalidate the covenant established with the Egyptian people and the statement made by Tamarod on April 28, 2013, during its first conference.

Doss noted that Tamarod will be finished once the presidential and parliamentary elections are held, as it was originally established to overthrow the Muslim Brotherhood regime and hold early presidential elections. Therefore, he believes that the next step of the movement will stem from the phase of dissolution. This phase, according to Doss, will not witness anyone from the movement presenting his or her candidacy, because the movement is against such a move.

From an analytical viewpoint, Ahmad Abed Rabbo, a professor of Political Science at Cairo University, told Al-Monitor that the main problem of the movement is the vagueness surrounding its very existence and the question of whether it is an opposition movement or a tool used against the Muslim Brotherhood and Morsi. Abed Rabbo expressed astonishment about the idea of turning the movement from an opposition movement into a movement of power and a tool of the old regime, as he described it.

He believes that the dispute within the movement concerning support for presidential candidates will spell its end as a revolutionary opposition movement after June 30, knowing that the movement has weakened and experienced divisions. Abed Rabbo drew a comparison between the Tamarod movement and the April 6 Youth Movement, given that the latter has disintegrated into two fronts: the Ahmed Maher Front and the Democratic Front.

He confirmed that the April 6 Movement continued to resist, but with the end of the real resistance, it started to get into personal conflicts due to its lack of experience. For its part, Tamarod witnessed a very quick split. He went on to say, “Opposition movements such as the April 6 Movement and Tamarod are supposed to engage in politics to oppose the regime. They should not turn into parties.”

Abed Rabbo expected further politicization of the movement, and said it would fail to shift to a political party, as political parties usually have a clear program and a certain level of resistance, which is difficult to apply to the Tamarod movement to develop.

Now that Tamarod has successfully overthrown the former Brotherhood rule, it is still facing a major challenge, which relates to its ability to stay cohesive and maintain its popularity gained since before June 30 until now. This is a challenge similar to that faced by the National Salvation Front (NSF) after June 30. Moreover, it seems that the movement has started to realize that it is threatened by the differences plaguing it. This prompted the youth to think about changing the path of the movement and transforming it into a political party to stay at the forefront of the new political landscape.