The request by Egypt’s Tamarod movement to form a political party was rejected due to missing information that the movement did not provide, thinking its position in the political scene before June 30 was enough to get its demands met. 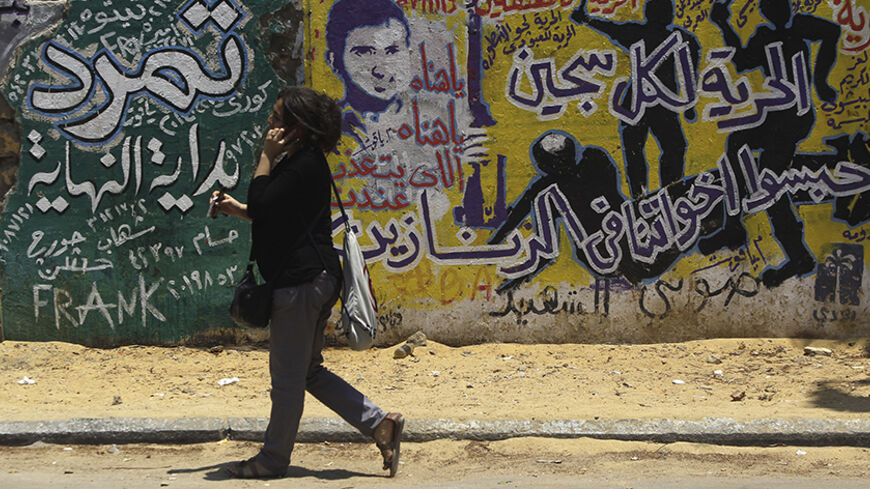 On Dec. 3, Egypt's Political Parties Affairs Committee rejected the application submitted by the Tamarod movement to form its party. The committee requested the movement to reformulate its bylaws and financial regulations in accordance with Article 5 of the political parties law, and to send the file to the first chamber of the Supreme Administrative Court. This decision raised questions about the movement’s efficiency and presence, and most importantly, whether the harmony between Tamarod and the current regime has ended or not.

Since the emergence of the Tamarod movement on the Egyptian political scene on April 23, 2013, it drew a lot of attention and remained in the spotlight even after June 30. Talks were still ongoing about its future and fate, especially after it accomplished what the people perceived as its main, initial task that was to topple Mohammed Morsi’s regime. Thus, Tamarod was similar to other youth movements, which were formed based on a specific mission whose accomplishment led to the division or the disappearance of those movements.

To avoid ending up like the youth movements in the post-revolution period, Tamarod sought to establish a political party to bolster its work and presence in the political arena, and to prepare for the third phase of the road map — as the movement participated in drafting the constitution on July 3, 2013, and will participate in the parliamentary elections, though it has yet to determine its candidates. Surprisingly, Tamarod thought it still enjoys the popularity it gained when it gathered 22 million signatures to withdraw Morsi’s confidence and submitted incomplete documents to the Political Parties Affairs Committee, thinking that the committee would immediately agree on turning it into a political party. Yet, it was shocked that it does not have any special status compared to the rest of the movements and forces seeking to be a political party.

Tamarod leader Maha Abu Bakr defended the committee's request for amendments. She told Al-Monitor, “The movement knows the requirements that must be met for the establishment of any political party, but it felt no need to have a party president, which is one of the items that the committee objected to.” She added, “Our president is historic President Gamal Abdel Nasser.”

Regarding the idea of becoming a political party, she said, “Some of us believe that Tamarod’s role has ended, that it is time to look to the future, to turn from Egypt the revolution, to Egypt the state, and to build a state of institutions and laws.”

She said, “The movement had no choice but to either turn into a civil organization or a political party, and we decided it is better for us to turn into a party.”

In regard to whether there is a relationship between Tamarod’s proposed party and its participation in the parliamentary elections, Abu Bakr said, “The movement sought to complete the procedures necessary to form a political party, to have greater opportunities to participate in the upcoming parliamentary elections.” However, she said Tamarod will participate in the elections, whether as a party or not, and that a plan was set forth to gain 50 parliamentary seats. Regarding alternatives to Tamarod in case of a final rejection, Abu Bakr firmly asserted, “There are no other alternatives to the movement but political parties."

Abu Bakr denied the idea that Tamarod’s role in the political life ended with the fall of the Muslim Brotherhood rule. She justified this by invoking the movement’s participation in the June 30 road map, most notably parliamentary elections.

However, Moheb Dous, one of the founders of Tamarod, has a different point of view. “The Tamarod movement has ended and it does not have any substitutes other than proposing new and innovative projects, either social or political, to mobilize the people,” he told Al-Monitor. “Tamarod should not turn into a political party since its members are already affiliated with other political parties.”

According to Dous, the incomplete request submitted to the Political Parties Affairs Committee reflects the division in the movement. Dous refuses the movement’s participation in the parliamentary elections, whether it was as a political party or independently. “We promised the people that we would not run for elections, and if we break this promise it would mean that we deviated from the right path,” he said.

Dous is surprised how some people say that the harmony between the regime and Tamarod has ended. “Since the establishment of our movement, we have asked the current regime to comply with our demands in case of assembling 15 million signatures to withdraw the confidence from Morsi, and this is what happened. We should not talk about other interests after achieving this goal,” he said.

Article 74 of the Egyptian Constitution stipulates that all citizens shall have the right to form political parties by notification as regulated by law. For a political party to be formed, it should have its own program, so as not to interfere with other parties.

In an interview with Al-Monitor, constitutional expert Issam Islambouli denied any contradiction. “The committee does not refuse a party’s request, but all parties are asked to meet certain qualifications,” he said.

He added, “The movement has been notified due to the lack of information [in its request], including not naming the head of the party. Consequently, the committee does not have the right to refuse; instead, it has to forward the request to the Supreme Administrative Court, and set a time line to correct the situation.”

Hazem Hosni, a professor of economics and political science at Cairo University, told Al-Monitor that Tamarod’s popularity decreased due to the disagreements between its leaders over the movement’s spokesman and public name. He expects the movement to disappear from the political scene in the future and attributes this to the divisions that it is exposed to. Hosni did not rule out that the regime has dispensed with Tamarod, since it has no lasting friends and its friendships are temporary.

Signs of division began appearing within the movement in light of the request to form a political party and the subsequent decline in the awareness of the legal situation of the post-June 30 regime, which they had participated in creating.

It seems that the political movement’s future is still uncertain. It will remain at a standstill as long as Tamarod continues to exploit its commercial stance on the Egyptian street, as the legal and constitutional requirements of the political system and the political work in general require mechanisms that are different from revolutionary action.