The legitimacy and relevance of Egypt’s Tamarod movement are being called into question now that the movement seems to have achieved its goals, mainly the overthrow of former President Mohammed Morsi. 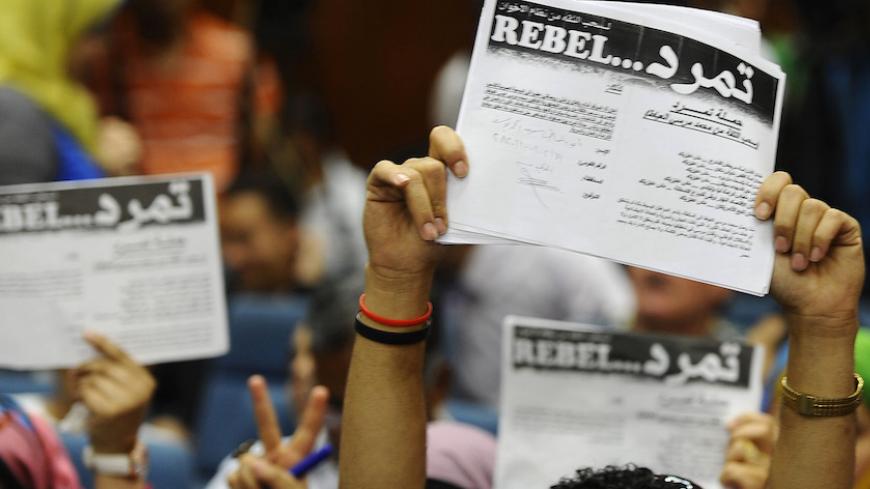 Protesters opposing Egyptian President Mohammed Morsi hold up documents from the Tamarod campaign during a news conference at their headquarters in Cairo, May 29, 2013. - REUTERS

CAIRO — Several questions have been raised on the second anniversary, on April 28, of the Tamarod movement (Arabic for “rebellion”) — a grass-roots campaign that played a major role in the overthrow of former Egyptian President Mohammed Morsi and the Muslim Brotherhood regime only one year after its ascension to power in Egypt. Chief among those questions were inquiries about the future of Tamarod, its current position in the Egyptian street and the validity of the accusations by the Supreme Administrative Court of Tamarod's having received foreign money and support, particularly from the United Arab Emirates (UAE).

The Tamarod movement, established in 2013, laid out the causes behind its rebellion against Morsi and its call for early presidential elections in a Tamarod form, part of one of Tamarod’s campaigns that includes the sale of the Suez Canal to Qatar, poor people sleeping on an empty stomach, lack of security, poor hygiene in the country, the Egyptian Constitution suiting the Muslim Brotherhood’s convenience, deterioration of economic conditions, lack of citizen dignity and nonrestoration of the January 25 Revolution martyrs’ rights and not holding accountable those responsible for the killings by the Hosni Mubarak regime.

The campaign collected 22 million signatures, and on Nov. 26, 2013, a group of its founding members held a conference titled “Correcting the Pathway," during which they announced that seven of its members had been referred to investigation on the grounds of turning the campaign into a political movement, without the consent of the campaign’s rightful “owner,” namely the Egyptian people. The investigation is being handled by Tamarod founding members.

The division within the ranks of the movement exacerbated after the movement's founder, Mahmoud Badr, called for the support of Abdel Fattah al-Sisi in his presidential run in February 2014. On Feb. 9, 2014, the movement announced the freezing of the membership of Hassan Shaheen, Mohammed Abdul Aziz and Khaled al-Qadi for their support of Hamdeen Sabahi. Sabahi was one of the opposition symbols within the Egyptian parliament during the reign of Hosni Mubarak and had run for president against Sisi, which is why Tamarod considered showing support for Sabahi a divergence from Tamarod’s standard direction. Tamarod was subsequently split among supporters of Sisi, supporters of Sabahi and other dissidents who did not want the popular movement to join the political conflict at the time.

Meanwhile, the efforts of its youth leaders have not yet succeeded in converting the campaign into a political party.

“No one believes that Tamarod can have a political role as a party or even as a social movement in the Egyptian street,” Ammar Ali Hassan, researcher in political movements affairs at the Al-Ahram Center for Political and Strategic Studies, said in an interview with Al-Monitor. Asked about the reason behind the declining popularity of Tamarod, Hassan said that the role of the movement has become meaningless now that its goals (similar to the Kefaya movement’s role) — which were achieved with the departure of the Brotherhood regime — ended with the departure of Mubarak's regime.

Hassan said the Tamarod movement was more of a sensational legend or a temporary popular case that resulted from severe and deep ire on the part of broad sectors of the Egyptian people against the Brotherhood rule. However, this feeling received no response from prominent members in the Tamarod movement. “It is absurd for anyone seeking to turn the Tamarod movement into a political party to act as if all those who signed the Tamarod form would necessarily support the establishment of a party. This is a wrong equation,” he said.

For her part, the official spokeswoman for the Tamarod movement, Maha Abu Bakr, said that the movement was still up to the expectations of the Egyptian street. "The proof is in the number of authorizations that have been collected to establish a new party,” Abu Bakr told Al-Monitor. “The Tamarod leaders still include youth who want the movement to continue to reflect the pulse of the Egyptian street once the movement becomes a party to translate the demands of the masses in the parliament."

National Partnership Current spokesman Mahmoud Afifi told Al-Monitor: “The Egyptian street rose up against the Tamarod movement because of the irresponsible behavior of some of its leaders, who ignored the fact that the campaign belonged to the entire Egyptian community since the very beginning, and not to specific people. They [Tamarod] wanted to monopolize the decision, mobilize the public and impose a nationalist ideology although the campaign brought together people of all orientations, including liberals, leftists and Islamists. Consequently, these leaders strayed far from the consensus that they had garnered, besides the accusations against some of its leaders of receiving funds from foreign parties. These accusations were made by founders of the campaign itself.”

Asked about the validity of the accusations, one of the prominent founders of the Tamarod campaign, Moheb Doss, told Al-Monitor, “We opened the door to the Egyptians to make donations as we were founding the campaign, and the resources committee was in charge of the matter. Meanwhile, some of the figures in the campaign were accused of receiving funds into their personal accounts from suspicious sources, be they remnants of the pre-Jan. 25 regime or foreign countries. Thus, these [Tamarod members] were disowned while seven leaders were referred to investigation. After the presidential elections, the final Tamarod conference was held in the movement’s headquarters, and the ending of the campaign was announced after it reached its two major goals, namely the isolation of Morsi and the presidential elections.”

Doss, one of the dissidents who condemned the Tamarod movement‘s potential conversion into a political movement, said that the “road map that was signed by the Tamarod leaders who were in the spotlight with the country's leaders at the time was different from the road map that we had supposedly agreed upon, including the political isolation of the pre-Jan. 25 regime and pre-June 30 regime, the revolutionary trials and a referendum on a treaty that we reject, namely Camp David that was signed with Israel. All of these points were missing and the only thing that was agreed upon was the isolation of Morsi.”

Asked about the accusations of receiving funding from the UAE, one of the leaders of the Tamarod campaign, Shaheen, who contributed to the attempts of turning the campaign into a political movement prior to his defection, said in an interview with Al-Monitor, “These accusations are not worth responding to, and they are made by the Brotherhood, which is working on tarnishing the image of the movement.”

He added, “The Tamarod movement is a popular movement that played a profound role on June 30, and we are proud to have been among its founders."

On his defection, Shaheen explained that it was merely the result of a difference in views concerning the presidential elections, with the knowledge that some of the campaign members supported Sisi, while others chose Sabahi.

The prosecution of the Egyptian Tamarod movement on charges of obtaining foreign funding remains a major and active reason behind the mobilization against it and distortion that is negatively affecting its popularity.