Palestinian activists under the name of Tamarod have distanced themselves from another Tamarod group in Gaza's calls to overthrow the Hamas government. 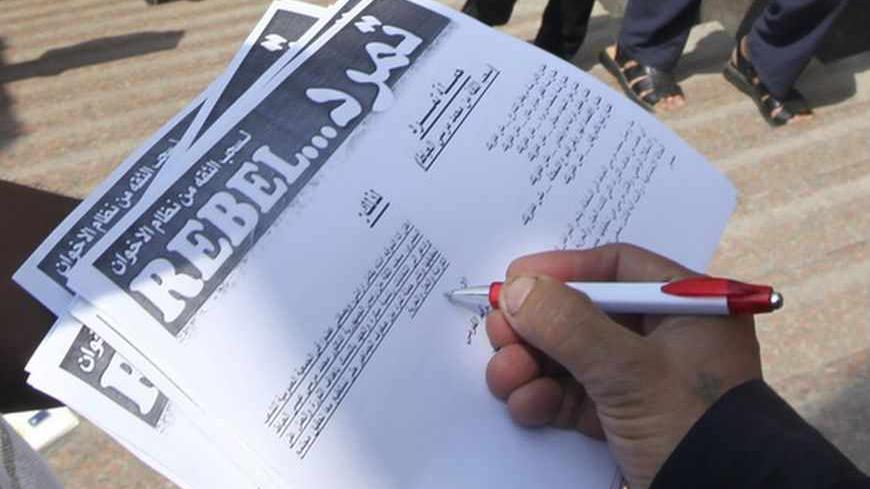 A man signs a "Tamarod" document at Tahrir Square in Cairo May 16, 2013. - REUTERS/Mohamed Abd El Ghany

RAMALLAH, West Bank — Following the ouster of Egyptian President Mohammed Morsi in early July, much confusion has arisen regarding the Tamarod campaign in Palestine. Multiple groups in Gaza and the West Bank carrying the same name have emerged in recent months.

The name originally belonged to the Egyptian movement, which claimed that it had gathered more than 22 million signatures supporting the overthrow of Morsi and organized a day of mass protests on June 30. Yet, the unverifiable and hyperbolic statistics of more than 30 million Egyptians protesting in the streets, as well as the unseating of Morsi by the army a few days later, has led many to question the grass-roots nature of Tamarod, and whether it was connected to the greater scheme of a military coup.

The multiple Tamarod groups do not share the same agenda. In Gaza, the Tamarod group is portrayed as one hell-bent on overthrowing the Hamas government, similarly to how the Muslim Brotherhood was toppled in Egypt. The group is calling for a day of mass protest on Nov. 11, the anniversary of the late Fatah and PLO leader Yasser Arafat’s death.

What media coverage of this group failed to mention was how such a program would further strengthen the Palestinian political division, especially if no alternatives were offered. But with the Egyptian regime tightening the siege on Gaza by destroying the tunnels, compounded by Fatah spokesperson Azzam al Ahmad’s dangerous statement on local Palestinian channel Ma’an TV that, “If I could go back to Gaza on the back of an Egyptian tank, I would,” there seems little doubt that the Gaza Tamarod group, however small, is following a specific and harmful agenda backed by the Egyptian military and Fatah.

This is no mere speculation. Orouba Othman, the Gaza-based spokeswoman for the general Palestinian Tamarod campaign, wrote several articles questioning the intentions of the Gaza Tamarod movement. In her latest piece, she pointed out the contradiction of the Gaza Tamarod’s statements claiming their “independent identity” free from the influence of political parties and their close ties to the Egyptian Tamarod, by interviewing the spokesman for the Gaza Tamarod, Abdelrahman Abu Jami'.

“If Hamas does not abandon its rule after the people asked them to do so, we will follow the example [of Tamarod] in Egypt, and we will ask to sit down with the Egyptian military leaders soon,” Abu Jami’ was quoted as saying.

The Palestinian Tamarod campaign, as explained to Al-Monitor by West Bank spokesman Mohammad Masharqa, was formed at the end of May 2013 as a non-partisan group of young Palestinian men and women throughout the country and those in exile.

“What united us were the beliefs and opinions that included adopting every means of resistance against the Israeli occupation for the sake of liberating the entire country,” he began. “We refused for the term 'resistance' to be confined to mean one thing or another.”

Spokespeople were announced from the West Bank, the Gaza Strip, the 1948 occupied territories and the exiled, as a reflection of the occupation-imposed geographical separation. The first statement was published June 20, International Refugee Day, and outlined the reasons for rebelling against the status quo:

The name of the campaign was decided to be “Oh Palestinian, Rebel/Tamarod” after lengthy discussions between the activists. However, Masharqa underlined that with the emergence of multiple Tamarod groups in Palestine, some of which strove for the same goals, and in light of the actions of the Egyptian Tamarod, it was incumbent upon the Palestinian Tamarod campaign to change its name to “Qawem,” or Resist.

As for the plan of action, Alhindi did not deny that in addition to holding workshops in preparation for different activities in each geographical location, some of their work is based on a similar campaign the Egyptian Tamarod movement carried out. This includes collecting signatures throughout Palestine that affirm the lack of a true representative Palestinian body. However, he also acknowledged that actions and events are prone to change, as the campaign itself is still very much fluid in this aspect, in how to translate theory to practice.

“We are aware that there is a long road ahead of us,” Masharqa stated. “We work within a long-term vision and strategy. We must form a political resistance mandate against the Oslo agreement, which is mired in normalization and negotiations with the Israeli occupation. We are not an opposition movement aiming to overrule governments; we are a national liberation program which aims to regain the inalienable Palestinian rights that the Oslo leadership repudiated.”