Tamarod Calls for Protest Against Hamas in Gaza

The Palestinian Tamarod movement has set the date of Nov. 11 for a mass protest against Hamas' rule of the Gaza Strip. 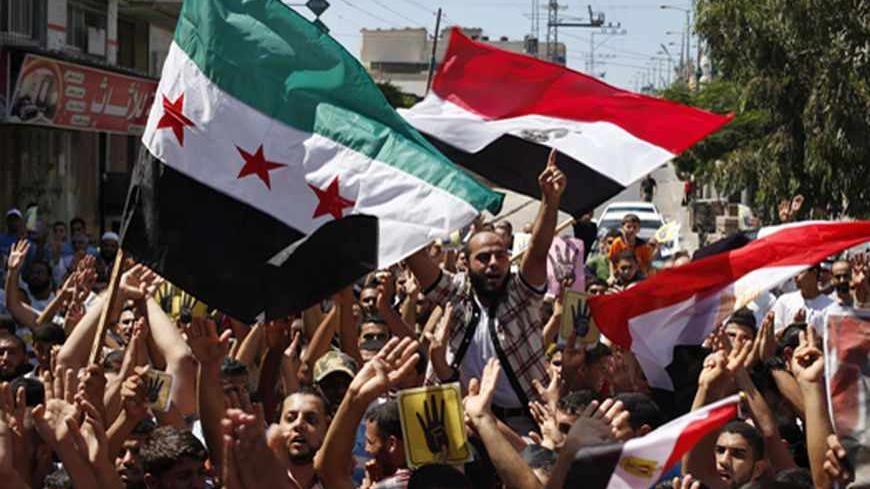 Although Gaza’s Interior Ministry is trying to downplay the importance of this movement, the security authorities on the ground seem to have a different opinion. They summoned and detained a large number of journalists, activists and politicians to question them about Tamarod.

The director of the Interior Ministry's information office, Iyad al-Bazm, dismissed the protest call on Al-Monitor as “merely a movement on Facebook — in the virtual world, nothing more than that.”

According to the Skeyes Center for Media and Cultural Freedom, in August 2013, more than five journalists and writers from Gaza were summoned for security investigations because they mentioned the word Tamarod in their reports, articles or programs, or on social networking sites.

“It all started in July 2013 with a phone call from an unknown person threatening to cut off my fingers for having written about Egypt on Facebook. Following this call, I was summoned three times,” Majed Abu Salama, an activist and freelance journalist who was detained, told Al-Monitor.

Abu Salama, who confirmed that he is not affiliated with Tamarod, added, “Every time they asked me about Tamarod and if I was a member. The last time they detained me [on Aug. 27] the officer warned me that if I was a member of the Tamarod movement, I better withdraw immediately.”

It seems that the Hamas government and Prime Minister Ismail Haniyeh are preoccupied by Tamarod. The latter even referenced the Tamarod movement in one of his speeches. It is worth mentioning that this is the first time Haniyeh has given attention to a youth movement, ever since youth initiatives and movements emerged with the founding of the Isha (Wake Up) movement in 2009, all the way to the March 15 youth movement gatherings in 2011.

During a speech marking the launch of a charitable program in the Gaza Strip on Aug. 21, Haniyeh said, “We are hearing some calling for rebellion and ground action. I support the rebellion [Tamarod], but a rebellion against occupation.” He added, “This language should not be used among Palestinians. Do not embark on this dangerous path. It is a path which could have severe consequences on our unity.”

The tools recently used by Tamarod Palestine are audacious and highly developed. The movement distributed a statement to the homes of some Hamas leaders and even posted a sign of solidarity with Al Arabiya and Maan News Agency on the doors of their offices, which were recently closed by the government in Gaza.

Al-Monitor met with a member of the Tamarod movement, known as Abu Yamen. “We gathered nearly 6,420 signatures of citizens who do not want the Hamas government,” in a move similar to that carried out by the Egyptian Tamarod movement, which gathered 22 million signatures calling for the ouster of deposed President Mohammed Morsi.

“We are numerous and rely on field as well electronic work. We take the papers to people to sign them wherever they are,” Abu Yamen, 20, added.

He said that they are seeking to oust both governments in the West Bank and the Gaza Strip, stressing that their goal was obvious in the statements they have issued and the videos uploaded on YouTube, in which they talk about the elections and reconciliation. However, the last video had a different story.

“I was in prison with a large group of young people from the Tamarod movement when this video came out. The video focused on overthrowing the Gaza government, showing three masked men, so as to emphasize that our work will continue even if we were in prison,” he said.

“Most of us were arrested and beaten. Our houses were searched and our papers and electronic devices were confiscated. However, we will continue with our work. It is not about where we are but about the citizens’ desire to rebel,” he added.

Abu Yamen spoke of the decentralized nature of Tamarod’s leadership and said he expected protesters “to be kidnapped on Nov.11.”

“However, this does not matter as long as everybody will speak up — whether women, students or taxi drivers. People can no longer be silent facing this injustice, oppression and deteriorating economic situation. Every citizen will be a leader and will take a camera to record what will happen. The march will be a march of mobile phones,” he said.

The group made the daring decision of sending statements directly to the homes of some Hamas leaders. “We went out at dawn and in 45 minutes we managed to place statements at the gates of the Legislative Council headquarters and at some homes of Hamas leaders in the south, north and central Gaza Strip. We did the same with the banners of solidarity we placed at the gates of the offices of Al Arabiya and Maan News Agency,” Abu Yamen said.

The irony, Abu Yamen explained, was that they are learning from Hamas itself. “Some Hamas members have been encouraging and helping us to print articles and others are sending us messages of encouragement,” he said.

Abu Yamen waved a book written by an author affiliated with Hamas, who incredibly described the skills of a Palestinian detainee in Israel who withstood all of the Israeli intelligence’s techniques to make him confess.

“We have succeeded in challenging one of the most powerful security apparatuses, which is the Internal Security Service of the government of Gaza, through this book that was read by all members.”

Abu Yamen rejected claims his Tamarod movement is affiliated with Hamas' rival Fatah, and is part of a Fatah-led campaign to undermine Hamas.

“We are exposed every day to hundreds of attempts to hack our Facebook page, which has more than 22,000 followers. We asked a young Palestinian technology expert abroad to protect it. We do not have suppliers, and we are not affiliated with any side. We are not collaborating with the Israeli occupation forces or supported by Arab or foreign intelligence services. We collect from each member $20 at the end of every month to print statements and banners. On Nov. 11, the day of insurgency, we will not need anything but water and will.”