Hamas and political analysts do not expect significant demonstrations on Nov. 11 as Tamarod tones down its rhetoric ahead of the protest. 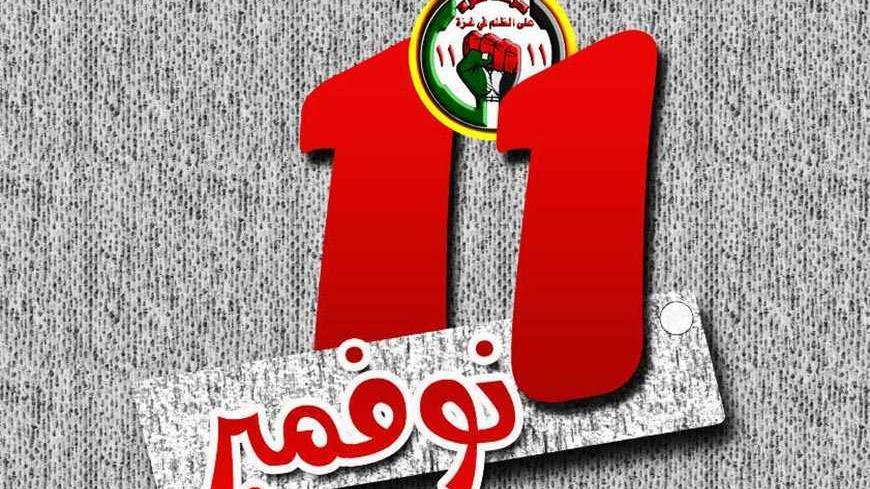 The logo for the Gaza Tamarod movement, which is scheduled for Nov. 11, 2013. - Facebook

GAZA CITY, Gaza Strip — Less than a week remains before Nov. 11, the date set by the Tamarod movement for street demonstrations against Hamas rule in the Gaza Strip. As that date looms closer, rumors and gossip have spread among the Gazan populace.

“We heard that bloody confrontations will take place on the streets. I expect that people will participate in the demonstrations, as the date also marks the anniversary of [late leader of the Palestine Liberation Organization] Yasser Arafat’s death,” said Mohammed, a resident of Gaza.

“I think that confrontations will occur despite the fact that I hope otherwise,” concurred "GA." She clarified that everybody was talking about orders being given for security forces to shoot at the heads and not the legs of demonstrators on Nov. 11.

“I am certain that the people who killed Yasser Arafat are the same ones who have transformed the anniversary of his passing on Nov. 11 into a day of tumult and sedition through the stupid calls of the Tamarod movement,” wrote Adham Abu Silmiyeh, a political activist with close ties to the government, on his Facebook page.

Al-Monitor met Aug. 29 with a Tamarod member who identified himself as Abu Yamen. He said, “We expect to be kidnapped on Nov. 11, but that will not matter as long as everyone else, whether they be women, students or taxi drivers, goes out and demonstrates. No one can afford to remain silent any longer in the face of injustice, oppression and the worsening economic situation.”

The condition described by Abu Yamen deteriorated further during September and October, as tunnels between Gaza and Egypt were almost completely destroyed and Israel stopped shipping fuel to the Strip. The fuel shipments had been substitutes for fuel that Egypt had already ceased delivering.

Jamal al-Khudari, a member of parliament and the head of the Popular Committee Against the Siege, warned in statements to the press Nov. 5 of an impending humanitarian catastrophe as thousands of workers joined the ranks of the unemployed and poverty rates rose. He attributed the crisis to Israel preventing the importation of building materials by international organizations and the private sector, as well as the closure of hundreds of factories. As a result, per capita income decreased to $2 per day, among the lowest in the world.

People will not participate

Despite the poor living conditions and power being out for 12 hours a day, political writer Akram Atallah does not expect circumstances to compel people to heed Tamarod’s call. He said, “Gazans lack the rebellious mindset. They would rather adapt, and are highly fearful. They would never tell their rulers to leave, but would look for easy alternatives to avert any confrontation.”

He noted that this fear was mainly due to the security forces’ campaigns of intimidation, most noteworthy of which was the action Hamas took against the Daghmash and Halas families. There was also a shooting during the anniversary of Arafat’s death in 2007, and an attack occurred on the March 15 sit-in in 2011.

According to Atallah, Tamarod’s other difficulty lies in its poor organization on the ground. He explained, “Tamarod Palestine is nothing but a cut-and-paste attempt to emulate the Egyptian experience, without taking into account the Strip’s specificities. Furthermore, contrary to what occurred in Egypt, no prior preparations have been made, such as the adoption of the movement by democratic forces. In Tamarod’s case, Gaza’s factions have washed their hands of the movement,” he added. He predicted that Nov. 11 would be just another ordinary day marked only by a considerable deployment of Hamas forces.

This expectation was shared by the director of the Interior Ministry's information office, Iyad al-Bazm, except for the part concerning the deployment of forces. He told Al-Monitor, “We do not have any specific security plans for Nov. 11. It will be just like any other day, because our main battle is with the occupation forces. We do have contingency plans, however, to deal with any escalation.”

A change in Tamarod’s rhetoric

For its part, the Tamarod movement reiterated through its Facebook page its previous complaints concerning Gaza security forces pursuing and arresting young people for allegedly belonging to Tamarod. The movement apologized for not updating its Facebook page as a result of said harassment.

Tamarod’s rhetoric has undergone a dramatic transformation. In a video released Nov. 2, not only was the speaker not wearing a facemask, his identity as European resident Ahmed al-Hamamra was visible for all to see as he proposed a peace initiative that some consider a retreat.

“We will suspend our rebellion against Hamas’ oppression if we receive a document prior to sunset on Nov. 8, witnessed by all factions of the Palestine Liberation Organization, including Fatah, the Islamic Jihad and all other figures who worked toward making it a reality, in which Hamas agrees to hold general legislative and presidential elections,” Hamamra said in the video.

Youth activist Ahmad Ali (a pseudonym), who was released two weeks ago from detention by the Gaza security apparatus, explained Tamarod's new approach, telling Al-Monitor, “I think that Tamarod’s rhetoric becoming more diplomatic can be attributed to the Israeli escalation targeting Hamas. He noted that any action against Hamas while it was being targeted by Israel would be construed as colluding with the latter.”

He added, “I saw about 15 young men being interrogated. Some were asked about money and weapons they received through Mohammed Dahlan to support Tamarod.” He opined that Tamarod only existed on Facebook and that security forces had blown the organization out of proportion.

Security is a red line

On Oct. 21, young "JS" was also arrested on the charge of belonging to Tamarod. He recounted to Al-Monitor that during his 16-hour interrogation, he saw no fewer than eight young men brought in and accused of being part of the group. He also said that he saw a number of full detention cells.

“During the interrogation, the officer told us that it would not have been a big deal had we been arrested for cavorting with girls or carrying drugs. Security was a red line, and by that he meant rebelling. The officer went on to say that they would nab [Gaza Prime Minister] Ismail Haniyeh himself if he jeopardized security,” the young man added.

On that subject, Interior Ministry official Bazm said that nothing the officer said was unacceptable. He told Al-Monitor, “What he said is true. Security matters are of the utmost concern in all countries of the world. The officer’s words about the prime minister only indicated that all people are equal when it comes to security.” He denied the existence of any political detainees, asserting that all prisoners had been incarcerated for communicating with occupation forces or for committing criminal acts.