Palestinian activists say they are being harassed by Hamas' security services as unease engulfs Gaza before planned Nov. 11 anti-Hamas protests. 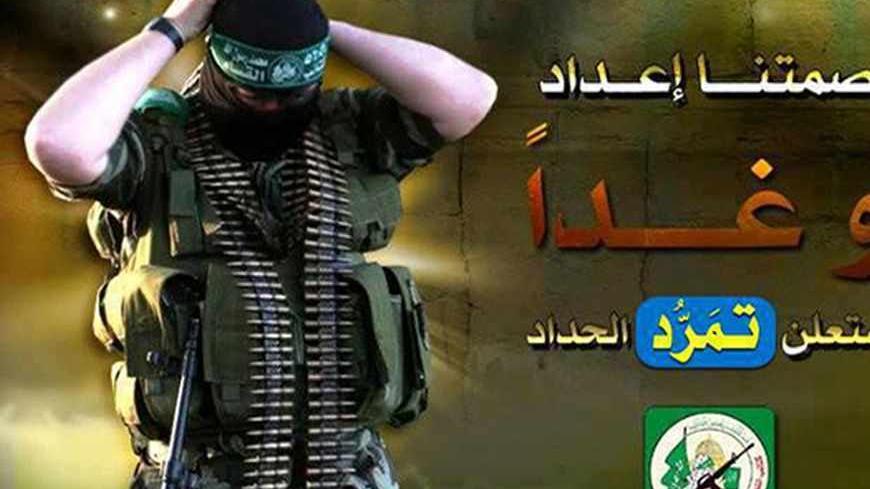 A photo on Facebook showing an armed member of the Izz ad-Din al-Qassam Brigades warns Tamarod members in Gaza against participating in the planned demonstrations on Nov. 11. - facebook.com

GAZA CITY, Gaza Strip — Tamarod in the Gaza Strip has become something of a hot potato, with no one wanting to get burned. In the last two months, Hamas security agencies have apprehended dozens of Fatah-affiliated political activists and journalists and charged them with belonging to the “Tamarod movement.” According to previous reports and follow-up by Al-Monitor, most of those detained have denied any affiliation with the movement.

The Palestinian Tamarod movement was formed along lines similar to those of its counterpart in Egypt, which ousted the Muslim Brotherhood regime there following mass demonstrations that began June 30. The movement in Gaza has announced that its goal was to depose the Hamas-led government, drawing criticism from other Palestinian activists in Gaza and the West Bank, as reported by Al-Monitor's Linah Alsaafin on Sept. 10.

Among those accused of belonging to Tamarod was the 30-year-old activist Iman (a pseudonym). “I am known for my activism against Gaza’s government. As such, when I heard about Tamarod, I wrote on my Facebook page that I was not affiliated with it in order to avoid being accused of being a member,” she told Al-Monitor. “Despite that, I was contacted by one of Gaza’s security agencies and told that if I belonged to the Tamarod movement, I should immediately withdraw from it.” Iman, who has been arrested and summoned numerous times during the past few years, explained that in the course of being interrogated, other activists had been asked about her.

Islam Shahwan, spokesperson for the Ministry of Interior and National Security in the Gaza government, announced Sept. 15 on the website of the Hamas-affiliated Palestinian Information Center that Fatah’s leadership in Gaza had disowned all calls for chaos and rebellion in Gaza. Nonetheless, the statement went on to say, “But, at the same time, we do not absolve Fatah from responsibility or the repercussions of any internal Fatah-instigated turmoil.”

He confirmed the existence of coordination between his ministry and the resistance factions. He said, “There is coordinated and constant contact with the leaders of the various factions and their military wings. We are comfortable with these factions’ level of security awareness, which puts the higher interest of the Palestinian people above that of their parties.”

The desire to deny belonging to the Tamarod movement can be attributed to the fear engendered by the stern warnings that security officers have been deliberately issuing through word of mouth and on social networking sites. In this regard, a photograph was published in the name of Hamas’ military wing, the Izz ad-Din al-Qassam Brigades, showing an armed member of the organization with the following slogan underneath: “We prepare in silence, and Tamarod’s funeral tomorrow will come. 11/11 is our deadline,” referencing the date set by Tamarod for mass public demonstrations.

A number of people in Gaza confirmed to Al-Monitor that they had noticed the daily presence of masked gunmen, especially at night, walking along the walls lining the sidewalks. One of those witnesses, K.S., from Rafah, confirmed seeing a number of masked al-Qassam soldiers standing a few meters apart. “There were lots of them, and they were armed with various types of weapons, some of heavy caliber, such as RPGs,” he said.

As part of its media campaign against Tamarod, the Ministry of Interior announced at a Sept. 6 news conference, aired on Hamas-owned Al-Aqsa Television, that authorities had arrested several people who had confessed to planning “to target the Strip and stir up unrest.”

At the same news conference, Shahwan asserted that security agency surveillance had “uncovered suspicious movements by some individuals with the aim of targeting our people’s resolve, internal front and resistance. These people then became the target of intense security investigations that uncovered links between some of them and the Zionist occupation forces, Ramallah’s Intelligence and Preventive Security Services as well as the intelligence services of some Arab countries.”

During the conference, a video clip was played showing an individual whose features were blurred. He talked about his relationships with various intelligence services and their funding of the Tamarod movement with the aim of fomenting a coup against the Gaza government within the next six months.

In contrast, Hamas leader Salah Bardawil had given a statement the day before, during a meeting with a select group of journalists, among them Al-Monitor’s correspondent, that contradicted all the preparations on the ground. “We will not suppress Tamarod,” Bardawil declared.

He contended that the dominant point of view inside Hamas was that repression would not ensue and that the voice of reason would prevail, even if matters took a turn for the worse on Nov. 11.

“God forbid that the al-Qassam [Brigades] intervene, for doing so does not fall within the purview of their responsibilities, which focus on defending Gaza from Israeli aggression,” Bardawil said. “But, in return, we want trust to prevail, because security officers, by nature, are fixated on certain aspects and tend to repress. But, this confrontation is not a battle for the military that we are building with our blood,” he added.

Khalil Chahine, an activist and human rights defender, said the security threat surrounding Tamarod is overblown. He noted that peaceful gatherings, based on the Palestinian Basic Law and international standards of human rights, are perfectly legal.

“Personally, I consider this movement to be fictitious and its influence and scope to be very limited and confined to certain circles,” he told Al-Monitor. Chahine said that despite this, nobody had the right to obstruct peaceful gatherings and asserted that the persecution of a large number of people by security agencies only reflects the state of confusion that prevails inside Hamas as a result of developments in Egypt, where Hamas has lost its strategic ally.

Chahine noted that people in Gaza were living in fear and apprehension as a result of some irresponsible statements. “These were statements that reminded the Strip’s inhabitants of a black period in their history, when infighting, killing, intimidation and kidnappings were the norm between Palestinians,” he said.