The decision by Abdel-Mon’eim Abul-Fotouh not to run for president leaves open who, if anyone, will pick up the Islamist mantle in the election. 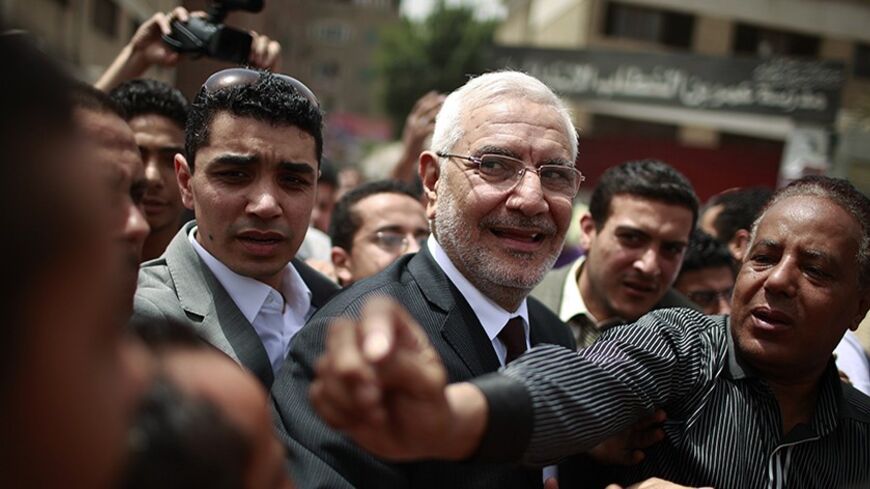 Then-presidential candidate Abdel-Mon’eim Abul-Fotouh visits people outside a polling station during the presidential elections in Cairo, May 23, 2012. - REUTERS/Suhaib Salem

For former presidential candidate, Abdel-Mon’eim Abul-Fotouh, perhaps not running for president again was not a surprising decision. In an interview with the Egyptian newspaper Al-Ahram last Friday, he said that he wouldn’t engage in "political cosmetics," a clear indication of how he viewed the current crisis in Egypt. He reaffirmed his opinion on Sunday by saying, “I won’t take part in deceiving people into believing we have a democratic path when we don’t.” Abul-Fotouh’s assessment is an accurate reflection of the current political atmosphere in Egypt, however, his decision is also an indirect admission that he stands no chance of winning the backing of Egyptian Islamists, and non-Islamists beyond his core supporters in Egypt Strong Party. Unlike in 2012, in which some Salafists and the young Muslim Brotherhood backed Abul-Fotouh, this scenario is no longer possible. In fact, even in a free and fair election, the chance of Abul-Fotouh garnering more votes is very slim.

Burning the last bridge with the Brotherhood and other Islamists

He later acknowledged the mistakes committed by the Muslim Brotherhood from the beginning of the revolution through Morsi’s ill-fated presidency, and called for an early presidential election. He has even described the June 30 uprisings as a “revolutionary wave that turned into a coup on July 3.” Nonetheless, despite calling the ousting of Morsi a coup, Abul-Fotouh has refrained from joining the anti-coup sit-ins in Cairo's Rabaa al-Adawiya and al-Nahda squares. He was content with criticizing the military-backed interim government for violently ending the sit-ins, a move that infuriated many Brotherhood supporters. Some even went so far as to call him a traitor.

Analysts who assumed that Islamists would blindly rally behind any Islamist candidate missed the observation that cool pragmatism is not the prevailing theme amidst the wide political agitation in Egypt. Emotions run high. The anti-coup will either boycott or back another army man like former chief of staff Sami Anan, or even former presidential candidate Hamdeen Sabbahi just out of spite toward Field Marshal Abdel Fattah al-Sisi.

On the other hand, the Salafi Nour Party, which also criticized the Muslim Brotherhood's year in power, has taken a different, more supportive stance on July 3, and has decided to back the interim government. Many Nour Party senior members have described Abul-Fotouh's views as “idealistic” and even “romantic” but not applicable on the ground. Although the Salafi party has yet to decide whom it will back for president, it is safe to assume that it will not back a politician that completely disagrees with most of their political stances.

Burning bridges with the non-Islamist camp

Many non-Islamists view Abul-Fotouh with a high level of suspicion. Many see him as still emotionally attached the Brotherhood to a degree that could cloud his political decisions. Of those who backed him in 2012, many have changed their views of him. Egyptian actor Athar El-Hakim is one such example. In an interview on Al-Arabiya, she admitted that that she no longer supports Abul-Fotouh, but she refrained from mentioning her reasons for the shift.

Moreover, to many, Abul-Fotouh’s assertion that he opposes the Brotherhood’s mixing of religion with political life is unconvincing. They question what would have happened if the Brotherhood had allowed Abul-Fotouh to run in the 2012 election. Would he be happy to continue as a member? If yes, would that not be mixing politics and religion?

In the 2012 presidential debate, Abul-Fotouh reinforced what he has already mentioned in his manifesto, meaning a clear commitment to Sharia, but he didn’t elaborate what exactly he means by this. The maqasid (goals) of Sharia, as I wrote before, is a very elastic concept that raises many questions about its application. To add to the confusion, Abul-Fotouh and his party, Strong Egypt, have rejected both of Egypt’s last constitutions, the 2012 Morsi constitution, and the 2013 post-Morsi constitution. Although their reasons are varied, they refrained from elaborating on how the articles of Sharia should be phrased in the their ideal constitution, and more importantly how they should be applied in governance.

With or without the presidential bid, Abul-Fotouh will remain one of the most perplexing and intriguing figures among Egyptian political leaders. For his supporters, he is principled, moderate, and dedicated to the goals and aspirations of the January 2011 revolution. For his opponents, he is an ambiguous politician with a grayish platform with a multifaceted personality, his views a mix of various shades ranging from a faded black to a darker white.

In a way, Abul-Fotouh is the Islamic version of Mohamed ElBaradei. He has a great ability to analyze the political situation, define the problems and even suggest solutions. However, he is limited in his ability to negotiate a compromise deal with both sides in order to defuse polarization, and translate solutions into reality. When things turn bad, he, like ElBaradei before him, plays the moral card and withdraws from the political arena. Politics is not just moralism; it is about achieving the right balance between idealism and realism, a skill that Abul-Fotouh, like many other politicians, is unable to master. Regardless of the current oppressive atmosphere in Egypt, former presidential candidate Abul-Fotouh has made the right decision not to run for president, as he cannot afford another heavy political defeat.