How a Morsi-Shafiq Runoff Could be Good for Egypt

Muslim Brotherhood candidate Mohammed Morsi came in first in the elections, with Ahmed Shafiq, a former Mubarak prime minister, following closely behind. Egyptian blogger Bassem Sabry says the only way to save the country is for revolutionaries to cooperate with a Brotherhood that commits itself to moderation. 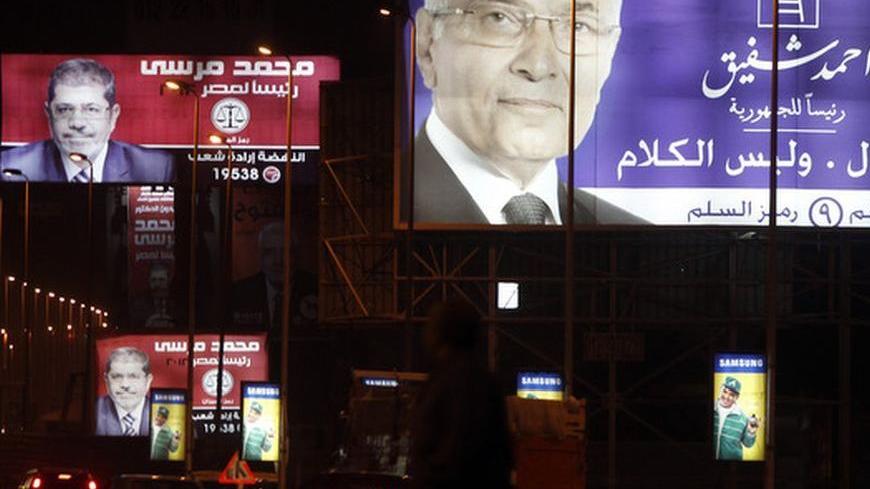 The first round of the Egyptian presidential election results has left both the Islamist and revolutionary political camps with a sense of pride and horrid disappointment.  For the Muslim Brotherhood, there is a sense of satisfaction that they managed to promote Mohamed Morsi, a non-star candidate, to the forefront of the vote with a respectable 25.30 percent of the vote.

However, the massive vote count for Ahmed Shafiq, coming at a close second with 23.74 percent, seems to, at least partially, represent significant frustration with the immediate state of Egypt after the revolution as well as a direct backlash against the current, most dominant and visible force in post-revolutionary Egypt, the Brotherhood and (slightly less so) the Salafists. It is a considerably angry and reactionary blow to these Islamist forces, and it is happening only months after they collectively won nearly 75 percent of the seats in Egypt’s parliamentary elections. Of course, it must be said that it seemingly also represents some dissatisfaction with other revolutionary forces as well, including the protesting street.

Add to that the surprisingly strong showing by non-Islamist candidates such as neo-Nasserist Hamdeen Sabbahi and (the astonishingly under-performing, yet still somewhat strong) Amr Moussa, and a starkly different image is presented than that of the unchallenged Islamist domination of the parliamentary elections.

For revolutionary and non-Islamist Egyptians, the first round of the presidential elections were also a mixed affair. There is immense pride in the sudden meteoric rise of Hamdeen Sabbahi, and somewhat in the strong showing of moderate Abul-Fotouh, who some consider as post-Islamist rather than Islamist.  But there is genuine disappointment at Sabbahi and Abul-Fotouh’s loss, especially the narrow margin of less than 2 percent. There is a true sense of a missed historic opportunity, especially had there been success with the proposal that the revolutionary forces unit behind one so-called “Revolutionary Candidate.”

There is now a sense of heavy-hearted confusion as more progressive and secular-leaning revolutionary Egyptians find themselves torn between three painful options.

The first option would be to vote for the Brotherhood’s Mohamed Morsi. This would involve voting for what these revolutionaries see as a hungry and arguably increasingly-conservative political machine behind him that has tried to dominate the political process since the parliamentary elections, which is at odds with many of their beliefs and ideals. They need only remember the recent showdown over the Brotherhood’s attempts to stack the committee responsible for writing the next constitution with their own FJP members, as well as Al-Nour and other conservatively-affiliated figures to be reminded of what is at stake.

The second option open to the progressive revolutionaries is to vote for a secular-leaning candidate who represents the autocratic regime they fought with their lives to bring down, and whose victory would be a blow to the revolution and everything it stood for.

The third option would be to boycott the elections altogether.  This would probably not generate enough of a force on the ground, yet would potentially harm prospects of amicable long-term political cooperation with the Muslim Brotherhood; cooperation which seems necessary for any collective national reconstruction effort.

But the Brotherhood now seems to have realized the delicate situation it is unexpectedly in. At least half of the country (or at least half of the voters) prefer or are open to non-conservative candidates, even reactionary ones. Further, that same half seems angry and distrustful towards the Brothers and what has been seen by some as overly-aggressive strides towards political dominance. A common statement I have heard in multiple variations over the past few weeks by people from different walks of life was: “How can the Muslim Brotherhood claim to represent morality when they lied to us on more than one occasion? They even said they wouldn’t field a presidential candidate or go after all of the seats of parliament, and then they broke those promises!"

The Brotherhood is now faced with three options as well. First, it could stay on its current course and maintain an independent campaign, but that would most likely lead to Ahmed Shafiq’s victory. Second, it could move toward employing more conservative-sounding rhetoric in hopes of decisively gathering all conservative votes, but that would possibly mean encouraging more people to unite against them or in boycott, again potentially leading Shafiq to victory.

The third, and seemingly already-chosen option, would entail the Brotherhood returning to a more progressive and reconciliatory tone. They would have to align with revolutionary candidates and forces to gain their endorsement and a significant percentage of their voters. In return, they would have to agree with the revolutionaries on a more fair and more progressive approach to writing the constitution and to its content. They could possibly compromise on a more liberal vice president, prime minister or cabinet composition that is not entirely dominated by the Brothers. They would also need to agree to long-term goals on the future of Egyptian human and civil rights, as well as some consensual major headline policy directions for Egypt.

At the time of the writing of these words, the Muslim Brotherhood has already called for a meeting between the defeated candidates, especially Sabbahi (who appears to have decided not to attend), Moussa and Abul-Fotouh. But even if the Brotherhood fails to muster such an alliance, the lessons learned from the first round of the presidential election experience are still not expected to be forgotten, and the margin of potential victory for Mohamed Morsi remains likely limited.

Thus, regardless of whether or not  the Muslim Brotherhood is successful in forging this alliance, it would either way find itself forced to adopt  a more moderate tone and reconciliatory political approach throughout the remainder of the elections and afterwards. They would also need to shift to working again on a more long-term basis rather than their more recent leaps toward capturing power quickly. In other words, they need to run a political marathon rather than sprint. And if either situation happens and the Muslim Brotherhood responds with this turn towards the center of the spectrum, then Egypt as a whole and the revolution in particular would have won one crucial victory: the country's current most dominant political power transforming, at least for a significant and painfully urgent while, into a more moderate and reconciliatory force.