Will Sisi reconcile with Brotherhood ahead of presidential poll?

Reports that President Abdel Fattah al-Sisi intends to reconcile with the Muslim Brotherhood’s leaders ahead of the presidential election have sparked debate in Egypt. 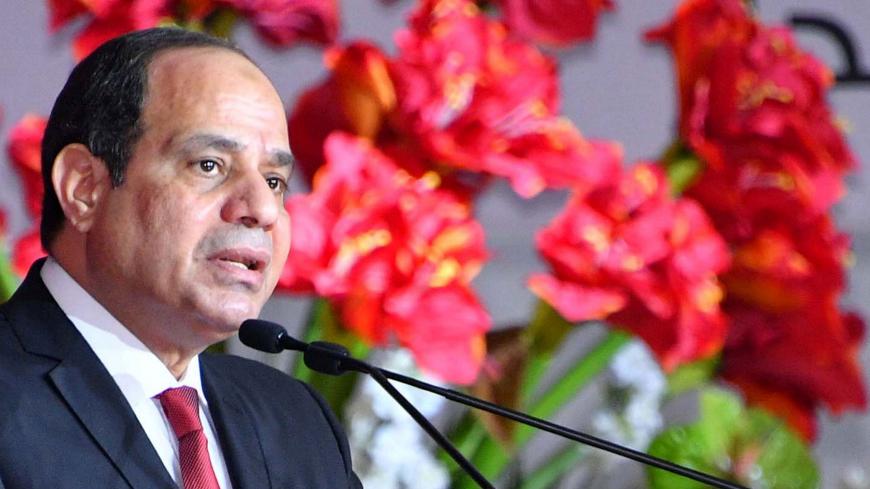 Egyptian President Abdel Fattah al-Sisi speaks during the closing session of Tale of a Homeland conference and announces his intention to run for a second term, Cairo, Egypt, Jan. 19, 2018. - The Egyptian Presidency/REUTERS

CAIRO — Salah Hasaballah, the head of the Freedom Party and parliament spokesman, kicked off the party’s Feb. 24 press conference to announce its endorsement for Egyptian President Abdel Fattah al-Sisi in the upcoming election. Al-Bawaba news quoted him as opening with, “President Sisi stood up to the Brotherhood and countered their attempts to seize power. He risked his own life to save Egyptians from destruction.” Hasaballah’s remarks show how strongly politicians and everyday citizens support Sisi just for being the Muslim Brotherhood’s adversary.

However, a Feb. 6 Bloomberg article cited Brotherhood sources saying Sisi intends to reconcile with the group ahead of the election. The piece has caused a flurry of reaction articles.

In a Feb. 7 al-Modon article, Muslim Brotherhood sources in Egypt were quoted as saying that Sisi seeks to reconcile with imprisoned Brotherhood leaders via mediators from military intelligence as part of a “deal whereby senior leaders will be freed in exchange for disengaging from politics.”

Bloomberg noted that Sisi dismissed the director of the Egyptian General Intelligence Directorate, Gen. Khaled Fawzy, who has taken a hard line against the Brotherhood, and jailed former military chief Gen. Sami Anan, his rival for the presidency who has strong ties with the Muslim Brotherhood. Anan, the report noted, has "promised to reopen the files of past verdicts against the Brotherhood, which he argued were politicized, in the hope of receiving their support in the upcoming election.” According to Bloomberg, "Sisi seems to believe that reconciliation with the Brotherhood is inevitable and is determined to ensure it benefits him and not a rival.”

Al-Monitor contacted Mahmoud Kabish, the former dean of the Faculty of Law at Cairo University, who said that neither a reconciliation with the Muslim Brotherhood nor a release of its imprisoned leaders would take place. The president does not have the powers to achieve either, and these matters are subject to judicial rulings. On the possibility of a presidential pardon, he answered, “Although the president is granted pardon powers, such a pardon is legally impossible at present. This is because most of the Brotherhood leaders continue to face lawsuits that are still being investigated. The prisoners cannot be pardoned until the investigation is over and sentences are issued.”

Imad Eddine Hussein, the editor-in-chief of Egypt's al-Shorouk and a writer focusing on political affairs, said in a Feb. 22 article for Deutsche Welle that many journalists and other observers question why the Egyptian security institutions are intensifying their crackdown on the Brotherhood at home even as Egypt is warming to Brotherhood affiliates abroad such as Hamas and Sudan's ruling National Congress party.

Hamas delegations paid several visits to Egypt last year and early 2018, holding meetings with officials in charge of the Palestinian reconciliation dossier and Egyptian intelligence. In February, hostilities eased between the Egyptian and Sudanese regimes following months of dispute over the Grand Renaissance Dam.

Hussein told Al-Monitor, “The Egyptian policy is against the Brotherhood and will not accept any extremist group in a political role. It, however, cannot force countries such as Palestine and Sudan to pursue the same policy. This is why the Egyptian authorities have dealt with the Brotherhood abroad in a way that serves Egyptian national security. It does not imply a prelude to a reconciliation at home." He called the Sudanese and Gazan parties' recognition of the current Egyptian regime, which replaced the Brotherhood's Mohammed Morsi during the June 2013 revolution, "a triumph for Sisi and the current regime."

Yousri El-Azbawi, a researcher for Al-Ahram Center for Political and Strategic Studies, offered another analysis of Bloomberg’s article. He told Al-Monitor that it is impossible for Sisi to reconcile with the Muslim Brotherhood at home because this matter is not exclusively in his hands. It also involves the judiciary and the wider Egyptian society, which is against the Brotherhood in general. He pointed out that such a reconciliation would do Sisi no good in the elections because it would lead all those who stand opposed to the Brotherhood such as Al-Azhar, Christians, all of the civil parties and even religious parties such as the Nour Party to oppose Sisi himself.

Azbawi went on to say that every now and then, fugitive Brotherhood leaders in Turkey, Sudan and Qatar, such as Mohamed Gamal Hishmat, Mahmoud Hussein, Mahmoud Ezzat and others, seek to promote rumors in their countries of refuge that they are still influential in Egyptian politics to continue receiving political and financial support there. They also seek to stir up tension between the Egyptian regime and some of the anti-Brotherhood regimes in the Gulf countries, particularly the UAE. Bloomberg itself pointed to Sisi’s fears that reconciliation with the Brotherhood would negatively affect his ties with the Gulf countries, especially the UAE.

Mohammed Sawdan, a representative of the Foreign Relations Committee of the Freedom and Justice Party, which has strong links to the Brotherhood, did not deny the facts as presented in the article. He told Al-Monitor, “Some of the state apparatuses have perhaps negotiated for a reconciliation with Brotherhood leaders. But I do believe that such a quest is not serious, because since the day Sisi seized power, his policy has been based on fully removing the Brotherhood from the landscape. Sisi's efforts as depicted in the article are nothing more than a maneuver by security and political apparatuses to persuade imprisoned Brotherhood leaders not to encourage their bases to support a candidate other than Sisi in the election.”