Egypt's Brotherhood, Sisi both put out feelers for reconciliation

While recent statements from Egyptian officials and Brotherhood members hint that a reconciliation could be in the works, some think both sides are merely testing their bases' reaction to the idea. 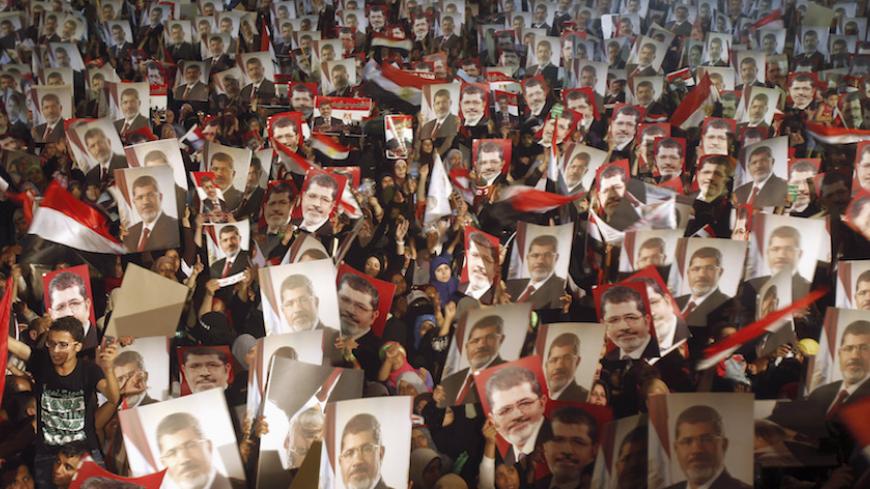 Members of the Muslim Brotherhood and supporters of Egypt's President Mohammed Morsi hold pictures of him as they react after the Egyptian army's statement was read out on state TV, at the Rabia al-Adawiya square in Cairo, July 3, 2013. Morsi was overthrown that day. - REUTERS/Khaled Abdullah

The word “reconciliation” has been dominating the Egyptian political scene for almost two weeks. Talk has revolved around the future of the relationship between the regime and the Muslim Brotherhood, which is facing the worst crackdown since its establishment.

Political discussions in Egypt are not what brought about this prevalent idea; rather, it emerged due to a number of coalesced factors, notably the statement of Legal and Parliamentary Affairs Minister Magdy al-Agaty, who said in an interview, “We can reconcile with a member of the Brotherhood as long as his hands are not stained with blood. [Brotherhood members] are Egyptians in the first place. Why don’t we make peace with them and integrate them into the fabric of the Egyptian people if they did not commit any crime?”

However, it was not long before this controversial issue came to the surface again when Mohamed Fayek, head of the National Council for Human Rights, said July 3, “There will be a presidential pardon soon for all the detained young people who were not involved in armed activities.”

Such statements cannot be made by people close to the regime without prior communication and coordination with the head of the regime. While some officials criticized Agaty’s statement, the criticism came from politicians who were neither as influential as Agaty nor in a ceremonial post like Fayek.

However, a source in the Egyptian parliament told Al-Monitor on condition of anonymity, “It is too early to talk about an explicit reconciliation with the Muslim Brotherhood, especially while the Egyptian regime is in a strong position and does not need to make any reconciliations.” The source, who is close to some influential quarters, added, “Agaty’s statement fell only within the context of putting the transitional justice law into effect,” indicating that his “communications affirm that there will be no reconciliation in that sense during this period.”

As for the Brotherhood, there were some indicatives that the reconciliation scenario is probable even if it did not take the previously stated form. The split, which the Brotherhood has been undergoing for almost a year, cast a shadow over its relationship with the current regime. The group, led by Brotherhood’s Secretary-General Mahmoud Hussein and acting Supreme Guide Mahmoud Ezzat, who has been in hiding since before the dispersal of the Rabia al-Adawiya sit-in, issued an 11-page report — which Al-Monitor obtained a copy of — that served as a “situation assessment” and tackled three scenarios of the reconciliation, accusing the other (Brotherhood) camp of adopting violence.

The report, which was issued to senior Brotherhood leaders, outraged a number of the movement’s young cadres after some parts of it were leaked. According to Ezz Eldeen Dwedar, a young Brotherhood member living abroad who opposes the idea of reconciliation, the young cadres considered this report “an introduction to a [coming] reconciliation over the bloodshed.”

In an attempt to explain his position, Dwedar said, “In light of the current balance of power, the proposed reconciliation projects are certainly disguised surrender. These projects are an attempt to save the two groups seeking to conclude the reconciliation: the leaders of the internally divided Brotherhood on one hand and [President Abdel Fattah al-] Sisi on the other. The first group has embroiled the Brotherhood in conflicts to the extent that it [the Brotherhood] can’t justify its attitude, afford the consequences of its own actions or have a vision to make the revolution successful. On the other hand, Sisi is suffering from a steep fall in popularity as well as internal conflicts among various quarters in his regime, not to mention his inability to handle or stop the threat of bankruptcy. Therefore, any reconciliation project will be a rebirth for Sisi and a safe exit for Brotherhood leaders.” Based on this, Dwedar stressed that he refused the idea of negotiations.

“Rather, we should revive the revolution, rearrange [our] strengths, review the enemy’s weaknesses, reshape the international and domestic map of alliances, and work on weakening Sisi in order to get him and his group out of the scene and defeated as soon as possible,” Dwedar said.

However, Talaat Fahmy, a Brotherhood spokesman affiliated with the Hussein and Ezzat front, told Al-Monitor in reference to Agaty’s statement, “Any institution considers [different] scenarios for the future. Constructing scenarios does not mean that you prefer or adopt a certain one.”

Yasser Fathy, a young Brotherhood member who calls for change, explained the points of disagreement inside the group to Al-Monitor. “There is no doubt that there are disagreements as to the vision and how to deal with the current regime. There are those who tend to be more vigilant and agree to live with this repressive regime. … The disagreement is between those who agree to live with a state of weakness and helplessness on one hand and a large segment of the Brotherhood and the Egyptian society that seek not to focus only on slogans but to work on restructuring the political discourse. This segment wants to look deeply into the society’s problems, the essence and goals of the January 25 Revolution, and the relationship with the outer world on the regional and international levels.”

However, what about politicians who are close to the Brotherhood? Veteran Egyptian politician and former presidential candidate Ayman Nour told Al-Monitor that he rules out the possibility of making any reconciliations while Sisi is in power. “Egypt needs a genuine project to overcome authoritarianism,” he said.

Nour pointed out that the statements issued by parties associated with the regime are “trial balloons and not a potential vision or a distinctive initiative.”

“Reconciliation and transitional justice are both mentioned in the July 3 statement and the constitution of 2014. However, the regime wants to act as if it was the winner, despite the fact that the crisis is more complex. The crisis is not only between the regime and the Muslim Brotherhood. Rather, it is between all the components of the society including the Brotherhood, which is also divided internally,” Nour said.

In light of the above, it is evident that all sides deny attempts at “reconciliation,” arguing that what is happening is merely a consideration of the matter, i.e., a test to see how it will be received by the other. The regime, in the eyes of its opponents, is going through a major economic crisis that requires internal coherence and efforts to improve its image abroad in order to show that the crisis is on its way to being resolved. However, many observers believe that the regime is in a position of strength and merely seeks to subdue the Brotherhood and aggravate its split, not to make peace with it.

Also, a Turkey-based Brotherhood source — who is close to the decision-making circles — told Al-Monitor, “The old conservative camp [in the Brotherhood] is willing to come to an undisclosed agreement with the regime in the hope all detainees will be released and the movement will gradually return to the public sphere.” The source, who preferred anonymity, said, “What prevents this agreement from being concluded is the presence of Sisi in the heart of the [political] scene as well as a segment inside the Brotherhood and among Egyptians that opposes this idea, as this reconciliation might lead to the abandonment of certain political demands, the political legitimacy of Morsi and other issues that have been the key driver of the discourse of the Brotherhood’s leaders since the coup.”

The source added, “If there will be a reconciliation, it is not going to be classical.”

This point of view is supported by the stance of many detained Brotherhood members. For instance, Israa, a detainee’s wife who spoke to Al-Monitor on condition that only her first name be used, said, “The issue is not the reconciliation with the regime; rather, it is about taking a step back and reviewing all the occurrences that took place in the past three years — what we have gained and what we have lost — to see if we have achieved anything in return for all the martyrs, detainees and energy exerted. … We must step back and rearrange the lines and correct the mistakes after admitting them first.”

“The idea of releasing the detainees is dominant among a large segment of the Brotherhood. This segment supports reconciliation,” Israa said, indicating that “there is another current that does not accept the deaths or prison sentences, yet it accepts any political concession in return for achieving a solution to the human rights crisis.”

However, what hinders the solution? And what do the detainees think?

“My husband and many other detainees believe that any sign of concession will aggravate the crackdown on the Brotherhood. Therefore, the detainees are divided between whether to continue the struggle against the regime or make concessions, even undisclosed,” she added.

Fahmy, commenting on these ideas, said, “The coup regime wants to force the detainees to change their convictions and haggle over their freedom, which is unacceptable. As for concessions, we have nothing but our principles. Do they want us to give up on our principles?”

“We welcome any solution that comes within a national framework where the Egyptian people have the authority,” Fahmy concluded.