Putting aside internal differences, Egypt's Muslim Brotherhood united behind the Turkish government to thwart a coup attempt July 15, but questions remain about how important the group's support is for the Turkish president. 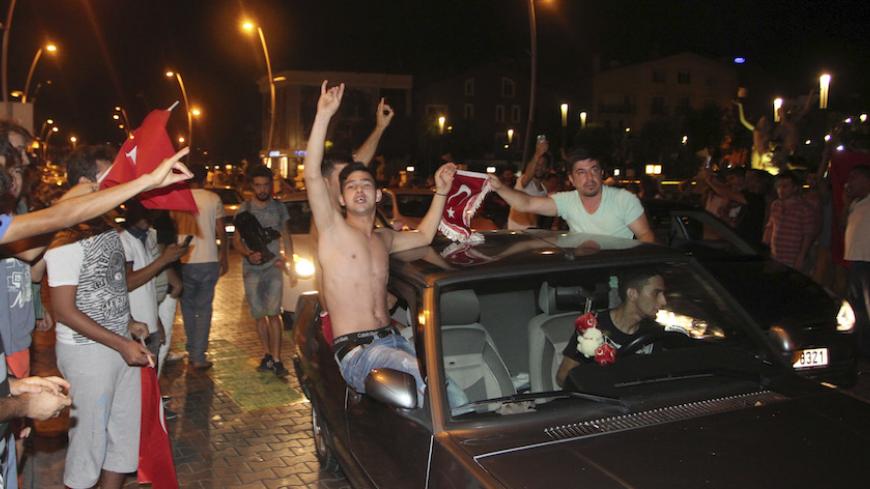 Egypt's outcast Muslim Brotherhood would be hard-pressed to find a country more welcoming than Turkey, and it appears the group's support might have played a role in quashing the July 15 attempted coup.

Ankara has not demanded the departure of any of the group’s leaders, as Qatar did in September 2014, nor has it opened numerous investigations into the extent of the Brotherhood's involvement in terrorism, as Britain has. Perhaps that is what drove the Brotherhood to call upon Egyptians and Syrians living in Turkey, as well as governments around the world and Turkish civil society, to defend Turkish President Recep Tayyip Erdogan after he was targeted by a coup launched by some members of the army.

On its official webpage, the Muslim Brotherhood posted a statement dated July 16 saying it would stand in solidarity with the Turkish people and their right to rally around their elected government. The statement also called upon “all free people around the world, peoples, civil society groups and elected governments to support democracy in every nation equally and reject backward [rebel] ideas.”

Amr Farrag, one of the founders of the Rasd Network, which supports the Muslim Brotherhood, wrote the following on his personal Facebook page: “I call on the Arab youth generally, and the Egyptian and Syrian youth present in Turkey [specifically], to go out into the street and support [Erdogan] in confronting the military coup against him by the Turkish army. The coup against Erdogan now taking place in Turkey will have a major impact on the continued existence of the Brotherhood in Turkey. Go out and try to defend the last place where you can live with a bit of dignity and peace of mind.”

Al-Monitor spoke with experts on Turkish affairs and Islamist movements, including the Muslim Brotherhood, about the Brotherhood’s capacity for mobilizing on behalf of Erdogan in Turkey and exerting influence on Turkish politics. Salah Labib, a researcher specializing in Turkish affairs at the Arab Center for Humanistic Studies, told Al-Monitor it is difficult to gauge the extent of the Brotherhood's influence. “There must be clear facts upon which to base an analysis," he said.

However, he said the Brotherhood might have tried to help Erdogan to prove its importance in Turkey, especially since Turkey's government has been seeking to reconcile with some other states, especially Egypt. "Recently, this orientation toward reconciliation had produced a marked improvement in relations between Turkey on the one hand and both Russia and Israel on the other,” he said.

Mohamed Abd al-Qadir, chief editor of Turkish Affairs magazine and an analyst at Al-Ahram Center for Political & Strategic Studies, told Al-Monitor he is certain the Brotherhood’s leadership and young people in Turkey played a significant role in mobilizing Egyptians and Syrians.

"The Syrians [living in Turkey] number around 2.7 million, and the Egyptians’ numbers are also massive, with a significant portion of them being students who are [beneficiaries of] Turkish scholarships and initiatives." These young people in Turkey are in contact with a wide network of their counterparts in Egypt and Syria, who "have a great deal of experience in mobilizing in the streets through [the social media networks] that spread throughout Egypt following the January [2011] revolution and during the Brotherhood’s rule," Qadir said.

"They [use the networks] to spread notions of participating in some demonstrations and protests." Much of their knowledge is being extended to Turkey, "and they have a great deal of experience in dealing with military operations,” he added.

However, Kamal Habib, a specialist in Islamist movements, said it is difficult for the Brotherhood to mobilize in Turkey because its numbers there are not large enough to cover many cities, and a high proportion of their leaders are old and not particularly mobile.

He noted, though, that these leaders, through their contacts with sovereign entities loyal to Erdogan in Turkey, might have offered advice concerning how to initiate and secure a mobilization.

The Brotherhood’s traditional leadership, second-tier leaders and young members all united around a single stance concerning the attempted coup. This testified to the strategic importance they place on Erdogan’s regime. However, the attempted coup did not reveal the full extent of the Brotherhood’s importance to Erdogan in terms of the mobilization that defended him. So the Brotherhood is left to wonder: How will Erdogan deal with Egyptian President Abdel Fattah al-Sisi’s demand that, for any reconciliation, Brotherhood leaders must be extradited back to Egypt?