Will arrest of leader disable Muslim Brotherhood in Egypt?

Egypt recently arrested acting Muslim Brotherhood leader Mahmoud Ezzat, raising many questions about the fate of the organization in the country. 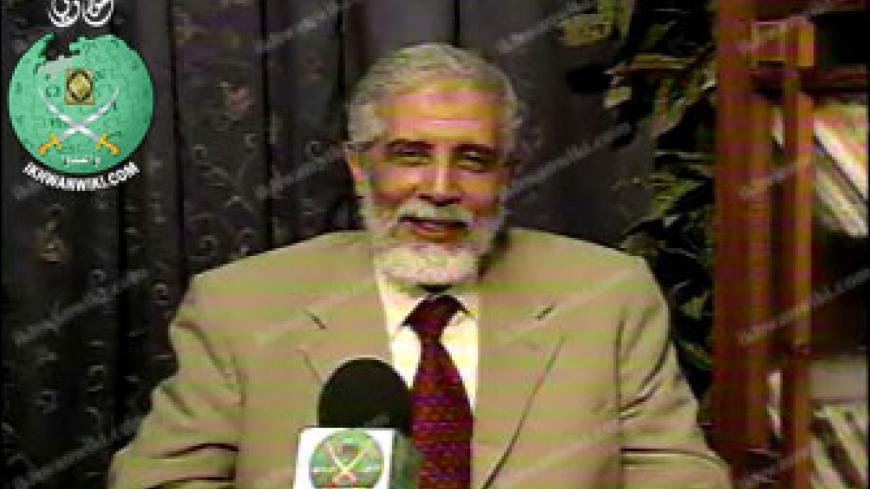 CAIRO — The ongoing struggle between Egyptian authorities and the Muslim Brotherhood took a new turn Aug. 28 when the Interior Ministry announced the arrest of the Brotherhood’s acting general guide and acting leader Mahmoud Ezzat inside an apartment in the Fifth Settlement district of New Cairo. Pro-regime media quickly described the arrest as a “valuable catch,” and considered it the end of the organization that has exhausted the authorities since the events of July 3, 2013, that ended Brotherhood rule in Egypt.

The Interior Ministry statement said Ezzat oversaw the management of terrorist and sabotage operations that the Brotherhood carried out over the years, namely the assassination of Prosecutor General Hisham Barakat in a 2015 car bombing and the 2016 assassination attempt on Assistant Prosecutor General Zakaria Abdel Aziz, also via a car bombing. The ministry said Ezzat was responsible for managing the organization’s funds, supporting and financing suspicious international organizations and using them to offend the country and exert pressure on it.

The Muslim Brotherhood issued a statement Aug. 29, saying that it will carry on and that the organization remains committed to its principles and will not deviate or stray from its path, whatever the sacrifices and consequences.

On Aug. 25, Ibrahim Munir, the Brotherhood’s deputy general guide, had launched a fierce attack against Egyptian authorities in an interview with Al Jazeera, saying, “Recent months have shown that the regime’s role in the region has come to an end, leaving it standing on the ruins of the chaos it has brought upon Egypt.” He stressed the organization’s absolute refusal to conclude any deals to reconcile with authorities.

Ezzat’s arrest raise many questions about the fate of the Muslim Brotherhood in Egypt, and whether or not it means the virtual end of the organization’s presence in the country, and how such a development could affect the possibility of reconciliation between the organization and the regime.

Habib said that after Badie's arrest, Ezzat took charge of the organization’s activities and financing, as well as negotiations with the regime, indicating that Ezzat's arrest eliminates any possibility of reconciliation with the state in the near future.

On June 30, 2013, protesters took to the streets in Cairo and massive demonstrations spread to several Egyptian cities, calling for the ouster of President Mohammed Morsi and demanding early presidential elections. On July 3, 2013, the army assumed power over the country.

Following the fall of Brotherhood rule, authorities launched a crackdown on the organization in an attempt to limit its role in Egypt, and arrested Badie on Aug. 20, 2013, after which Ezzat assumed the position of acting guide.

On Sept. 23, 2013, the Cairo Court for Urgent Matters decided to ban the organization's activities, seize its headquarters and freeze its funds.

On Dec. 25, 2013, the Egyptian government announced a decision declaring the Brotherhood a “terrorist organization.”

Habib said, “There is no doubt that multiple attempts at reconciliation between the organization and the regime have been made in recent years, but Ezzat has always refused to make any concessions and insisted on bringing down the current regime. Most recently, the Brotherhood responded to Turkish President Recep Erdogan's [latest] attempt to court Egypt in the struggle over the Mediterranean by trying to mobilize the opposition to confront the Egyptian regime.”

On Aug. 14, Erdogan expressed surprise at Egypt's position in favor of Greece in the eastern Mediterranean crisis, saying, “I have difficulty in understanding Egypt; the positions of the Egyptian and Turkish people regarding each other are not the same as the Egyptian people's solidarity with the Greek people, for our civilizations and principles are closer to each other than they are to Greece’s, and the Egyptian government must understand that.”

In response, the Brotherhood announced Aug. 15 its support for calls to unify all opposition political entities abroad, considering that if these calls succeeded, the Egyptian revolution would find its way once again with greater influence and be more widespread at home and abroad.

Habib said he believes Ezzat’s arrest puts the organization in a conundrum in terms of who will assume the position of acting guide, especially since most of its leaders in Egypt are either in prison — such as Badie and his deputy Khairat al-Shater — or dead. For example, prominent leader Essam al-Erian died in prison Aug. 13.

“The Brotherhood’s jurisprudence requires that whoever assumes the position of guide or acting leader must be from Egypt,” Habib said, noting that it is likely that the organization will resort to “the jurisprudence of necessity” to resolve this dilemma and appoint one of its leaders abroad.

Meanwhile, member of parliament Ahmed Helmy al-Sharif, head of the parliamentary committee of the Congress Party and deputy head of the Support Egypt Coalition, told Akhbar el-Yom on Aug. 28 that Ezzat’s arrest is the true end of this organization as he was the man behind various terrorist and criminal acts the Brotherhood has carried out in recent years.

However, Maher Farghali, an independent researcher on Islamic movements, told Al-Monitor that while the arrest will affect and confuse the organization’s ranks, it will not lead to the Brotherhood’s demise as some might claim, noting that the organization has suffered many blows over the decades but survived. Farghali said the Brotherhood's convictions will remain the same.

He added, “Ezzat was not an ordinary man within the Brotherhood; he was primarily responsible for the organization’s education sector, the youth formation within its ranks and its restructuring after June 30, 2013. However, I expect that the group will maintain its position, and implement its agenda at home and abroad in an attempt to mobilize against the regime, and I stress that this security blow will not eliminate it, as some claim.”