The recent police killing of a former Muslim Brotherhood leader wanted by the government could cause a violent backlash in the short term, but might help bring about a reconciliation. 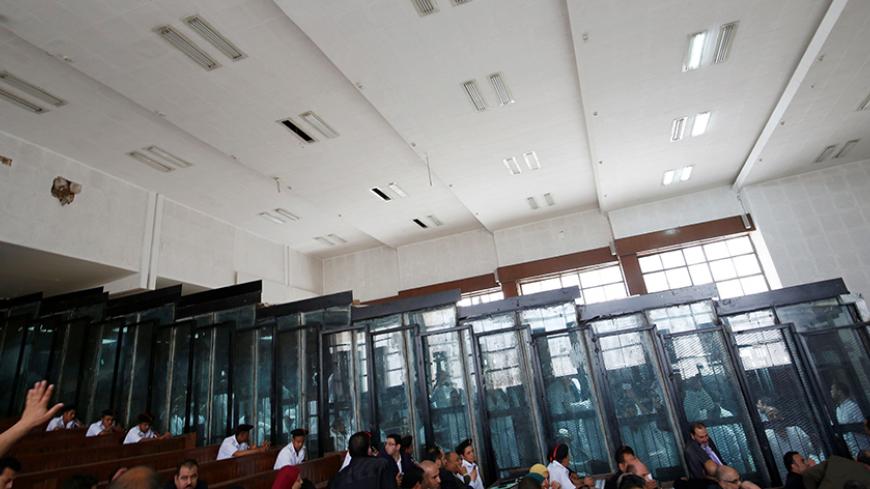 Muslim Brotherhood members stand trial at a court on the outskirts of Cairo on May 31, 2016, for an armed sit-in at Rabia al-Awadiyah Square. - REUTERS/Amr Abdallah Dalsh

There have been persistent rumors, and denials, in recent months that the Egyptian government and the Muslim Brotherhood have been considering a reconciliation to end their bitter, yearslong rivalry. Now observers are wondering how the recent killing of a former, but still influential, Brotherhood leader might affect the situation.

Egypt’s Interior Ministry said earlier this month that Mohamed Kamal, a former member of the Brotherhood’s upper-echelon leadership known as the Guidance Bureau, had been killed Oct. 3. The police described Kamal as being responsible for the killing of Col. Wa’il Tahun of the State Security Investigations Service.

Police said Kamal died in an armed clash with security forces while they attempted to arrest him, but the Brotherhood maintains that Kamal was executed after he surrendered.

Kamal’s death raises a number of questions concerning the potential for reconciliation and alignment between the ruling regime and the Muslim Brotherhood. It could complicate the group’s already-severe internal split, which has created two factions.

The first faction, formed by Kamal and Brotherhood foreign office director Ahmad Abd ar-Rahman, is supported by a group of younger members. Mohammad Muntasir was appointed by this faction as its official spokesman. This group formed after former Egyptian President Mohammed Morsi was ousted by the military in July 2013 and a number of Brotherhood leaders were imprisoned, with others fleeing abroad. This younger group adopted the “revolutionary movement” model, which Brotherhood detractors refer to as terrorist operations.

The other group, which has been labeled by some as the “old guard,” is led by Mahmoud Ezzat, who is the Brotherhood’s interim “supreme guide,” and by Secretary-General Mahmoud Hussein. They have declared that the Brotherhood will adhere to a peaceful approach.

Kamal had announced his resignation from all Brotherhood administrative posts in May due to the disputes between the two wings. Until then, he held the post of president of the Brotherhood’s “crisis-management committee,” or the “high administrative committee,” in which he had discharged the Brotherhood’s affairs since February 2014. It was in that capacity that he released a statement explaining the reasons for his resignation.

Egyptian police accused Kamal of being the founder of the Brotherhood’s “armed wing” and its special committees, as well as supervising the group’s administration and planning its offensive operations, according to an Interior Ministry statement. Some of the most prominent of those operations included the assassinations of Tahun and former Prosecutor General Hisham Barakat; the slayings of numerous police officers, policemen and members of the armed forces; and the attempted assassination of former Grand Mufti Ali Gomaa. Verdicts were issued against Kamal in many of these cases.

Kamal’s killing raises many questions about the future of the Muslim Brotherhood and particularly the revolutionary movement wing. Will his death pave the way to greater understanding and alignment between the latter and the ruling regime?

Samih Eid, a researcher focusing on Islamist movements, told Al-Monitor, “Kamal leaned toward the thinking of the group’s younger members, those who favored what they called ‘revolutionary action,’ which is really committing terrorist operations against the police as a form of reprisal.”

He added, “Kamal helped to form the special committees and organize those operations. He assumed leadership of the Crisis [Management] Committee, which was formed because so many of the Brotherhood’s leaders were imprisoned or fled. Many disputes broke out between the Brotherhood members inside [Kamal’s faction], and the members in prison and abroad. That persisted until Kamal resigned his membership in the Guidance Office.”

Eid said Muntasir’s statements, “which absolutely did not come out without Kamal’s approval,” did indeed express the violent revolutionary approach. However, he said accusations against Kamal have been exaggerated to an extent, such as blaming him in the assassination of Barakat and perhaps his involvement in the bombing of electricity transmission towers.

“Kamal’s wing was weakened in the recent past because Mahmoud Ezzat, the interim supreme guide, maintained control of 95% of the organization, and financial support was withheld from a number of those who Kamal controlled,” Eid said.

Regarding a prospective reconciliation between the Brotherhood and the state following Kamal’s killing, Eid says the factions of Ezzat’s old guard communicate with foreign and regional powers such as Saudi Arabia and other states, while the United States and Britain are in contact with the ruling regime in Egypt.

He said, “Many of these regional powers support the Brotherhood in not overtly involving itself in violence. That was the approach that was adopted by Ezzat’s faction. Therefore, Kamal’s killing [works] to their benefit. And, absolutely, this event will help produce a settlement or mutual understanding.”