Following reconciliation with Israel, will Turkey revive ties with Cairo next?

While Turkish Prime Minister Binali Yildirim expressed the desire for his country and Egypt to become closer politically and economically, Egyptian officials have reservations in this regard. 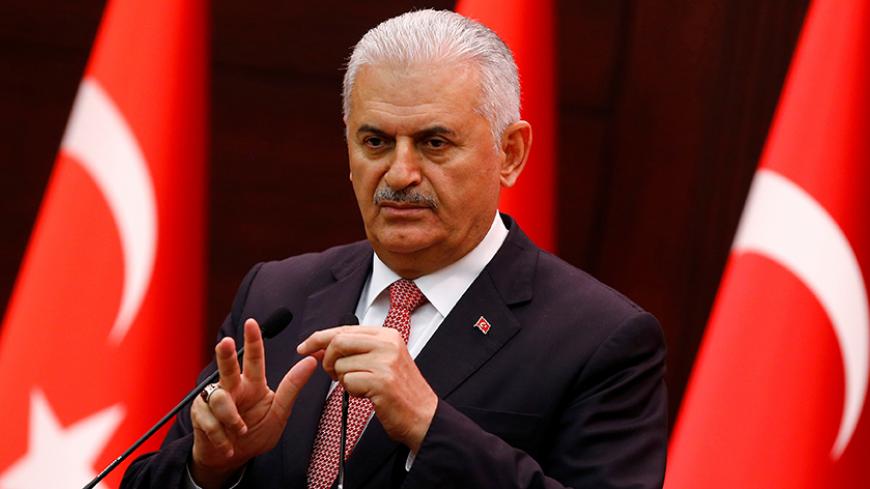 "If we set to the side the manner in which the regime in Egypt was changed, and the wrongs inflicted upon [former Egyptian President Mohammed] Morsi and his circle, then there is nothing standing in the way of developing ties between us.” Those were the words of Turkish Prime Minister Binali Yildirim on the same day that his country signed an agreement normalizing relations with Israel.

In regard to the possibility that in the near future reciprocal visits by Turkish and Egyptian senior officials could take place, Yildirim told the official Turkish press agency Anatolia, “It is possible to organize mutual visits involving officials and businessmen of the two countries, and mutual communications concerning [affairs in] the military realm.”

The Turkish side also hinted at a gradual restoration of ties with Egypt. "It is possible for our investors to travel to Egypt and develop their investments. This might lead in the future to a thawing of the climate [that in turn might lead] to a normalization of relations, and even of relations at the ministerial level. There is nothing preventing this from happening and we harbor no reservations concerning this matter," Yildirim said.

In response to that initiative, the Egyptian Foreign Ministry issued an official statement the same day expressing its discomfort with the ongoing contradictions in Turkish statements and positions.

“The oscillation [tension] between expressing a willingness to cultivate economic and cultural relations with Cairo, while still continuing to refuse to recognize the legitimacy of the June 30 Revolution — and the political situations and legitimate institutions chosen by the Egyptian people that have arisen in its wake — indicate the need for the Turkish leadership to recognize the June 30 Revolution as a precondition for repairing ties,” the statement said.

It continued, “Though we welcome every effort seeking to improve Turkey’s relationship with Egypt, it must be clear that recognition of the legitimate will of the Egyptian people as represented by the June 30 Revolution and the resulting assumption by legitimate institutions of responsibility for administering the country is inevitable and necessary. Working alongside these institutions and engaging with them is the starting point for improving Turkey’s relations with Egypt.”

After maintaining an initial period of silence, Turkish President Recep Tayyip Erdogan on July 5 — while attending an Eid al-Fitr prayer service inside an Istanbul mosque — said, “We have no problems with the Egyptian people, the problems lie with the administration, and particularly with the president of the coup, Abdel Fattah al-Sisi.”

Erdogan voiced his repudiation of the verdicts handed down by Egyptian courts concerning the leaders of the Muslim Brotherhood, which Egypt has officially designated as a terrorist organization. In his words, “I don’t believe these decisions are correct, for acquiescing in sin is itself a sin, and the verdicts issued against Morsi and the others are not supported by any evidence, nor are they substantiated by any documents.”

In response to Erdogan's statements, Ahmad Abu Zayyid, an adviser and official spokesman for the Egyptian Foreign Ministry, said, “Egypt has reservations about working alongside the Turkish leadership that insists on adopting floundering regional policies. We want to remind the Turkish side of something that no one ought to forget: The Egyptian people are the ones who have chosen their leadership — in free and democratic elections.”

Relations between Cairo and Ankara have grown tense ever since Turkey refused to recognize the revolution of June 30, 2013. Millions of Egyptians participated in the uprising, when the Egyptian army answered the people’s call to oust Morsi, a leader of the Muslim Brotherhood, from power. Ankara considered this to be a “military coup” and cut ties with Cairo after the latter declared the Turkish ambassador persona non grata.

A report by the Egyptian Central Bank revealed that trade between the two countries increased 49% in the period between July and December of the 2014-2015 fiscal year, reaching $1.82 billion. Egyptian imports originating in Turkey reached $1.327 billion, while Egyptian exports to Turkey were $514.7 million.

Adel Lamie, the head of the Egyptian-Turkish Business Council, told Al-Monitor, “The mutual trade between Cairo and Ankara has reached more than $3.5 billion and the investments between the two countries has reached $2 billion. Moreover, no Turkish companies have shut their doors [in Egypt] since the revolution on June 30.”

Egyptian Ambassador Mohamed El-Orabi, the head of the parliament's Foreign Relations Committee, said, “Erdogan is trying to pressure Egypt, believing that it will race [to accept] any initiative without studying it. He does not understand that Egypt does not need strong ties with Turkey.”

He told Al-Monitor, “There will not be any reconciliation as long as the Turkish president continues his policy of opposing the will of the Egyptian people, who chose its current leadership to head the country and represent it around the world. There are fundamental disagreements between the two leaderships that make it difficult to come to any kind of reconciliation.”

He added, “Erdogan is chasing after an illusion, seeking to pressure the Egyptian authorities [in an attempt] to reduce the sentences being issued against the Muslim Brotherhood’s leadership, or bring about a rapprochement between the Egyptian regime and the Brotherhood to return [the latter] into the political arena in a natural way.”

For his part, Mustafa Zahran, a researcher in Turkish affairs, told Al-Monitor, “Erdogan has a phobia of coups, especially since Turkey has suffered from military coups over half a century.”

He added, “The Kingdom of Saudi Arabia has clear aspirations to facilitate a reconciliation between Egypt and Turkey. This became obvious after Saudi King Salman bin Abdul-Aziz [Al Saud] made a direct appeal to Turkey, after completing his visit to Egypt.” During the course of the visit April 9-11, Salman signed an agreement that transferred ownership of the islands of Tiran and Sanafir from Egypt to Saudi Arabia.

“Turkey needs a strong state of Egypt’s caliber to achieve [meaningful] cooperation in the field of counterterrorism. This will [eventually] cause it to put the issue of reconciliation with the Brotherhood to the side. It is also possible that it might cut down on the Brotherhood media activities on Turkish soil to placate Egypt. The reconciliation will take place between Cairo and Ankara in the near future,” Zahran said.

Haitham Abu Khalil, a human rights activist affiliated with the Muslim Brotherhood who lives in Turkey, said in a press statement June 28, “Reconciliation between Turkey and Egypt will happen quickly. Anything might happen when it comes to Egyptian dissidents living abroad. We must prepare for this moment.”

He added, “No one in the world of politics pays your bill for free. I believe that as long as we don’t do anything, and there are significant differences that Turkey has noticed … then unfortunately, we will be at the mercy of events, and the worst will happen.”

Meanwhile, Salah Labib, a specialist in Turkish relations, told Al-Monitor, “Saudi Arabia is attempting to bring about a reconciliation between Egypt and Turkey to establish a strong Sunni alliance to confront rising Iranian influence in the Middle East and the Islamic State."

He said that since becoming prime minister, Yildirim has sought to bring about a reconciliation and opening to the rest of the world. In addition, Yildirim’s desire has come to fruition in the normalization of relations with Israel, despite Ankara’s support for Hamas — which Israel considers a terrorist group — and in the resumption of relations with Russia, even though it holds to its position on the Syrian crisis.

"It seems that Turkey wants reconciliation with Egypt [even at the cost of] setting the issue of the Muslim Brotherhood to the side,” Labib concluded.