Why Sisi, Erdogan won't be making up anytime soon

Relations between Egypt and Turkey may remain cold as long as Cairo continues to repress the Muslim Brotherhood. 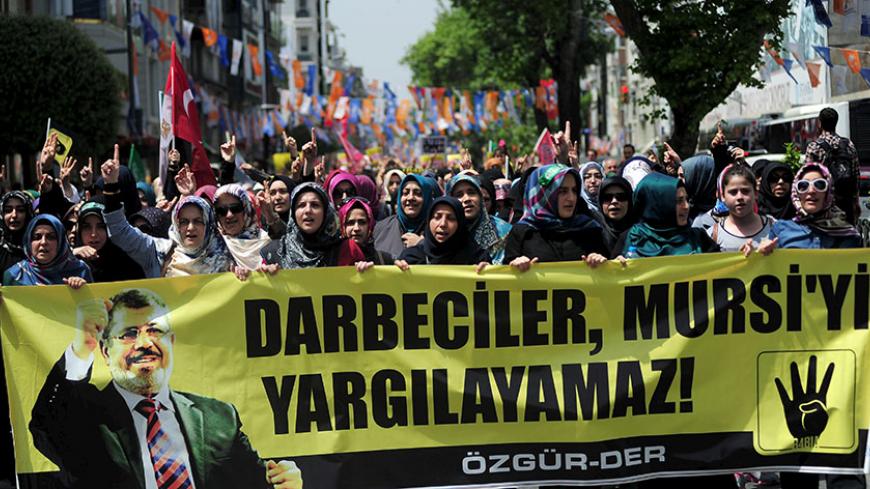 Pro-Islamist demonstrators hold a banner that reads "Coup leaders can't put Morsi on trial" during a protest in support of former President Mohammed Morsi at the courtyard of the Fatih mosque in Istanbul, Turkey, May 17, 2015. - REUTERS/Yagiz Karahan

In the last couple of weeks, Ankara has reconciled with two powers it has had rather deleterious relationships with: Israel and Russia. Is Egypt, a key remaining antagonist of Turkey on the international stage, on the brink of finding itself in the midst of a new relationship as well?

Cairo and Ankara have found themselves on the outs since mid-2013 following the removal by the Egyptian military of Mohammed Morsi from the Egyptian presidency. Morsi and his Muslim Brotherhood movement were close to President Recep Tayyip Erdogan and his ruling Justice and Development Party (AKP), and the overthrow of his presidency was deeply opposed on a variety of levels by Turkish leaders. The arrest and detention of scores of Brotherhood members and supporters by the Egyptian state following the overthrow only ensured that the relationship suffered further. That crackdown included the forced dispersal of the pro-Morsi sit-ins at the Rabia al-Adawiya Mosque and Nahda Square in Cairo, where around 1,000 Morsi supporters were killed by Egyptian security forces — according to international and Egyptian human rights organizations — and the 2014 resignation of Egyptian Prime Minister Hazem el-Beblawi.

Since 2013, Egypt’s ruling establishment has been viewed highly negatively by Ankara, and Brotherhood exiles and Morsi supporters have found a great deal of support within Turkey. Conversely, Erdogan and his political party have also been portrayed adversely in Cairo, both by the state establishment and Egyptian media. Ankara has insisted that Morsi was removed illegitimately and ought to be reinstated, while Cairo demands that Turkey recognize the military removal of Morsi be recognized as a "revolution" as it was preceded by widespread protests against the Brotherhood. The differences would appear to be insurmountable — but are they?

Israel is deeply unpopular among Erdogan supporters for its stances against the Palestinians, with the West Bank and Gaza continuing to be under Israeli occupation. Moreover, Israeli forces killed a number of Turkish citizens aboard the Mavi Marmara solidarity Gaza Freedom Flotilla to Gaza in 2010. Russia supports the regime of Bashar al-Assad in Syria, while Turkey insists that the Syrian revolutionary uprising of 2011 is legitimate and should result in the ending of that regime. Ankara continues to support armed resistance to that regime, while Moscow provided critical military support to Assad’s forces. Yet, in both cases, despite the astounding death toll, particularly in Syria at the hands of Assad’s forces, Ankara resolved to reconcile. In terms of material damage, Israel and Russia have exacted more harm to both Palestine and Syria than Cairo has with regard to the Brotherhood.

In November 2013, the Turkish ambassador was expelled from Cairo, with Turkey then declaring the Egyptian ambassador persona non grata. Relations between the two countries then were handled by low-level diplomats from both countries. However, Ankara has gradually lessened its opposition to Cairo. Ankara first declared that junior Turkish ministers could engage with Cairo in 2015; this was followed by side meetings between the respective foreign ministers at international meetings. Following the reconciliations with Russia and Israel, AKP deputy Chairman Saban Disli declared that "relations with Egypt will hopefully be moderated.” Turkish Prime Minister Binali Yildirim said, "From Russia to Israel, Egypt to Syria, Iraq to Iran, EU countries to the US, we are determined to develop peaceful, friendly and practical ties with everyone.” Moreover, Turkish Foreign Minister Mevlut Cavusoglu also said in the past that Turkey was prepared to reinitialize diplomatic and economic ties with Egypt, saying that "a meeting at the ministerial level could be held."

There remain obstacles, nevertheless. Erdogan has explicitly attacked current Egyptian President Abdel Fattah al-Sisi on a variety of occasions, and the pro-Morsi four-fingered salute favored by Morsi supporters has been used by Erdogan as a poignant symbol in numerous public appearances. Sisi’s establishment continues to be furious at Ankara for its support of the Brotherhood, and both Egyptian and Turkish public opinion can be relied upon to oppose the other side.

At the same time, if Cairo can engage with Israel — particularly following the visit of its foreign minister (the first in almost a decade), which is significantly more unpopular in Egypt than in Turkey — then it is not beyond the realm of possibility for Cairo to engage with Ankara. If the AKP decides to engage with Cairo, then Turkish society is unlikely to put up much resistance. Both establishments can be rehabilitated if political leadership in both choose to lead in that direction.

What needs to happen for that to be a likely possibility? Both countries benefit economically from a stronger relationship, but the personal animosity between Erdogan and Sisi remains a key obstacle. A number of pro-Morsi television stations in Turkey have been shut down, and Ankara can make the argument that engagement with Cairo is more likely to produce positive leverage than the current strategy, which has not resulted in any noticeable change in Egyptian policy. If Cairo were to temper its policies against the Brotherhood, that would probably suffice in providing enough space for Ankara to reconcile with Cairo.

If Cairo continues to zealously repress the Brotherhood, however, reconciliation with Ankara will likely take longer — but even so, it is unlikely to be suspended indefinitely. In either case, full normalization of relations — with meetings between Sisi and Erdogan — is unlikely for the foreseeable future. In the absence of that, however, some normalizing gestures are likely — perhaps even on the level of senior ministers and the return of ambassadors.

Neither country has benefited in the international arena from the current cold relationship. The question is whether a critical mass of the establishment in both capitals sees a thawing of the relationship to be sufficiently in their interests. Ankara has exhibited signs of that already. The speed of reconciliation would seem to depend now squarely on Cairo, but Sisi’s administration hasn’t shown much interest as of yet.