The rapprochement between Ankara and Cairo has catalyzed internal rifts between exiled leaders of the Muslim Brotherhood. 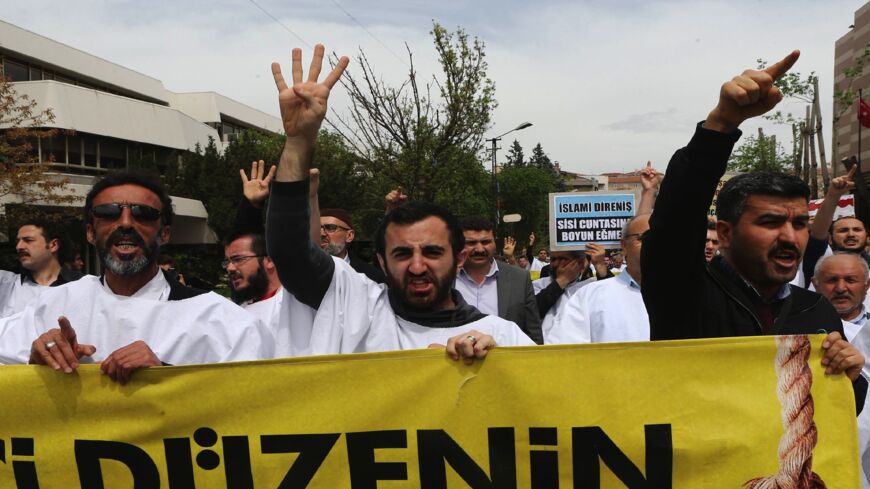 Supporters of the Egyptian Muslim Brotherhood flash the four-finger Rabia sign as they take part in a rally to protest against the death penalties for the members of the radical group in Egypt, in Ankara on April 25, 2014. - ADEM ALTAN/AFP via Getty Images

Amid a fledgling Turkish bid last April to normalize ties with Egypt, a delegation of exiled Muslim Brotherhood leaders held talks in Ankara, seeking assurances that they would not be thrown under the bus while Ibrahim Mounir, the acting supreme guide of the Brotherhood, thanked Turkey for its support. It was the harbinger of a storm brewing within the movement, but the issue generated little debate at the time. Since then, however, further signs have emerged that the Brotherhood’s choice of Turkey as a safe haven was hardly auspicious for the movement.

The disastrous collapse of the movement since its overthrow in Egypt in 2013 has become even more dramatic amid a leadership row between its two main diasporas in Istanbul and London. And while the Istanbul wing led by Mahmoud Hussein, the Brotherhood’s long-time secretary-general, and the Mounir-led London wing continue to bicker, the movement has seen the emergence of a third front: hundreds of jailed Brotherhood youths who accuse the exiled leaders in Istanbul and London of ignoring their plight in prison.

According to reports from Cairo, the jailed youths asked the grand imam of al-Azhar to mediate on their behalf in an Oct. 2 letter, calling for a formula of reconciliation with President Abdel Fattah al-Sisi’s administration that would get them out of prison and save their future away from the struggles of their leaders. The jailed youths had written a similar letter in 2019, asking the government to give them a second chance. Their move is perceived not only as a show of remorse but also an intent to break with the Brotherhood and accept the legitimacy of the Sisi administration.

Ankara’s quest for rapprochement with Cairo seems to have fueled the infighting within the Brotherhood. Ahead of its first fence-mending meeting with Cairo in May, the Turkish government pressed three Istanbul-based Egyptian opposition channels to dim their criticism of Cairo. Several political commentators were silenced. Though Ankara fell short of extraditing convicted figures such as Hussein, Yahya Musa and Alaa al-Samahi, some exiles have allegedly moved to Britain, Malaysia and the United States. Amr Abdel Moneim, an expert on fundamentalist movements, estimates that some 8,000 Brotherhood members and about 3,000 activists have taken refuge in Turkey.

The infighting hit the fan in October as Mounir dissolved the Brotherhood’s administrative office in Istanbul and removed Hussein and several other senior figures from their posts. The said figures, who are seen as hawks and control the movement’s Shura Council, faced accusations of financial and administrative corruption. The Istanbul wing rejected the decisions and retorted that, with Shura Council elections postponed by six months, Mounir was no longer a legitimate leader. The Mounir front saw the rejection as a “coup attempt.” Several initiatives to reconcile the two sides failed to bear fruit.

According to claims originating in Cairo, Hussein had received monthly grants of at least $1.7 million, and the funds were used to wage media wars and finance assassination plots and other violent acts in Egypt. The Istanbul wing was accused also of embezzlement and personal enrichment by the London wing.

Egyptian journalist and writer Ezzelden Abdo, who is familiar with the Brotherhood’s internal affairs, told Al-Monitor that the schism had been brewing for years and was the reason why several prominent figures, including Amr Darraj, who served as planning minister under ousted President Mohammed Morsi, quit the movement.

According to Abdo, long-running tensions between Hussein and other Brotherhood leaders crystallized over a disagreement on the ownership of a satellite TV channel established in Istanbul. Abdo emphasized two factors that deepened the rift: doubts and discords over the management of Brotherhood funds abroad, and the secretary-general’s “shameful” attitude in the face of Morsi’s “slow death” in prison.

For Abdo, the letter of the jailed youths to Al-Azhar sheikh is more an attempt to seek help to alleviate the suffering of Brotherhood members languishing in prison than a call for reconciliation with the Sisi administration. It shows how desperate the detainees have become “due to the preoccupation of the Brotherhood leaders abroad with their administrative and financial disputes and the preoccupation of some with concluding business deals with Turkish and Arab businessmen from the Gulf,” Abdo said, adding that the “gross neglect” of the detainees’ plight played into Sisi’s hands.

According to Abdo, the row between Mounir and Hussein could be termed as a “dispute over authority,” but many of the Brotherhood’s youth are concerned over the corruption and mismanagement allegations against Hussein. The journalist said there were also rumors that Hussein might be connected to the Egyptian security services because his brother got a “surprising and suspicious” promotion to major-general at the Interior Ministry shortly after the 2013 coup, while many members of the security forces lost their posts for having relatives in the Brotherhood. The Hussein-led wing, for its part, is accusing Mounir of working with British intelligence, he noted.

“These mutual accusations are dangerous and have negative effects on the future of the Brotherhood,” Abdo said, adding that the Brotherhood’s youth was hit by “a crisis of confidence” in the Istanbul- and London-based leaders, which might lead to more defections from the movement.

Egypt’s rapprochements with Turkey and Qatar fueled the conflicts in Brotherhood ranks, for “everyone knew that Sisi’s reconciliation with regimes and countries that [have backed the Brotherhood] would mean the death knell of the cause,” Abdo said.

According to the journalist, the Turkish government has not interfered officially in the Brotherhood’s disputes, but some “official and unofficial Turkish figures” have made efforts to bridge the differences and prevent the rift from growing. Yet Ankara “lost much popularity” among the Egyptian opposition after its pressure on media exiles to stop criticizing Sisi, including “indirect messages” that those who refuse to comply might face deportation, Abdo said.

A former senior member of the Brotherhood who requested anonymity agreed that many of the movement’s young members had lost confidence in the old guard after those who fled abroad failed to display an efficient leadership.

The youths' letter reflects their despair in prison and does not amount to a bid at reconciliation with the ruling establishment, the source said, adding that the sheikh of Al-Azhar was not on very good terms with Sisi to mediate and Sisi himself was unlikely to agree to any proposal.

The Brotherhood today is a “very weak” organization, both because of the post-coup crackdown and poor leadership, he said, stressing that the movement might never recover its former influence.

As for the impact of Ankara’s fence-mending with Cairo, he said he does not expect the Turkish government to extradite Brotherhood leaders to Egypt, even though it has asked Brotherhood channels to tone down criticism of Cairo.

As things stand at present, Ankara’s rapprochement with Cairo appears to have weakened the Brotherhood’s Istanbul wing, tipping the scale in favor of the London-based leaders. This could be suiting Ankara’s book as well as it seeks to shake off the Brotherhood burden but wants to avoid the appearance of a betrayal.